Stratospheric warming currently ongoing throughout this past summer and now is beginning to set the stage for this winter. 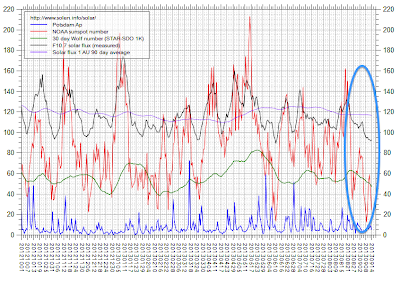 An examination around the solar activity reveals daily sunspot trends may be at fault. This chart shows many things at once, but we want to focus on the red line, which shows daily sunspot values. Take a look at the red line after the big spike in the middle of the chart. After that spike, sunspot values take a dive, and stay in slightly below normal territory for a while. This big drop-off happens in the month of June and into early July. Taking a second glance at the stratospheric temperatures, the 70 millibar level was constantly above normal throughout this period of low sunspot numbers. A second example can be found in the time during and right before the big spike on the sunspot graph. These above normal sunspot numbers happened between April and late May. Examination of the temperature chart shows consistently below normal values in this same time frame, meaning there may be a negative correlation between daily sunspot numbers and stratospheric temperatures.

I think much of the reason for the sunspot cycle connection to stratospheric warming has to do with the stratospheric Brewer-Dobson Circulation, a dramatic peak or minimum in solar cycle activity, like what is experienced in the minimums/maximums of solar cycles, can dramatically alter this cycle in which leads to a dramatic piling up of air in the stratosphere in the poles where in ozone that's is created through fission of oxygen from the interaction of ultraviolet radiation in the tropics leads to compressional warming of the arctic stratosphere that causes to dramatic arctic blocking (-AO). I also have a hunch that perhaps this extended multi year la nina may have some connection as well to SSWEs by increasing surface OLR to the surface of the tropical pacific & global tropics as a whole which may lead to further ozone production that forces an increased piling up of air in the arctic, but that's speculation on my part. It's obvious that standing mountain waves & Convectively Coupled Kelvin Waves (CCKW) play a role in stratospheric warming events as I noted last year weeks in advance of that major stratospheric warming event.

I am all for a warmer stratosphere for a cooler than normal winter!