A Special Weather Advisory (SWA) has been issued for the following areas:
-West 2/3 Tennessee
-North Mississippi
-Some of North Arkansas
-Central Texas
-Central Oklahoma
At 8:09pm, these areas were under a FREEZE WATCH or FROST ADVISORY.
People in these areas should bring in extremely sensitive plants.
This will expireat 11:59pm, but may be extended at 4:20pm.
By Andrew at 8:06 PM No comments:

A Special Weather Warning (SWW) has been issued for the following areas:
-Southern 2/3 of Illinois
-Southeast Iowa
-Southcentral Iowa
-Missouri
-East Kansas
-East Oklahoma
-Northwest Arkansas
-Most of Kentucky
-South 2/3 of Indiana
-West Central Ohio
-Southwest Ohio
At 8:04pm, the above areas were under a FREEZE WARNING.
People in these areas should bring in sensitive plants. This will be the first hard freeze.
Sensitive plants will die.
This warning will expire tomorrow at 11:59am, but may be extended at around 4:00 when the next warnings, watches and advisories are issued.
By Andrew at 7:59 PM No comments: 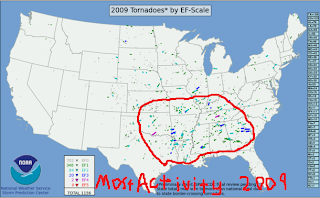 Update to today's SWW and *SWW* 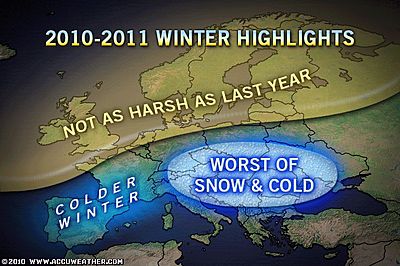 So, as we can see, much of Europe will get a well deserved break. Some of the areas up north were blasted last year over and over again. This year, the blasting stops...for you guys. For the Southern Europeans, the Worst of the winter will flush into the area, with Bitter cold and Heavy snow. yes, Snowday material. I predict potentially record breaking snowfalls in the center and north of the 'worst of winter' area.
So, what does Northern Europe get this year? I predict, based on this graphic, that North Europe will get a milder winter with not as much snow. I do anticipate some heavy snowstorms, but not as many as last year. Maybe even a few temperature swings. But nothing in the way of any superstorms. Again, the probability of a few snowstorms is high. But several like last year is looking more and more bleak.
Out in Western Europe is the colder areas. Not the worst cold, but still cold. Not anticipating the worst snow, but maybe a bit above average or just on average. I predict maybe a couple days where the records for temperature could be broken, emphasize COULD.
In conclusion, South Europe will get cold. Southeast Europe will get the harsh hand of winter, while the West part gets chilly. Up North, the entire area gets a break from the terrible winter from last year. Not as cold, and not as snowy.
Thanks for viewing the 2010-2011 Europe Winter Forecast. This will be the ONLY Europe forecast unless any major changes are made. Below is MY summary for this winter. 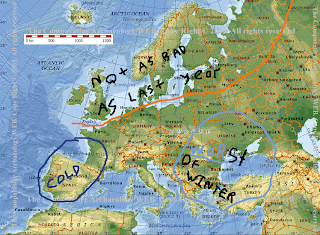 Email ThisBlogThis!Share to TwitterShare to FacebookShare to Pinterest
Related: 2010-2011 winter

(Updated November 2nd, 2010)
Hello all! Today we will be reviewing the Canadian winter this year. Thanks to Accuweather for providing information.

Let's focus in on the Southern portion of Canada. The populated regions, such as Toronto, are in store for above average snow. Other areas to the west will also recieve aboveaverage snow. In some areas, the above average will turn to heaviest snow range. I got a graphic from Accuweather.com for their look on the forecast. 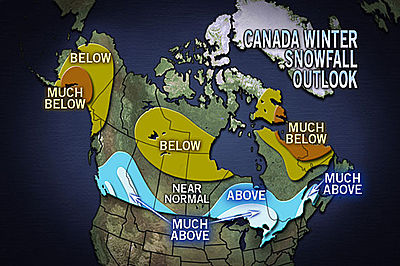 Accuweather is a reliable resource. However, I'm going to argue that the area lining the New York-Ohio area will also be in the Much Above range. As you can see, in the middle, there will be near normal conditions. Slightly below? Slightly above? Nope, just normal. Even the Northern US Plains is on track for a normal winter.
Also in the southern Canada regions we see some Below Normal snowfall. That is not something I'm going to argue with, particularly due to the fact there is nothing to argueabout against this.
In US Alaska, Much below normal snowfall. Sorry kids, notmany snowdays this year, if any.
Focusing now to Northern Canada, we'll start off with the... well, there's only one thing to say about it. The entire Northern Canada area will either be normal, below normal, or much below normal. The below normal areas reside off the East coast of Canada, as well as up north by Denmark. Or Greenland. Whichever you prefer. Below is MY snowfall map. 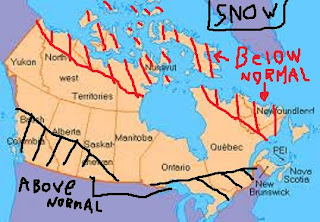 Temperatures
---------------
Let's start off with the most surprising fact: The same area in the Much Above snowfall is in the Above Normal temperatures! Why?? Because Canada is colder than the US. Don't worry, Northern US kids, my forecast will stay the same despite this. I am expecting temperature swings in Canada due to the Above Normal snowfall.
Turning to the East Coast, we see bits and pieces of above normal temperatures. No arguments there.
Up by Alaska, Much Below normal temperatures. And, seeing as how cold it can get, well, let's just say that frostbite'll be as common as the common cold. The areas surrounding Alaska bathed in Below Normal temperatures, likely caused by polar winds shifting to allow absolutely frigid air to sweep through.
Thanks for viewing the 2010-2011 Canada Winter Forecast. This will be the ONLY forecast for Canada unless there are major changes.
By Andrew at 4:21 PM No comments:

Email ThisBlogThis!Share to TwitterShare to FacebookShare to Pinterest
Related: 2010-2011 winter