Confidence has grown to a degree where I do believe we will see the first severe weather outbreak of the season. Title may have to be changed to reflect a tornado outbreak if model guidance remain sturdy with current forecasts.

The Storm Prediction Center in Norman, Oklahoma has issued a long range severe weather outlook for the looming severe weather outbreak that is likely to be the first outbreak to open the severe weather season. Discussion from the SPC indicates instability and favorable mid/upper air wind field will allow for the formation of severe weather across the western half of Kansas. Discussion goes on to say that model differences include the evolution of storms, and whether they will congeal into a cluster of severe storms or remain as individual supercells. End of discussion illustrates that additional areas will need to be outlined in the future if current forecast trends continue. Below, we will see what this storm involves. 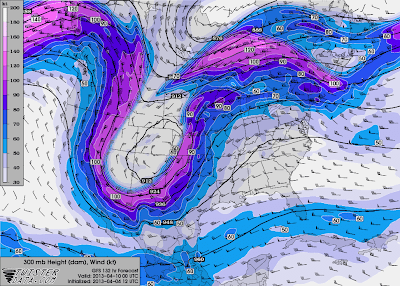 Strong storm system will eject from the Southwest into the Plains to provoke the biggest warm-up of the season for those in the Midwest and east. Above image (and all forthcoming images) is valid for the evening of April 9th. This particular graphic shows the projected jet stream forecast for the evening of the outbreak. We see the Pacific jet stream plummeting south to intercept the storm system, and in the process set up an upper-air wind field appropriate for a severe weather event. A few concerns ride along with this jet stream set-up. Main concern is the Pacific jet stream actually dropping the storm due to how far south the system is. Previous forecasts have shown this concern coming to light, with the jet stream preferring to ride into Canada rather than drop south into the southern Rockies. Second concern is the lack of the subtropical jet stream's presence. We can see it as a weak band of winds in Mexico and just hitting southern Florida. If the subtropical jet stream were to phase (merge) with the Pacific jet stream to intercept this storm, it is highly likely this event would be much more intense than what we are currently looking at. 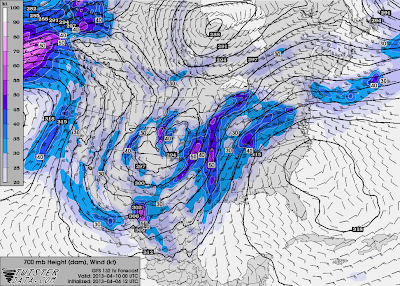 Lower level winds just 10,000 feet above the surface illustrate banding patterns of where we may find the strongest thunderstorms. Ribbons of winds above 50 knots are found in Arkansas into Iowa, as well as eastern Kansas and even trying to push into western Missouri. These enhanced lower level winds will allow thunderstorm development to gain more support as far as potential for severe weather goes. In this format of lower level winds, the presence of tornadoes and other forms of severe weather would most likely increase as the night wears on. Current concern area aligns with the lower level wind ribbons, and I expect the overnight hours of April 9th into April 10th to be favorable for severe weather, now in both the upper and lower wind fields. 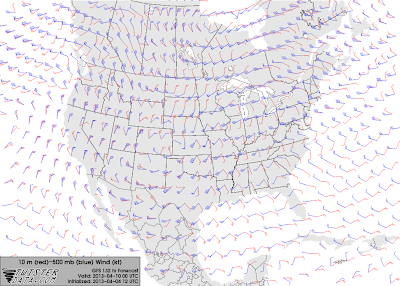 Crossover image of winds 10 meters above ground (red wind barbs) and winds at the 500 millibar level (blue wind barbs) shows a new side that makes me more suspicious that this outbreak will be pretty tornado-oriented. If we examine the southern Plains states of Missouri, Arkansas, Oklahoma and Kansas, we find that the wind barbs are generally at anywhere from a 45 degree to 90 degree tilt away from each other. This separation means the wind direction varies between these levels, one of the two components of wind shear. The second component, difference in wind speed from one level/barb color to another, is more easily found in the aforementioned states. Largest change is in Kansas, where we see a blue triangle, two long lines and one short line on a barb (triangle= 50 knots, long line= 10 knots, short line = 5 knots) to make 75 knots against a very weak red barb (15 knots total). Still-substantial speed changes are found in Arkansas, Oklahoma and Kansas, where differences in speeds are at least 40 knots in many places. It is these direction and speed differences that tell me there is certainly a tornado threat lurking in the shadows. 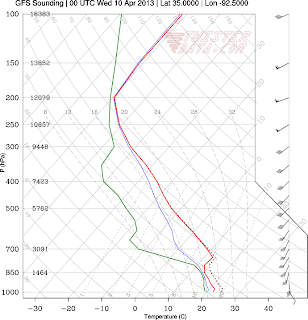 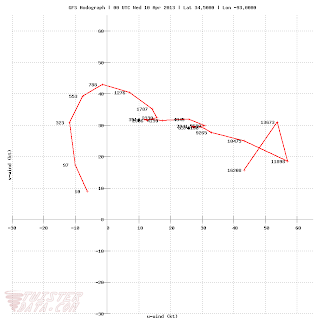 Both of the above graphs are from central Arkansas. The top image is called a sounding, and the bottom image is called a hodograph. On the sounding, we can identify a few things that focus in on the idea of a severe weather event. First and foremost, we look to the bottom of the sounding itself and to the gap between the solid red line and dashed red line. This gap between the two lines is instability that fuels thunderstorm development. The larger the gap between these two lines, the more instability is available. In this forecast sounding, we find a pretty large gap between the two, and model forecasts confirm there will be adequate instability for a severe weather event in this part of the nation. On the right side of the sounding image, we see a bunch of wind barbs, from the surface to the far reaches of the troposphere. Recalling our wind speed and wind direction rules for wind shear, the right side of the sounding with those wind barbs is where we look for identifying areas with the highest wind shear. If we examine the wind barbs from the surface to roughly 700 millibars, we see that the direction certainly changes from the surface to 10000 feet above ground, but it is the speed change that is most startling. We see at least a 30 knot wind change from the surface to just a couple thousand feet above ground- that's some serious lower level wind shear!

As far as the hodograph, the projected wind pattern is shown as if the weather balloon was sent up into the atmosphere, and its location was recorded at a certain interval. When you see a wide stretch between one black dot and another on the hodograph, that signifies strong winds. When you start seeing circling patterns, whether they are full circles or just semi-circles, that is a very positive sign for tornado development. The circling pattern means the winds are spinning as you move up the atmosphere. If you imagine how a traditional corkscrew looks with the metal helix, that is essentially what the wind pattern in the atmosphere is doing, and it is this pattern that is most conducive for tornado development. This particular hodograph, valid the evening of April 9th in Arkansas, shows multiple circling patterns as you go up the atmosphere, meaning the chance for tornadoes in that area is on the rise! 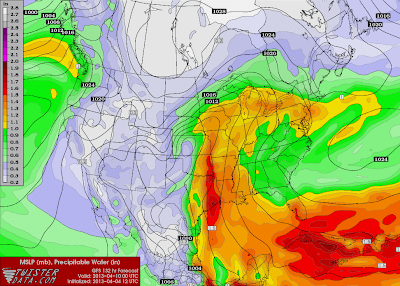 Lastly, we go down to the surface and look at projected precipitable water (PW) values for the evening of April 9th. The storm system is clearly shown in central Kansas as the higher PW values wrap around the central part of the state. Further down to the south, precipitable water values surpassing 1.5 inches are found in eastern Oklahoma and eastern Texas. These high and humid values can only be obtained from one place- the Gulf of Mexico. It looks like the Gulf will be open for business for this event, enabling this storm system to gain tremendous amounts of moisture. As we know, moisture is one of the necessary ingredients for severe weather in general. In this case, it really is the more the merrier. 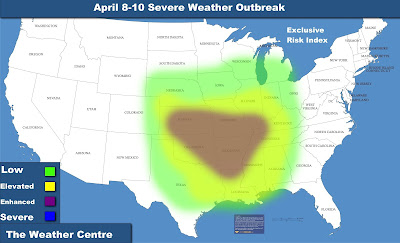 Exclusive Risk Index (ERI) is pinpointing a 'Low' risk of severe weather for the Upper Midwest, just east of the Front Range in Colorado, and down to southern Texas. 'Elevated' risk of severe weather exists from Kansas and Nebraska eastward into central Illinois and Kentucky. The risk area continues down into the Gulf Coast and stays along the coast to encompass a large portion of the Plains, Midwest and Gulf Coast in the potential area for Elevated severe weather. A fairly large area of 'Enhanced' severe weather goes from Kansas, which appears to be the starting point for this multi-day outbreak, south and east into much of Oklahoma, Missouri, Arkansas, and portions of LA/MS/TN/KY/IL. Exact severity of this outbreak is to be determined, but the option to upgrade this event's title to a Tornado Outbreak remains on the table.