What Are The Models Saying This Winter? - CMC1 Model 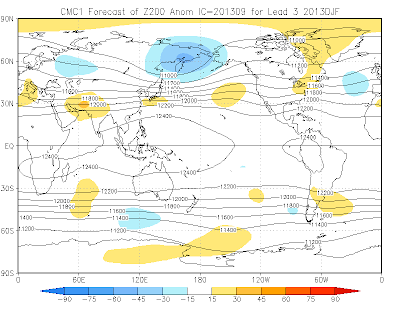 This model examination will focus on the long range CMC1 model.

The image above shows predicted 200 millibar contour lines and anomalies. We're going to focus on the contour lines for right now. We start in East Asia. Looking closely at the image, we see tightened contour lines in the area around Japan. Considering there is a 6-10 day gap between storm systems in the East Asian area and storm systems in the East US, a tightening of contour lines could suggest an increased number of storm systems. This, in turn, may suggest a stormy East US this winter. We see a large ridging pattern across the Alaska/western Canada. This ridging could then provoke a colder than normal pattern to evolve across the Midwest and East US, as cold air flows southeast along the ridge. If the ridge extends far enough into Alaska, a cross-polar flow situation could set up, which would transport Siberian air to the States. A cross-polar flow is one of the situations that brings the coldest air possible to the US- another situation would be the cold air displaced to the surface as a result of a stratospheric warming. Enhancing the probability of a stormy Midwest and East Coast is the presence of lower than normal heights offshore of the Southwest. This suggests a stormy subtropical jet stream, which could lead to some snowy events for portions of the Central and East US. 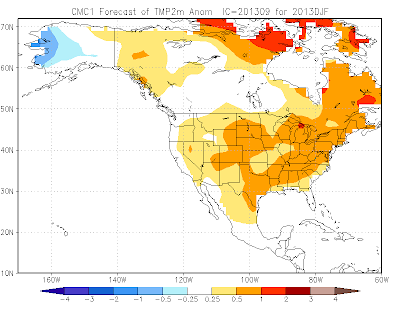 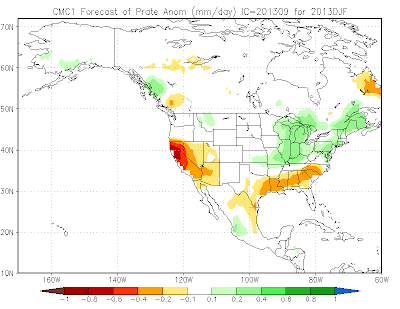 Precipitation anomalies suggest a very wet Midwest and Northeast for this winter, with a dry Southeast. Considering the prospect of a Southeast Ridge, storms would tend to be directed north into the Midwest and Great Lakes. I would not be too surprised to see the precipitation pattern along the eastern half of the nation verify- it is in line with my current thinking for this winter. As far as the West, I would expect to see dry precipitation anomalies further to the north due to the idea of some ridging closer to the Pacific Northwest and western Canada. But this is only one model's take, and we are still months away from winter.

Email ThisBlogThis!Share to TwitterShare to FacebookShare to Pinterest
Related: What Are The Models Saying This Winter?
Newer Posts Older Posts Home
Subscribe to: Posts (Atom)