Up to 3 Feet of Snow Possible in New York 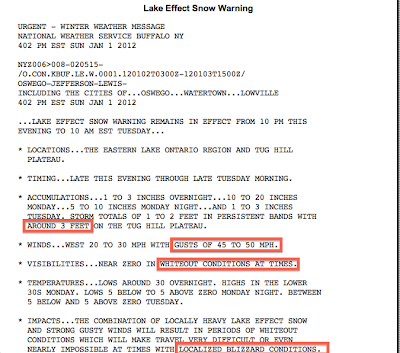 Up to 3 feet of snow is possible in the next couple days in western New York as per the National Weather Service. Below we have the warnings and watches in effect around the Great Lakes.

The 12z ECMWF is showing a scenario in which a cutoff low develops in the Southwest, travels through Texas, and moves east-northeast from there, which could make for a snowstorm in the Plains, Midwest and Ohio Valley.
At hour 192, we are seeing the cutoff low in the Four Corners region as shown in the 500mb geopotential height maps. At this point, there's not much to look for, other than seeing a squished east US with a ridge in the southern region of North America and a disturbance somewhere in the Northeast or farther north.
At hour 216, we are seeing the system strengthening as per deepening geopotential heights on the map above. We are still seeing a ridge signature in the Southeast, which could play a crucial role in potentially moving the storm system to the north, which would in turn affect the Midwest, Ohio Valley and Plains.
At hour 240, the ridge in the Southeast is still present, which should bump the system north, but because the system is so strong, the supposed bump would be small as the system would be trying to barrel through the ridge. If this were to turn out, states such as Kansas, Nebraska, Iowa, Missouri, Illinois could be affected with some snow if temperatures are below freezing. Because this is the maximum timeframe that is shown for the ECMWF, we cannot show you any more. We will continue updating you on this system as it develops.
By Andrew at 2:12 PM 17 comments: Links to this post

Happy New Year to the Central US!