Where could this potential tropical system go next week?

We have devised a rough sketch of what this potential tropical system could do next week, track-wise. We believe one solution is for the system to make landfall somewhere between Georgia and Virginia and move inland, or the system to ride the coast the entire way. Either solution puts out some pretty hefty rainfall total potentials for the East Coast/Florida, as seen in this post.
By Andrew at 8:06 PM No comments: Links to this post

Some very heavy rainfall is forecast over two areas of the country- Plains and the Southeast. Let's examine those areas.

1: Southeast
The Southeast will be more of a tropical issue as a low pressure system is projected to become a tropical system and could affect Florida, the Gulf coast, and the East Coast. This system, while trending on the east side of Florida, still has a chance (albeit decreasing) of affecting the Gulf Coast rather than the East Coast.

2: Plains
The Plains are just going to be in an unfortunate situation where it will rain for quite a while over the same places. These things just happen sometimes, but we can expect a potential for flooding along with this heavy rain.
By Andrew at 7:48 PM No comments: Links to this post

We are unable to post an explanation at this time due to unforeseen issues. We will try our best to get something out there soon.
By Andrew at 6:05 PM 19 comments: Links to this post

Those in Chicago better get ready for this winter...

Email ThisBlogThis!Share to TwitterShare to FacebookShare to Pinterest
Rainfall forecast for next 5 days indicates possible tropical system-level rainfall to east of Florida http://www.hpc.ncep.noaa.gov/qpf/p120i12.gif
By Andrew at 10:59 AM No comments: Links to this post 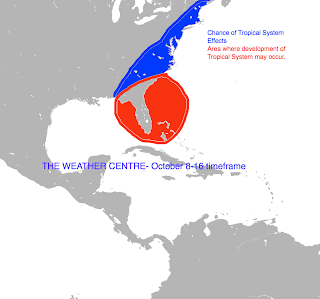 The Weather Centre has outlined the area where main development is expected from this system (this circle may be extended southward), as well as the areas along the East Coast where effects from this tropical system may be felt.  Additionally, the 6z GFS shows a weak tropical system making landfall on Georgia in a similar move to last night's 18z run. 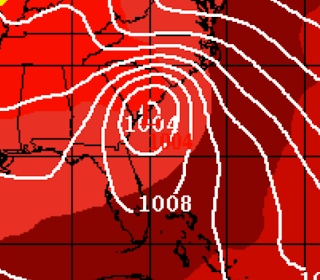 By Andrew at 7:09 AM No comments: Links to this post