It appears that the GFS Ensembles and ECMWF ensembles are in very good agreement on the potential November 27-29 winter storm (see full post here).

This is the forecasted situation for the morning of November 28th, showing 12 hour precipitation, isobars, high and low pressure areas, and the blue rain/snow line superimposed on all of it. The storm system we are watching is forecasted to be in the eastern Great Lakes at this point, and if we follow the 12 hour observed precipitation, it seems possible that snow could actually fall in the Plains, Midwest and Ohio Valley into New England. The heaviest snow would likely be in the Midwest and south central Plains (KS/NE).

The ECMWF ensembles are showing the exact same location and exact same strength as the GFS Ensembles- remarkable for a situation more than 7 days away. This image is valid for the same time as the GFS ensembles, which is November 28th in the morning. However, this time the ECMWF Ensembles show the 850mb temperatures, which are still following the GFS Ensembles. Imagine the line between the light blue and light green is the equivalent of the blue rain/snow line on the GFS Ensembles, and you can see how remarkably similar these two ensemble systems are.

I will connect all of this in a super-post on this potential tomorrow.

I said I would begin the new segment 'Teleconnection Talk' a while ago, but it is only now that I feel the time is right to debut this segment. 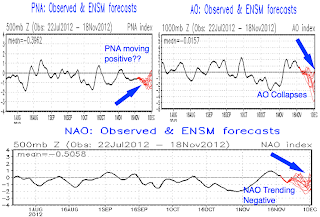 It appears that the three big indices tracked for effects on North America could be shifting in the next two weeks, possibly pointing to a pattern more favorable for cold, stormy weather by the start of December.

On the top left is the PNA forecast. The PNA, or Pacific North American index, tracks height anomalies in the Northeast Pacific. If that region has a high pressure system over it, the PNA is positive, and cold weather is known to invade much of the Lower 48. The storm track shifts north and hits the Midwest, Great Lakes and Ohio Valley as well. In a negative PNA, a low pressure system is sitting over the same area, bringing warm weather to the East US, but cool weather to the West US. The ensemble members from the Climate Prediction Center (CPC) show that the PNA could be trying to push positive. While there is a major spread (difference) in the forecast members on December 1st, this is an encouraging sign that the ensemble members are at least considering a change in the PNA.

Finally, on the bottom half of the image we find the NAO (North Atlantic Oscillation) forecast. In a positive NAO, there is a stormy pattern over Greenland, leading to a warm East US and stormy, cool West US. A negative NAO brings cold and stormy weather to the East US, while delivering warm, dry weather to the central/west US. The CPC's ensembles are pretty spread out as time goes on, but there appears to be a general trend for a gradual weakening of the positive NAO and possibly slipping into weak negative NAO territory. If the lowest ensemble forecast members verify, the NAO is very negative. If the most-positive ensemble members verify, the NAO will stand at a weak positive phase. However, because most of the ensemble members are negative, I prefer to side with the negative solution.

Exciting things are happening, folks, and it looks like the trend for the end of November and into early December is looking cooler and stormier. Just how cool and stormy is yet to be seen, but things are looking relatively good at the moment.

Andrew
By Andrew at 6:41 PM No comments: 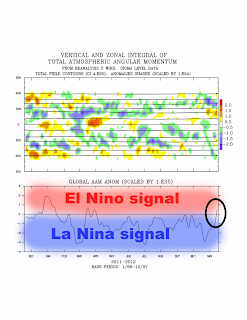 Multiple indices are beginning to show a transition into El Nino signal territory, where the index in question shows that conditions similar to that of an El Nino are being seen. Above is the Global Atmospheric Angular Momentum, or GLAAM (also called AAM). If we look at past GLAAM values, we see that they have been staying in La Nina territory for a while now. However, I circled a new bounce in the GLAAM that has pushed the index into El Nino territory. Could this be a sign that the atmosphere is recognizing the El Nino? I wouldn't doubt it. 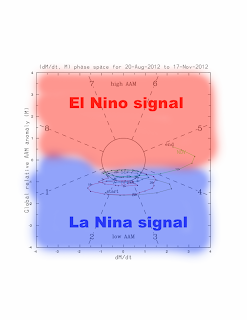 This second image is of the Global Wind Oscillation, or GWO. It is closely tied into the GLAAM, but pretty technical, so I'll just explain what it all means. Basically, the bottom half of the image (Phases 1-4) are defining a La Nina, and the top half of the image (Phases 5-8) are defining an El Nino. The middle circle, while colored, defines the GWO is too weak to affect the weather. Recently, the GWO has been staying in Phases 1-3, meaning weak La Nina conditions. However, if you follow the bright green line on the right half of the image, you will see the most recently observed conditions have been floating into Phase 4, going into an El Nino phase.

It appears that at least some of the atmosphere is starting to recognize the presence of an El Nino. While this is one of dozens of factors linked to seeing the El nino appear in the atmosphere, this is definitely a first step.

There is potential for a winter storm between November 27-29 for much of the northern and eastern parts of the nation. Let's take a look.

This is the GFS forecast for the evening of November 29th. On this chart is 6 hour accumulated precipitation, as well as the rain/snow line (blue), and low and high pressure systems superimposed. Basically, this is the whole deal. On the evening of the 27th, the GFS model is projecting our big storm system to be in a pretty messy place. I'm not sure if I can pinpoint just where this system actually is on this picture. Precipitation looks to be ongoing across wide swaths of the nation, including the North Plains, the Rockies and the Midwest into the western Great Lakes. The blue rain/snow line is to the south of a heavy area of precipitation across the Dakotas, Minnesota and other states to the west, meaning that residents in those areas could see snow if this forecast verified. That would be a good 2-5 inches of snow in just 6 hours.

Fast forward 12 hours and we are on the morning of November 28th. At this point, our storm system has moved far off to the northeast and is now in southeastern Canada at a minimum pressure of 998 millibars. Precipitation is ending across Wisconsin and Michigan as snow, with Nebraska and Kansas also getting some snowflakes as the cold air fills in behind the system. The blue rain/snow line remains north of many locations in the Ohio Valley, meaning this would be a rain event for them. At this point, Canada is now getting the snow and the New England area is getting in on some heavy rains.

This is the ECMWF's forecast for the morning of November 27th. The European model is portraying a large area of low pressure across the Plains and southwestern Midwest, indicating that our storm system is beginning a move to the northeast. If I were to estimate where the precipitation would be falling, I would say Iowa, Nebraska and Kansas would be getting in on some precipitation (likely snow in the latter two states).

The image above is 850mb temperatures for the same time. See how the cold air is wrapping behind the system as it moves to the northeast? That is how storm systems operate. I find the GFS solution of not pulling in cold air pretty sketchy. It's possible, but in these circumstances, I find it unlikely. As stated above, if precipitation is ongoing in Nebraska and Kansas, it would likely be snow. The ECMWF confirms this suspicion, showing as low as negative 15 degrees Celsius only 5000 feet off the ground.

On the morning of November 28th, 24 hours later, we see a very strong low pressure system placed in the western Great Lakes. The bottom right corner of this chart tells me that it is as low as 983 millibars- very strong for a system on-land. The tendency for isobars to be so close in the above image tells me that any precipitation of any kind in Wisconsin, Illinois, Michigan, Indiana, Ohio or Indiana would be wind-driven. Let's look below to see what type of precipitation would fall where.

850mb temperatures for the morning of November 28th are showing a deep wrapping of the cold air into the heart of the system. Like I was saying, it's only natural for storm systems to pull in cold air behind themselves. The GFS does not have the correct forecast. If I were to say there is precipitation ongoing in this timeframe, I would say it would be in Wisconsin, Minnesota, Michigan and Ohio into Indiana. The first 2 states would likely be snow, while the last 3 states would be iffy, especially Michigan.


(Originally posted November 18) I know what you're thinking: "Why should I get excited over a forecast over 10 days away? It'll never happen- the model is too far out!" But there is substantial evidence that this isn't just another 'fantasy forecast' (a forecast that looks great but doesn't happen). 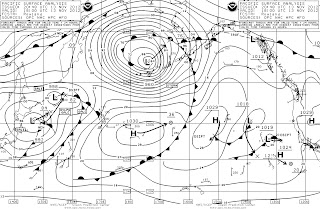 This was the observed surface map for November 13th, just 5 days ago. This surface map is for the northern Pacific and Bering Strait. As you can see, there is a very strong storm system swirling around in the waters just off the end of the Aleutian Islands on this date.

...between November 30 and December 4. It just so happens that the storm system forecasted above falls near this timeframe.

Is this a coincidence? I doubt it. While the GFS may be over-exaggerating some aspects of the storm (i.e. strength, precipitation, air temperature), I have a feeling that the GFS is catching on to this Bering Sea Rule, as it's called.

I can't say I am willing to pinpoint the exact track and effects of this storm system because the models are all over the place. One cannot figure all those factors out just by seeing a strong GOA system, either- all you can determine is that a strong storm system will be around the Lower 48 roughly 17-21 days later.