**This post is dedicated to Josephine Gay, age 7, a victim of the Connecticut shootings.** 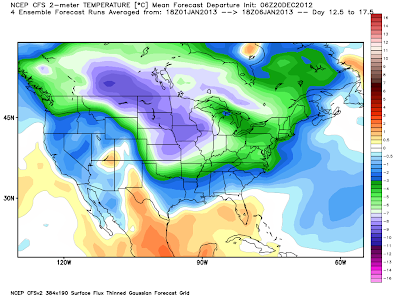 The CFS v2 weeklies from WeatherBell are suggesting that January will open on a very chilly note, with temperature anomalies lower than 7 degrees below normal likely.

The CFS v2 has been showing a cold open to January for quite some time, so it's not surprising to see the forecast still standing today. The ECMWF is projecting widespread warming across North America in the stratosphere in 10 days, enhancing the probability that cold weather will push down to the surface in the next couple weeks, as exhibited by the ECMWF forecast below:

Andrew
By Andrew at 6:16 PM No comments: Links to this post

**This post is dedicated to Josephine Gay, age 7, a victim of the Connecticut shootings.**

We'll start with the GFS model. This forecast is for the morning of December 26th. We can see our storm system in the Southeast, with a pressure at or just below the 1000 millibar mark. There is a strong high pressure system in the Plains keeping the system from wanting to move north and towards the Midwest, so it would seem the only logical solution is to have the system move towards the East Coast.

Moving ahead to the morning of December 27th, we see that the system has bombed out and is moving up the East Coast with a minimum pressure of 988 millibars. The proximity to land suggests much of the Northeast and Mid-Atlantic would be severely affected by this solution, should it happen. We still see our high pressure system in the Plains, keeping the system away from the Central US.

We now move on to the ECMWF model, forecast for the same timeframe of December 26th in the morning. Once again, we see the storm system in the Southeast and a strong high pressure in the Plains in an act known as suppression, where the storm is forced south and thus suppressed from moving north. This is a typical negative NAO pattern, something I will address below.

Moving to the morning of December 27th, the reliable ECMWF model brings the system inland into New York, with a minimum pressure just below 980 millibars. This strength difference does prove key, and will prove key in future forecasts. We still see a high pressure system in the Midwest and Plains, but not as strong as the GFS for this same timeframe.

Here's the issue I see with the forecasts the ECMWF and GFS are putting out. They both suppress the storm to a massive degree and then take it up the East Coast in a strikingly textbook negative NAO pattern. But looking at the teleconnection forecasts for the NAO, we actually see a neutral NAO. Such a neutral NAO would not push the storm up the coast, but rather could push the storm out to sea without going up the coast.

The Pacific North American index (PNA) forecast from the 12z models shows a spread in the forecasts during the time period this forecast is valid for. The GFS/GFS Ensembles take a positive PNA, while the ECMWF goes negative PNA. The ECMWF Ensembles are indifferent to either phase. If such a positive PNA evolves, you are not going to see the storm be suppressed south and then go up the East Coast. A positive PNA induces conditions that prefer a storm track in the Ohio Valley and Midwest, like previous ECMWF runs were showing.

If the PNA were negative like the ECMWF is showing, high pressure would build in over the Southeast and provoke a storm track more tailored to the Plains, like we saw earlier in the month. The ECMWF is not handling its teleconnections correctly. A neutral NAO and negative PNA would not suppress the storm south and bring it up the coast, unless this is an anomaly situation, which it should not be.

My feeling is the models are having troubles. I have found that the timeframe between Hour 120-Hour 204 is the most turbulent time in model forecasts. The system remains out in the Pacific, meaning weather balloon data is unable to sample it, and the model forecasts are thus hindered in their accuracy.

If anything, such a strong storm in the East would try to provoke a ridge in the Rockies, possibly then inciting a slight positive PNA as the GFS is suggesting. I won't believe that big suppression forecast unless I see it.