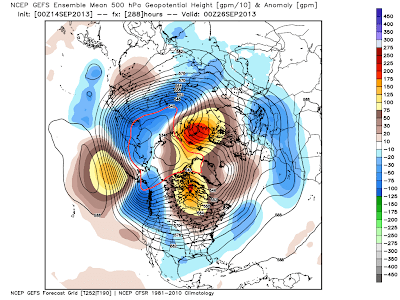 The recent warm weather that many across the nation have experienced has ended for the next several days, as a new Omega Block pattern begins to set up over the northern part of the nation.

Shown above is the long range projection of 500 millibar height anomalies across the Northern Hemisphere from the American GFS Ensembles. This is valid around the September 26th period. On this forecast map, we see deep troughing along the western coast of Canada and into the Pacific Northwest. This provokes high pressure to develop in the Central US in a situation that would typically bring hot weather back to the nation. However, the body of high pressure will be displaced further north into Canada, which will spare much of the north central US from getting in on another hot spell. As long as the stormy pattern along the western North America coast continues, the threat of warmer weather easing into the US again is not out of the realm of possibility. I do not believe that the US will end up warmer than average in the next week or two due to this high pressure being displaced north, and those who sweated out several 90+ degree days in the last week will catch a well-deserved break. 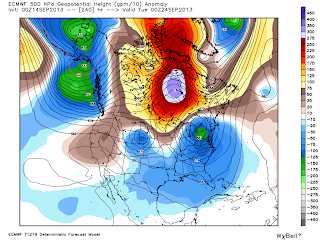