There is the potential for an "Apps Runner" or Nor'easter winter storm around January 24-28, as a storm begins to traverse the Bering Sea in a favorable position. 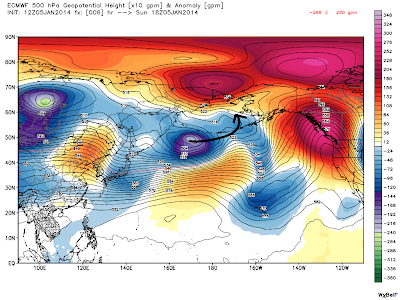 This is the ECMWF 500 millibar anomaly forecast for the afternoon of January 5th, the day this post was published. You can see the deep negative geopotential height anomalies over the southwestern portion of the Bering Sea, and I drew a line outlining a rough track of where this storm system is projected to go in the next few days. Around January 6, the storm begins to cut north across the central/eastern Aleutian Islands, and then turns a little northwest to swirl in the Bering Sea. This is a telltale sign that we may be in for an Apps Runner or Nor'easter winter storm, as Joe Renken's Bering Sea Rule describes.

The storm in the Bering Sea skirts in the southern portion of the waters across the January 5-6 time period, before cutting north on the January 6-7 time period. If we extrapolate that time frame 17-21 days out to use the Bering Sea Rule, we end up with roughly a January 24-28 period that we should watch for a potential winter storm. The reason I am labeling it as a possible Apps Runner or Nor'easter is because of how far east it cuts north. Joe Renken indicates that the further west storms cut north in the Bering Sea, the further west they end up 17-21 days later in the United States. In this case, our storm system here cuts far enough east that an Apps Runner or Nor'easter scenario does seem viable. The Bering Sea system is also displaying traditional characteristics of a Nor'easter scenario, where the storm moves in the southern waters of the Sea before cutting north quickly. A Nor'easter forms in a similar fashion, where the energy traverses the Southern US before shooting north along the East Coast.

To sum up:
There is potential for a winter storm over the January 24-28 time period, and indications are it could affect the Ohio Valley via an Apps Runner, or the Eastern Seaboard by way of a Nor'easter storm system.

This is an update to the previous January 17-21 Potential Colorado Low/Panhandle Low Winter Storm post. Everything remains intact with this storm, and now the GFS is biting.

The following is copied from my December 27 post on this storm.

This image above from the Weather Prediction Center (WPC) shows the mid-level pattern over Alaska on January 1st. There are two systems marked on here; one storm system is over Alaska, as the dip in the height contours shows, and another storm is marked by the red 'L' just offshore of far eastern Russia. We're going to be watching the red 'L' for this storm system. Model guidance sees this storm cutting north over the western Bering Sea, and this is where we employ Joe Renken's Bering Sea Rule. The Bering Sea Rule states that when a storm moves through the Bering Sea, a storm system then moves through a portion of the United States 17 to 21 days later. If we see this system cutting north in the western Bering Sea around the December 31 - January 1 timeframe, we can then predict a storm system to cut north in the US as well 17-21 days later, which brings us to the January 16-22 time period. Because the storm is projected to cut north in the western Bering Sea, Joe Renken does believe that this signals a Great Lakes Cutter system around the 20th of January. Other subjects I will discuss below lend additional credibility to this timeframe laid out, as well as the predicted track of the storm.The following MJO OLR portion is copied from my previous December 23 post on this storm, because the information remains valid. 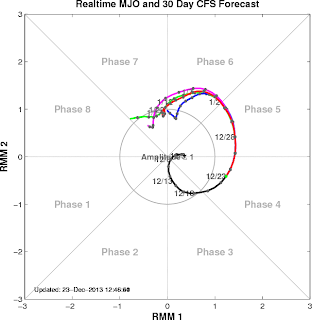 The Bering Sea Rule isn't the only long range piece of guidance we can use to detect a potential storm. Here, in a CFS four-member ensemble forecasts developed by Kyle MacRitchie, we see the long range projection of the Madden-Julian Oscillation, in its eight-phase phase space diagram. Using this graph, we see that the MJO is projected to enter Phase 5 around December 27th, which all ensemble members agree on. Now, we'll take a look at the Outgoing Longwave Radiation (OLR) composites in the mid-latitudes for a Phase 5 MJO. 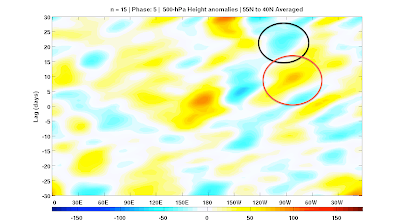 This MJO composite, developed by Nicholas Schiraldi, shows OLR anomalies in the 30 day period before and the 30 day period after the MJO hits Phase 5. In this case, negative lag days on the left side of the image show the number of days before the MJO gets to Phase 5 territory, while positive lag days on the left legend depict the number of days after the MJO hits Phase 5. We can substitute the lag day of 0 for December 27th, as that is when the CFS forecast above predicts we will get into that Phase 5 MJO. Looking ahead, we will ignore the red circled portion (that is for an upcoming post) and will instead take a look at the black circled part of the graph, where you can see blues shaded in. A look at the longitudes at the bottom of the image tells us the strongest negative OLR anomalies will be centered between the 85 West and 100 West longitude lines. If we put that together with the indication that this OLR anomaly chart is valid for latitudes between 55N and 40N, we find that the latitude lines cover the entire United States from Canada to Mexico, while the 85W and 100W longitude lines cover the US from roughly the Central Plains to the Great Lakes. If we clarify that negative OLR anomalies mean stormy weather, and observe that the circled blues are moving north and east, we can deduce that a Phase 5 MJO results in a storm system crossing the US across the Plains, Midwest and Great Lakes in roughly a northeast (or even east-northeast) direction. If we glance at the lag days on the left for when this storm would occur, we find that the circled blues encompass lag days of +17 to +25, meaning the storm would hit anywhere in a 17 to 25 day timeframe after the MJO hits Phase 5. 17 to 25 days after the projected December 27th arrival of the MJO at Phase 5 puts this potential storm system in the January 15-23 period. Now, in order to cut down on the large timeframe, I decided to shorten the positive lag days to cover the strongest negative anomalies only, which gave me a projected storm timeframe of January 18-21.

How do we know the track of this storm?

Well, we've already deduced from the OLR charts that the longitude and latitude markings would strongly suggest a Plains/Midwest/Great Lakes storm system, moving northeast as it crosses those regions. With that in mind, I took a look at a device created by Larry Cosgrove and found two plausible storm tracks.
The first track possible is a Panhandle Hook (A) system. We can see that this system fits the bill that was outlined by the OLR charts. It originates in the Plains and move northeast through the Midwest and Great Lakes. These systems tend to bring heavy wintry precipitation to the Midwest, Great Lakes and upper Plains, and, if all goes right, these systems can attain massive amounts of moisture from the Gulf of Mexico to enhance these wintry precipitation prospects.
The second track that also fits the bill is a Colorado Low (A). The system originates in the Plains and then moves northeast across the Midwest and Great Lakes before progressing into Canada. The MJO OLR charts confirm that this storm is also a possibility, and the last time I used the MJO OLR charts to make a long term prediction, the results were spectacular. Because this potential event is still about a month away, we don't know how the teleconnections will react to possibly force this storm in a different direction than what the MJO OLR composites predict will happen. (End copied portion from Dec 27 post)

The latest 18z GFS has actually caught onto a storm in this timeframe, with the above image showing a storm valid on January 18th. I can guarantee you that this forecast will change, but it is interesting that we have seen the GFS bite on this idea of a storm system.

I expect we will see additional solutions with a storm around the 20th come about, just because of all of the factors supporting a storm in this timeframe. There are model solutions about a storm system just a few days before this projected storm system, and while they would technically fit into the MJO OLR Composite idea of stormy weather in and around the January 17-21 time period, I still believe the timeframe currently set forth will come to fruition.