There remains a formidable severe weather risk for the Upper Midwest on Sunday, including much of Minnesota into northwest Wisconsin.

This severe weather will come as a strong low pressure system lifts into Canada. Extended down south will be a cold front, which will sweep into the region, promoting strong storm cells. It is likely that these storms will start out individualized, which could very well promote supercellular structures. However, there will be less instability available to this round of storms. There will also be a capping inversion that will have to be broken over the course of the morning and afternoon if any storms want to form. That said, these storms have the potential to be less intense than the ones forecast for Saturday, which you can read about by clicking here.

An El Nino Watch has been issued by the National Oceanic and Atmospheric Administration (NOAA), specifically the Climate Prediction Center (CPC), as El Nino conditions are expected to develop in the second half of 2012.

You can Click Here for the full CPC discussion on the watch.

Let's take a look at the Scripps/MPI Hybrid ENSO Model to see what it shows.

The Scripps/MPI hybrid shows strong warming in the eastern portion of the ENSO monitoring area, with below normal temperatures being pushed to the west. Into the September-November timeframe, more warming will occur, likely bringing a start to an El Nino that should persist into much of 2013. Through the winter months, the warming looks to expand west still, and the same story stands for March-May 2013. 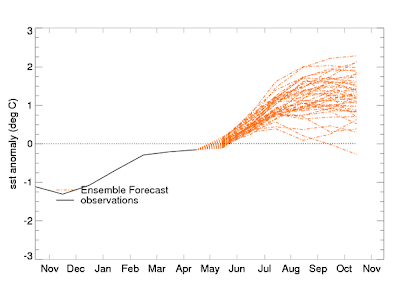 Ensemble forecasts from what appears to be the UKMET ENSO model show a clear El Nino developing by August, with further strengthening continuing through November. From the spread of the ensembles into November, it does appear that there is low confidence in that month, but I can make out a scenario where the ensembles keep it at this strength through the early 2013 months before weakening the El Nino into spring.

Remember- you can find 120+ weather models at our Weather Models page, including ocean, ENSO and general models.

There is a slight risk of severe weather for a portion of the Northern Plains, including North Dakota and northwest Minnesota, for Saturday. This is the beginning of the multi-day severe threat that I have been talking about for the past several days.

Discussion
Start of the day will have a very capped atmosphere that will persist through noontime and begin to degrade into the early afternoon. Thunderstorms are expected to break the cap in the mid afternoon, as instability rapidly increases and quickly breaks down the capping inversion. As soon as this cap breaks, towering updrafts - potentially violent - will erupt across North Dakota. Supercell structures are expected to rapidly form and begin to work over the area shaded in red above.

Considering that this area has been outlined in the long range outlook for a few days now, I find it very much within the realm of possibility that this slight risk will turn into a moderate risk at some point. 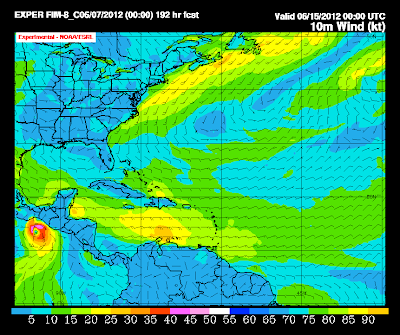 The FIM model is projecting that a tropical system will form just off Central America in the Eastern Pacific in the Late May timeframe. This system looks to have winds surpassing 40 knots, which would make this system Tropical Storm Carlotta.

The timeframe is still over 5 days away, and while the FIM does have a 65% verification score over a 7 day period (matching up to the GFS' 66% verification score), I don't have the confidence to assure you that this will happen. Does it have a chance? Yes.
By Andrew at 6:38 AM No comments: