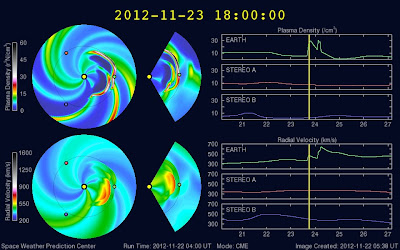 This is a model forecast of the sun and can predict solar flares and coronal mass ejections (CME). The top image shows the sun in the middle, and the Earth is the green circle in all 4 images. The two bowing structures in the top two images are the forecasted CME's, and they appear to be predicted to strike the Earth tomorrow, November 23 around 12:00 PM CT.

Because there will be TWO CME events, the effects could be more severe than just one CME. We could see radio and communications troubles, especially near polar regions and in some aircraft. Power outages could be seen in polar regions.

During the day tomorrow, keep abreast of the latest developments. You could even see the Aurora borealis if you live in certain areas! More details tomorrow. 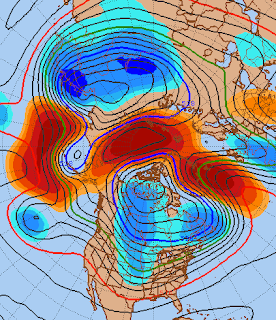 This forecast for East Asia has two strong storm systems located over the region, with one of these troughs placed on the coastal region of East Asia. When you get storm systems near East Asia, there is a 6-10 day gap between what happens in East Asia and what then happens on the East Coast of the US.

This stormy pattern over East Asia looks like it will be very persistent, which tells me that there will be a stormy pattern over the East Coast about 6-10 days later, which puts us at the December 4 - December 8 timeframe. This will likely not be a train of storms, more-so a storm system that develops either near or offshore of the East Coast and stays in place for a prolonged period of time.

The GFS model did show this system developing well offshore, so that is a possible solution.

Andrew
By Andrew at 9:29 AM No comments: Links to this post

Please note that yesterday's first call is now void, as I realized the data I was watching is incorrect. This post now includes my best thoughts on the situation. 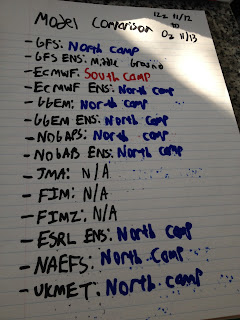 Rather than clog up this post with a ton of images, here's my own manual analysis of the models as of the most recent 0z run. As you can see, the GFS, ECMWF ENS, GGEM, GGEM ENS, NOGAPS, NOGAPS ENS, ESRL ENS, NAEFS ENS, UKMET models and ensembles are all in agreement of a North Camp solution, where the storm system goes north and impacts the Midwest, Ohio Valley and eventually New England. The GFS ENS appear to be in the 'Middle Ground' in between the North Camp and South Camp (The South Camp goes through the South and goes up the East Coast), while the JMA, FIM and FIMZ models are unavailable for the time of analysis. 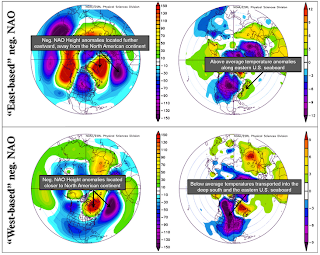 Models are supporting the idea of an east-based negative NAO, which is why the heavy majority of models and ensembles are in favor of this North Track.

What the models are really having trouble diagnosing is the strength of this storm system against a ridge of high pressure which will be in place over the Southeast. If the low pressure system is weaker, the ridge will deflect it north. However, the ECMWF believes that the system itself is stronger, and that the Northeast is destined for this storm. While it has happened before where the ECMWF has been the only one to correctly predict such a scenario, nearly all of the ensembles (including the NAEFS and ESRL PSD) are going for the North track.

At the moment, I now favor the North Camp, not only thanks to the models, but as I described with the east-based negative NAO and ridge in the Southeast.
By Andrew at 9:11 AM No comments: Links to this post

The Pacific Decadal Oscillation, or PDO, is showing signs of changing its phase as we move through the last month of fall.

The above image shows changes in sea surface temperatures (SST's) from September 2012 to October 2012. The blues signify a cooling temperature trend, while reds display warming of the waters. If we take a look at the north central Pacific in whole, we see a stark cooling trend coming around from east Asian waters to the waters south of the Aleutian Islands. Also, notice a slight warming trend focused in and to the north of the Aleutian Islands to the west coast of Canada, as far south as Baja California. This warming then moves west, forming a backwards 'C' around the cold pool.

What we are seeing here is a vaguely textbook example of a positive PDO. In a positive PDO, a cold pool of water extends from East Asia and across much of the north Pacific. Warmer waters encompass this cold pool, as I described above as a backwards 'C'. In the negative PDO, the temperature anomalies change places, with cold waters forming a backwards 'C' around a warm pool.

Because the PDO is so complicated, I'll put the effects as simple as possible. A positive PDO tends to bring cooler than normal temperatures to much of the nation, while a negative PDO brings warmer than normal temperatures to the Lower 48. So, if we do have this PDO switch from its current negative phase to a positive phase, we could see a cooler winter than I had accounted for.