**This post is dedicated to Daniel Barden, age 7, a victim of the Connecticut shootings.** 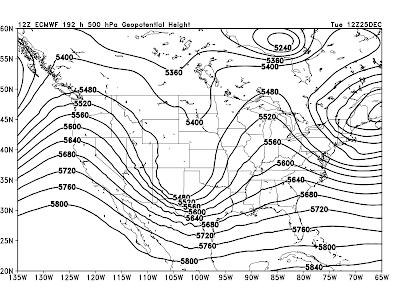 The potential for a winter storm in the Plains and general East US is present between the 26th and the 28th, as the ECMWF is now showing such a potential.

One, this system could be pretty strong when it ejects from the system.
Two, the deep-ness of the depression and neutral tilt tells me it could evolve into a closed low.
Three, a cold air outbreak could follow this system if cold air is available up north.

That ridge present in the eastern US displays a sort of positive PNA feel, with the typical positive PNA ridge on the West Coast also in play. This looks to be a Midwest/Plains storm transitioning to the coast, where the Mid-Atlantic and Northeast may be affected. No guarantees, however. 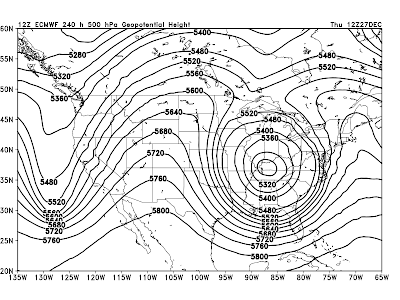 This is the Hour 240 forecast from the ECMWF, once again dealing with 500mb heights. We see that the storm system has now evolved into a very deep closed low, meaning it has been cut off from the jet stream. Closed lows are notorious for staying in place for days on end, but this does not look like it will happen. We have the system squeezed in between two high pressure systems. One is in New England, prohibiting the storm from going directly northeast, and the other ridge is in the Rockies. Considering the ridge in the Rockies looks much stronger, and the angle of the ridge favors a direct east path, I do not find the idea of the Midwest, Ohio Valley and Northeast getting a winter storm totally off the table. This closed low would indeed bring in a lot of cold air to the Midwest and Great Lakes.

The ECMWF also shows a very nice accumulation of snow in the Midwest from this system on the 26th, shown as the colored values above the dark blue 32 degree temperature line: 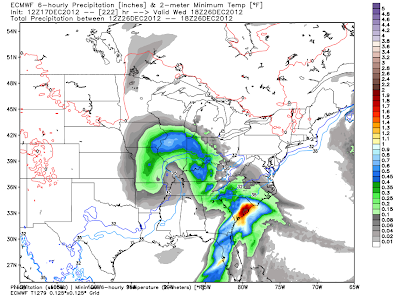 And the very high amounts of precipitation in the Mid-Atlantic some time later on Dec. 27 tell a possible severe weather story: 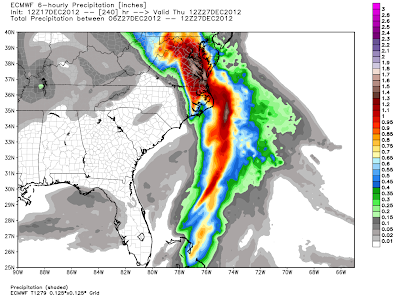 All in all, it's looking pretty interesting. While we are still a while away, we are in a negative PNA pattern favorable for an amplified storm track. If a steep negative NAO evolves, we could have a highly meridional flow more conducive for strong storms.

Andrew
By Andrew at 4:16 PM 9 comments: Links to this post

I have once again upgraded the title of this event from 'Potential Blizzard' to 'High Impact Blizzard'. The following represents my truest thoughts and NO hype. All posting from now on is directly related to what you should know to prepare yourself for this high impact blizzard event.


**This post is dedicated to Daniel Barden, age 7, a victim of the Connecticut shootings.**


"This is truly a battle of the models." 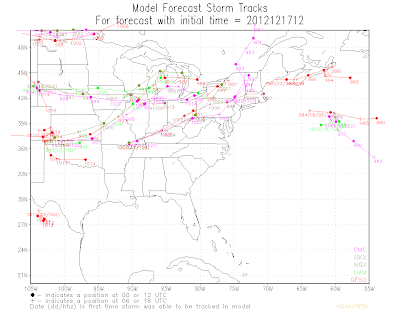 What you see above is storm tracks for the future from several models of the 12z suite. The pink lines are from the Canadian model, the brown lines from the United Kingdonm's UKMET model, the asparagus-colored line signifies the NOGAPS model, the neon green shows the NAM model, and the red belongs to the American GFS model. We are looking at the lines that go from Oklahoma to Illinois and Wisconsin- that is our storm.

Recently, the models have been converging on this solution of taking the system northeast into Chicago, possibly just north, giving the biggest snow to north Wisconsin and similar areas. In a bizarre twist, the NAM was the one that started this new north trend, and the storm isn't even inside it's domain!! If the storm isn't inside the domain, it means the model is essentially shooting in the dark- models have no idea what's going on until the system is within the forecast domain. That said, we can (temporarily) render the NAM model (and its ensembles, the SREF) out. Regardless, all of the models mentioned above are in the 'North Camp', where the storm goes into Chicago or nearby areas.

Here's where things get interesting, and this is why this truly is a battle of the models.

This is an image of anomaly correlations at the 500mb level from several global models. In the upper image we have the North Hemisphere, and the South Hemisphere is on the bottom image. On the bottom left we have the correlation statistics, and if we look closely, we see the numbers. The ECMWF beats out the GFS easily with 0.926 correlation on the ECMWF to 0.901 correlation on the GFS. The UKMET ties with the GFS. That said, there is reason to believe the ECMWF- something many are not doing at the moment. The ECMWF has historically done well with winter storms and is known for Catching onto solutions other models have not, so such a situation playing out here is not out of the question. 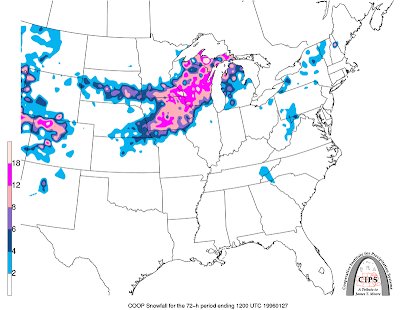 Analogs of situations similar to this one can also be helpful. This is a 72-hour snowfall accumulation of the top-ranked analog for this storm system. It was in 1996, and heavy snow fell in the Upper Midwest, something that would suggest a North Camp solution. Analogs can be deceiving, but it is worth mentioning a negative PNA and negative NAO were present for this storm system. I can't say I don't believe this analog could repeat itself this time around.

Frankly, it comes down to which is more significant at the moment- the consensus or the outlier. On one hand, we have several semi-reliable global models going for one solution, with one model and one ensemble set (both extremely reliable) going for another solution.

I'm not willing to pick a forecast preference, because this is an epic battle I feel will need to be settled in the day or two away from the system's impacts. However, no matter the track, there will be heavy snow and very high winds- such a combination would indeed produce blizzard conditions. I will fill you in more tomorrow morning and through the evening as more information becomes available.

Here's my new call for a forecast graphic: 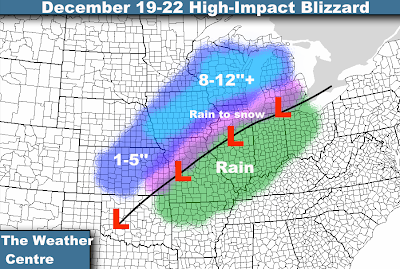 Andrew
By Andrew at 4:00 PM 7 comments: Links to this post