This is the winter forecast for the 2014-2015 winter season North Atlantic Oscillation, or NAO.

In this sea surface temperature anomaly chart, we'll examine is the presence of warmer than normal waters near Greenland. The presence of above-normal water temperatures near Greenland isn't just some random occurrence; it's a legitimate pattern in its own right. In the winter, warmer than normal SSTAs near Greenland and eastern Canada can allow for persistent ridging/high pressure to form over the land mass. You Northeastern weather junkies may know this phenomenon to be the negative phase of the North Atlantic Oscillation (NAO); the Weather Glossary definition for the NAO can be accessed here.

Considering we're likely heading into a weak El Nino, and warm waters are indeed surrounding Greenland, high pressure/ridging over Greenland might be something to watch carefully for. We could even see some upper-latitude 'blocking' scenarios*.

Given that the warmer than normal sea surface temperatures over Greenland may produce ridging/high pressure, which is the negative phase of the NAO (confirmed by the negative correlation in the January panel), and forgiving the unnecessary wordiness of this sentence, the NAO is expected to be predominantly negative this winter.

Andrew
By Andrew at 12:35 PM No comments: Links to this post

This is the forecast for the Arctic Oscillation (AO) during the winter of 2014-2015.


(From the Official winter forecast) The above image shows a pretty daunting image of the stratosphere, so let's decipher it. The red line shows observed temperatures at the 70 millibar level of the stratosphere, between the 65N and 90N latitude lines. The dashed green line illustrates average temperatures for any given time, while the gray outlines give an indication of the record high and low stratospheric temperatures for any given time period over the past few decades of records.Gazing over the image above, specifically around the most recent records of temperatures, we find ourselves on the above-normal side, with that red line bursting up into above-normal territory more than once in the last few weeks. This year's warmth at the 70mb level looks to be a bit more prevalent than that of last year, as you can see just to the left of the center of this image.Why is this important to the coming winter? Above-normal temperatures in the stratosphere allow for a higher threat for persistent high pressure to form over the Arctic Circle, and general upper-latitude area. The polar vortex, a strong low pressure system of cold air located across the troposphere and stratosphere, can be strengthened during times when the stratosphere is colder than normal, and weakened when warmth prevails.When this warmth prevails, strong bodies of high pressure can punch north from the lower latitudes into the Arctic, disrupting the polar vortex. When this happens, fragments of the vortex can break off and be sent to the lower latitudes (as was seen last winter), or the whole vortex can be shunted down south. If the high pressure sticks around in the Arctic for long periods of time, it can be referred to as "blocking" high pressure, for the way it "blocks" the pattern from flowing east to west around the globe, since the high pressure remains stagnant and backs everything up.If the stratosphere is to remain warmer than normal this winter, the polar vortex may fragment, leading to increased risks for cold air outbreaks in North America. 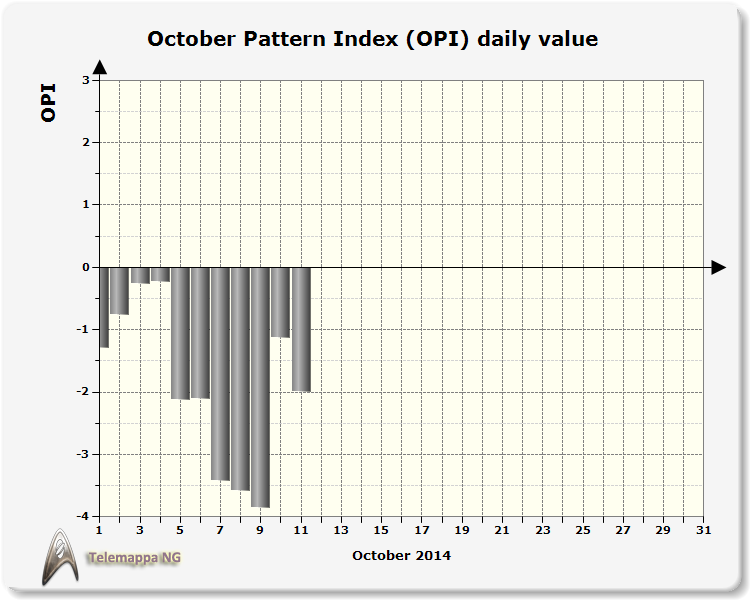 The above image shows anomalies of the October Pattern Index over the last several days, since the start of October. The OPI, the concept of which was brought about by a group of Italian scientists, says that monitoring of the atmosphere during the month of October can yield great hints at what the coming winter will bring. October is a month well-known for big winter-predictors showing their cards for the coming cold season (i.e. the LRC, and Judah Cohen's Snow Advance Index (SAI)), but it may interest many to know that the OPI may be one the best, if not the best predictor of the upcoming winter season out of the three mentioned above.

The explanation page of the OPI tells of the index's incredible accuracy, around 90%, of being able to predict the December-January-February Arctic Oscillation. In the winter, a negative phase of the Arctic Oscillation (AO) means the polar vortex is weak and is more prone to sending cold outbreaks to the mid-latitudes, while a positive AO indicates a strong polar vortex, hence a warmer winter increases in probability.

Though we aren't to the middle of October yet, early indications are that the OPI is sustained in a negative phase, today plummeting to around -2, as shown above. If the OPI stays in that negative territory for the rest of October, chances are the winter may have a negative Arctic Oscillation. The AO doesn't define the winter in terms of cold overall, but it can give a good hint at the temperature pattern for the coming winter.

Based on the OPI, the stratosphere, solar conditions, as well as my analog years, the Arctic Oscillation is expected to be negative this winter.

Andrew
By Andrew at 12:35 PM No comments: Links to this post

*Confidence in this forecast is low. Use with caution.

The expectation for this winter is that we will see substantial blocking high pressure stationed over Greenland, known to many weather enthusiasts as the North Atlantic Oscillation (NAO). When the NAO is positive, strong low pressure occupies the area around Greenland, while ridging high pressure covers the land mass in a negative NAO. When the jet stream shoots north due to the ridging over Greenland in a negative NAO, it then plummets south as it approaches Europe. This introduces an area of colder-than-normal temperatures over northern and western Europe. Depending on the strength of this negative NAO, temperatures may end up warmer than normal in southeastern Europe, though it is not marked on this map.

As for precipitation, slightly below normal anomalies might be expected in northwestern Europe, before a gradual trend to normal, or even slightly above normal anomalies evolves towards Italy and nations to the east.

Due to the low confidence in this forecast, the description here certainly isn't as impressive as it could be. Any additional questions concerning Europe may be asked below.

Andrew
By Andrew at 12:30 PM No comments: Links to this post

The winter forecast for Canada this season calls for alternating swaths of alternating temperature anomalies. In western Canada, particularly in British Columbia, slightly warmer than normal conditions are expected, as conditions warrant potentially consistent ridging along the western coast of North America. On the other side of Canada, covering the Nova Scotia, Newfoundland and Quebec areas, there is a threat of periods of very warm conditions. This stems from the increased risk of ridging over the Greenland region (known by many as a negative NAO phase), and could stick around for some time.

In the middle of Canada, right around Manitoba, Saskatchewan, Ontario and into the Nunavut regions, cooler than normal conditions are expected. This projection comes from the prediction that the two areas of ridging on either coast of North America may allow a piece of the dreaded polar vortex to be forced south into Canada, possibly towards the US, thus resulting in very cold conditions.

No precipitation anomalies are marked, as uncertainty is too high to demarcate any anomalies at this time. However, drier than normal anomalies might be seen in far southwestern Canada in due time, with slightly wetter than normal conditions in southern Ontario in the near future.

Explanations of why this forecast is as it is can be found on the Official 2014-2015 Winter Forecast post, accessible from the Winter Forecast Directory link at the top of this page.