Invest 95 has developed in the waters west of Atlantic. This appears to be the first piece of energy in the open Atlantic with the chance to develop into a tropical cyclone. 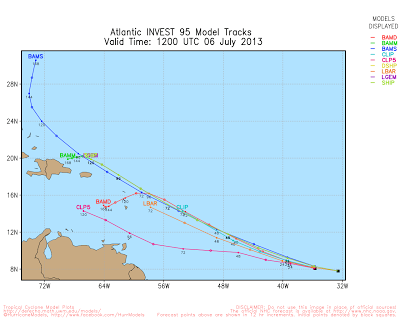 Invest 95 is currently placed at roughly the 8N latitude, 32W longitude and is seen on satellite as a mass of tropical convection with no clear circulation at this time. The current model suite shown above has Invest 95 moving on an increasingly-northwest-ward path over the next few days. There is a consensus of the storm moving north of the Dominican Republic and Haiti, but likely to affect both nations should the current model consensus hold. 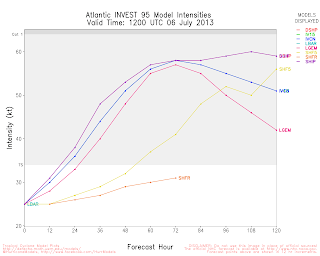 Intensity forecasts for Invest 95 have a consensus of the system developing into a tropical storm in the next 36 hours, at which point it would be named Chantal. From there, the model consensus encounters large divergence at around the Hour 96 mark, at which point the storm begins to curve out northwest of Haiti and the Dominican Republic. As of now, all that seems likely is that we will see Chantal form in the next 24-48 hours.

The image above shows steering winds for a system with a pressure of 1000 millibars or above, which includes Invest 95. We see Invest 95 is shown by the yellows and oranges in the bottom right corner of the image. Using the white lines superimposed on the colors as a guide to where Invest 95 may go, it appears more likely to me that the track of this invest would tend to move more westward than northwest. From there, it does appear more probable that the invest (or Chantal, at that time) will start a northward movement.
From this northward movement comes the big question mark- just where will this system begin to turn north? I believe it has two options- turning north east of Florida or east of the Yucatan Peninsula. The first option would have the storm moving along the Southeast coast before likely moving out to sea. The second option would retain a landfalling US threat along the Gulf Coast. If Chantal were to enter the Gulf of Mexico, the chances of further intensification would be great. I will update the situation tomorrow.

Andrew
By Andrew at 11:43 AM No comments: Links to this post