Pattern Overview From February 9 to February 23

This is a discussion of the atmospheric pattern from February 9th through February 23rd. 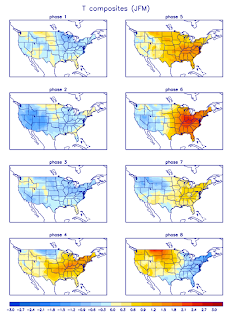 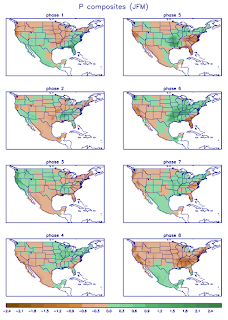 When the Madden Julian Oscillation is in Phase 1 during the second half of winter into March, cooler temperatures tend to prevail across many areas east of the Front Range, especially prevalent in the Great Lakes and into the Northeast. Temperature anomalies can average a few degrees below normal, and this phase is best known for providing the aforementioned regions with the best opportunities for cold outbreaks. We are not seeing that cold trend get too strong at this time, however, because the MJO is very close to the center circle. When the MJO tracks into that center circle, it means convection is too weak for any adverse weather to be inflicted on the nation. In coming days, we will see the MJO rebound back into a modest-strength Phase 1, but then swing around into Phase 2, as the ECMWF model illustrates above. If we look again at the charts on the left, we find temperatures bounce back to relatively normal (but still cool) levels for those east of the Mississippi. A striking difference is the sudden appearance of well below normal temperature anomalies in the Rockies. It is plausible that we could see these below normal temperature anomalies appear as we progress into the next several days. Precipitation wise, while Phase 1 does favor coastal storms as exhibited by above normal anomalies in the Southeast, this wet sector shifts more inland into the southern Ohio Valley during Phase 2. This tells me that we could see storms stay more inland and affect the Ohio Valley more-so than the Northeast. That's not to say coastal storms will be rid of the equation, but they will begin to find a discouragement for such a coastal track. Before long, we are entering a modest Phase 3. This is the last favorable phase before the cold anomalies leave. Phase 3 holds the cold across much of the nation, and precipitation continues to move more inland, now more towards the southern Plains and even into the southern Midwest.

Medium range forecasts for 500 millibar heights by the European model (left) and American model (right) show general agreement in the setting-up of low pressure anomalies across the East US, and high pressure anomalies across the West US. This is a textbook example of a good scenario where to get cold and storms to flow into the East. Depression of heights in the East leads to a suppressed jet stream, which allows cold to flourish in the region. The suppressed jet stream strengthens the subtropical jet stream and provides additional opportunities for coastal storms. Long range forecasts do show this example of storms dropping south from the Pacific Northwest as the two jet streams merge and the storm then heads up the coast. A lack of high pressure over Greenland is a major catch that could put a flaw in this system. Without the high pressure over Greenland, I am hesitant to believe that this scenario will lead to big Nor'easters. While they are indeed possible, the lack of Greenland high pressure could lead to these storms just going out to sea rather than hanging around on the East Coast. This situation will have to be carefully watched before any decisions are made about who gets the storms and who is left out.

February 9 - February 16: Threat for coastal storms remains through the week. Valentine's Day likely to bring Nor'easter. Accumulations flirting with one foot in spots. Warm temperatures and high pressure prevails in West US until end of week.

February 16 - February 23: Persistent low pressure moves out of East US. Pacific pattern begins to turn unfavorable, Madden Julian Oscillation begins cycling through Phases 3 and 4. Cold temperatures early in week are erased by gradual warm up into end of week. Coastal storm threat remains, may be suppressed from unfavorable Pacific pattern.

Andrew
By Andrew at 2:02 PM No comments: Links to this post

The new American GFS model is predicting a massive Nor'easter to develop off the coast of New England around President's Day.

The energy for this storm is projected to drop south from the Pacific Northwest and strengthen as it enters the southern Plains. From there, it swings east and develops a negative tilt as it pushes northeast into the East Coast. The development of a negative tilt means the highest vorticity values at the 500 millibar level are positioned to the southeast. This is observed in the upper left hand panel of the above forecast image, which is valid for the night just before President's Day.  Typically, negatively-tilted storm systems are watched in the spring, when cold air can run aloft and provoke stronger thunderstorms than positively-tilted storm systems. As you might guess, positively-tilted storm systems have their highest vorticity values tilted towards the Southwest. The presence of a negatively-tilted winter storm would likely increase precipitation totals as cold air runs aloft and convective snow bands are enhanced. Thundersnow would naturally be more widespread in the presence of cold air aloft.

Snow totals from this system in a 24 hour period would approach the one foot mark, especially in western Pennsylvania. West Virginia and eastern Kentucky could surpass 6 inches, as well as western parts of the state of Virginia (not the state WV). New York, eastern Tennessee and portions of Maine could see shovelable snow, while other states get more of a quick, light accumulation. This forecast is certainly going to change, but this potential must be closely monitored. High latitude blocking will be increasing, leading to higher chances for these Nor'easters.

There is potential for another coastal storm in the Northeast on Valentine's Day.

Above is a 4-panel graphic forecast for the morning of February 12th. We see our storm system as a deep low pressure center in the eastern Rockies, about to eject into the Plains. The strength of the system is reflected in 500 millibar vorticity values in the top left panel. Reds indicate low pressure systems, purples show high pressure. Downstream from this storm, we are seeing some building of higher pressure in the Southeast, something that typically can drive storm systems further north than south. To me, the system wants to press south based on the mid atmospheric flow, but that can't happen unless dissipation of these higher pressures occurs in the Southeast. Considering how negative frictional torque values have also shifted north in response to the subtropical jet stream's northward movement, it would seem to me this system may be a bit too far south in this model's forecast.

Regardless, by Valentine's Day, the storm system has moved across the Plains, Midwest and Ohio Valley to arrive offshore the Northeast as a coastal storm. If this were to occur, another layer of accumulating snow would be put down on the same areas that are waking up today to nearly 40 inches of snow in some spots. The lack of high-latitude blocking over Greenland puts a concern out of how close to shore this system will be. If there is little blocking over that region, it is possible the models may slowly shift the storm more eastward with time. However, if that actually happens remains to be seen; my confidence is low on such a potential.

The same model forecast results in upwards of 6 inches of snow for many in the Mid-Atlantic and Northeast into New England. We are still a while away from this event, but it should be watched very closely. Valentine's Day has a reputation for having a major winter storm for some part of the nation.