The 12z ECMWF run today took Tropical Storm Isaac, bombed it out again in the Gulf of Mexico, and slammed Isaac into the Gulf Coast as a major hurricane, with a central pressure of 964 millibars.

Many have been discounting this system as an outlier, and this continues, even as this is not the first time the bombing-out solution has been shown with Isaac. A very similar solution and slightly different track was shown yesterday by the ECMWF.

Now, it's a model war, like the ones we will see in winter: ECMWF vs. GFS for Isaac's track. Let's look at a major component of the track.

In this map, we can see Isaac just about to enter the Caribbean. But notice the large disturbance creating quite a commotion along the East Coast. The models are interpreting this differently. As you can see by the arrows in the dark red off the East Coast, the direction the winds are going is northeast, hence the East Coast-threat tracks being shown by other models.
The question is if the disturbance's influence will be enough to force Isaac north and take an East Coast-threatening track, like the GFS and others say, or will the system be able to pass by the strong northeast winds and pass into the Gulf of Mexico, where a dangerous scenario could unfold, as the ECMWF describes.

I did some deep digging and came upon an observation chart for 12z at 250mb. I also found the 12z GFS' 12z initialization chart at 250mb. I compared the two, and found slightly stronger winds in the GFS' forecast. While it may not seem huge now, the implications could be massive in the long range. 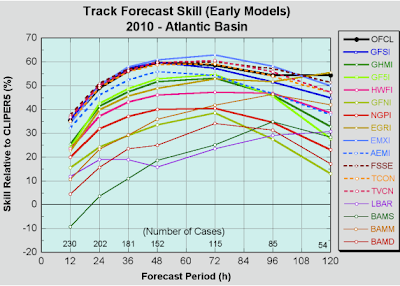 On the right sidebar is the skill percentage of the models, while the bottom bar has the forecast hour. If we look on the graph and find a light blue line leading the pack in skill, we look to the right and see it is the EMXI model, also known as the ECMWF. This shows that the ECMWF led the model forecasting skill for 2010. While a slight lapse may have occurred towards hour 120, the skill remains at the highest notch. 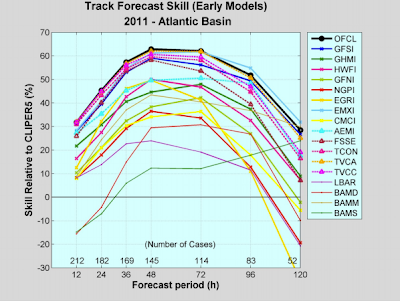 In 2011, we see a worse performance by the bottom forecasting models, and a tight race for the best forecasting model for 2011. If we look closely, we see the ECMWF and NHC forecasts tied in the early forecasting hours. But they both dropped off going into hour 120. Here's the thing- the EMXI model (ECMWF) dropped off just a little less than the NHC, showing that the ECMWF emerged victorious for best model track skill.

So, now with two runs of a major Gulf Coast threat under its belt, along with two best model track skill awards, one can not help but wonder if the ECMWF is correct in the assumption that the Gulf Coast is indeed at risk. I, for one, like to keep all options on the table. Frankly, I think the ECMWF is correct, and past analogs with a similar situation as Isaac think so too...

Climatologically, more systems in Isaac's position tend to go into the Gulf of Mexico and make landfall in that area, rather than hitting the East Coast. This is a dramatic shift from a very short time ago, when more analogs were pointing to an East Coast run than the Gulf of Mexico. Time will tell, but this is just another piece to add to the puzzle.

Burst of Convection At Isaac's Center

A burst of convection has been observed both on infrared and microwave imagery, providing some evidence for possible strengthening in Isaac.
A recent northwest movement was also observed, and this could dampen hopes of a landfall in or entering the Gulf of Mexico.
I will post another update this afternoon. 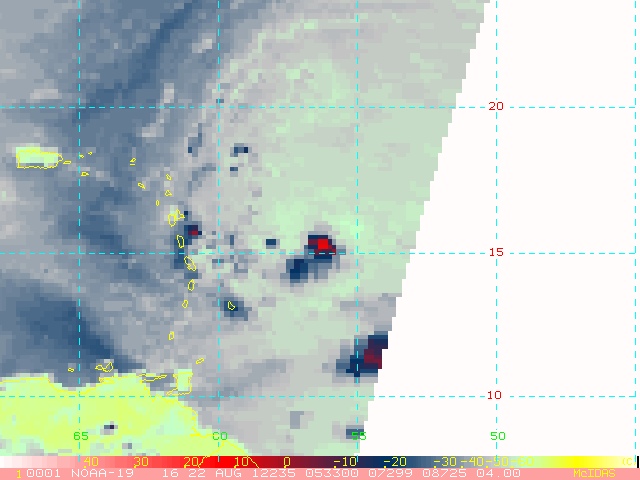 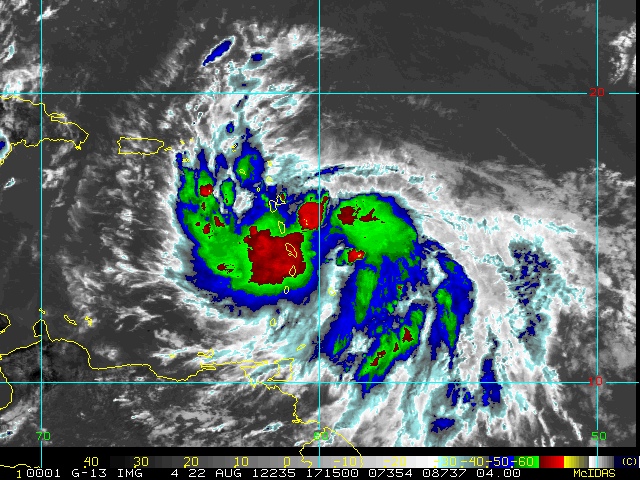