THIS DISCUSSION IS OLD.
CLICK HERE FOR THE NEW DISCUSSION.

The major Thanksgiving storm that I made the call for a couple days ago will still happen- however, now the storm system will be forced offshore thanks to a positive NAO. 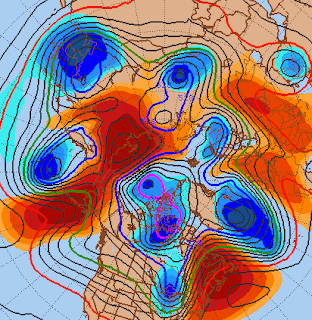 (Originally published November 10)This is a 500mb height anomaly forecast, valid a few days out. As you can see, there isn't much going on in the United States, so why am I showing you this? Well, we have to go to East Asia for that answer. If you look in the top left corner of the image, you will see a strong trough present in East Asia. It has been shown that there is a 6-10 day gap between what happens in East Asia and what happens in the East US. So, if we use this forecast (valid November 13) and apply the 6-10 day gap to it, we end up at November 22, or a day or two from Turkey Day.

We can also use the Lezak Recurring Cycle (LRC), which is, in the simplest of simple explanations, a repeating pattern that forms every fall and cycles through the winter. This pattern first forms in September-October. A strong storm system hit the Plains, Midwest and Great Lakes on October 2. If we use the expected 51 day gap between each cycle and add on a day or two to give the forecast a little wiggle room, we find this strong storm system hitting the Midwest/Great Lakes on November 21-23, which falls right on Thanksgiving! 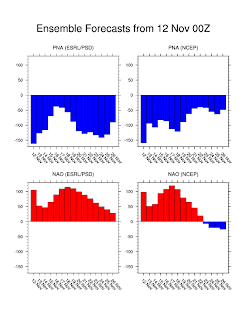 However, this storm system will miss the United States. You see, while East Asia will be correct in a major storm hitting the East Coast, a positive NAO will get in the way of this system actually getting close to land. When you have the North Atlantic Oscillation (NAO) in a positive state, the jet stream is diverted east out to sea for storms that ride the Gulf Coast and are known as Nor'easters when the actually go up the East Coast (commonly seen in a negative NAO).

Despite this East Coast miss, the Plains may still find some precipitation in the forecast for Thanksgiving. This Hour 252 forecast of the GFS Ensembles on the evening of Thanksgiving depicts may individual ensemble members showing big depressions in the lines, which are storm systems. The lower the depressions, the stronger the storm system. Some members are even forecasting a big green circle. This means a cut-off low is present, which is a regular low pressure system that is no longer influenced by the jet stream.

In conclusion:
•The Major Thanksgiving storm will still verify- but it will be directed offshore.
•The Plains may get in on some wintry fun, however.
•Warmth expected for the South.

The Madden-Julian Oscillation (MJO) is moving into phases that are deemed conducive for El Nino development and sustaining. These phases are historically charted as Phases 6-1, while Phases 2-5 are known to help La Nina effects develop.

The latest MJO forecast, while pretty far out, is indicating that entrance into Phase 1 appears possible. Phase 1 of the MJO is known to bring cold and wet conditions to much of the East US. Considering it falls within the historically pro-El Nino region, I anticipate the El Nino to get a very quick boost of warmer waters and enhanced El Nino effects.

Despite this quick boost, if I extrapolate this proposed Phase 1 forecast out based on a developing MJO pattern, this boost would be quickly eliminated as the MJO would likely then transition more into phase 2/3 before possibly re-routing back into the circle in the middle (commonly called the Circle of Death), where the MJO is too weak to have any effect on the weather.

Andrew
By Andrew at 4:20 PM No comments: Links to this post

Long Range Lookout: Stormy Start To December For East US

I am seeing a very stormy pattern emerging just after Thanksgiving and into the first days of December. Let's go into why I think this will happen.

The above images are of 500mb height anomalies from 3 different forecast periods of the GFS Ensembles (GEFS). If you look in the upper left hand corner of these images, you will see a shade of blue encompassing none other than East Asia. I think you know what'll happen next.

If we apply this 6-12 day rule to the forecasted troughs (low pressure systems) in East Asia to the East US, we are likely to see a very stormy pattern begin immediately after Thanksgiving and persist through the end of November into December. This stormy pattern will bring unwanted troubles to the areas still reeling from Superstorm Sandy. The 'good' news is that this stormy period will not have any extreme storm systems like Sandy. However, bouts of heavy rain and snow are possible, if not likely, for much of the East going into the first week of December.

Andrew
By Andrew at 4:10 PM No comments: Links to this post