TOMORROW
Tomorrow will be the beginning of the severe weather outbreak. Tomorrow's outbreak will occur in the Plains into the Midwest. Warm air will eject into the Plains from the Gulf and Mexico regions. As that warm front moves east ward, a cold front will drop to create a squall line and/or multi-cell storm cluster. The lower level jet stream will pump warm, humid air into the Plains and Midwest. The low level jet is nocturnal, so strong storms can be expected to continue, if not strengthen, over night.
A snowstorm will accompany the system on the US/Canada border.

SHORT RANGE (APRIL 4-5)
The severe storms will continue across the US, hitting the Ohio Valley and Southeast before trailing into the Atlantic Seaboard and off to sea.
The snowstorm will be a multi-day event and continue through the border.

LONG-RANGE (UNTIL APRIL 7)
There is some interest in the period of April 6-7 of potential storms, but that is too long range.
By Andrew at 9:18 PM No comments: Links to this post

Images are from the NAM, starting at hour 33 and increasing by 3 hours every image.

This is an area of concern for the South, because supercells are much more of a deal than most people think. With proper winds, supercells are the most apt to produce tornadoes. Please watch out as we go into this event.
By Andrew at 5:53 PM No comments: Links to this post

Above image is 18 hours out. All images below increase by 3 hours (example next image: 21 hours out.)

This is a series of images from the supercell parameter forecasts from the NAM.
We see a very defined area of supercell potential in the northern sector of the images. That said, the northern sector is likely to receive a multi-cell cluster of storm cells. These will be fed by the low level jet stream, which will provide fuel for the storms. The threat for damaging winds and tornadoes also increase.
By Andrew at 5:50 PM No comments: Links to this post 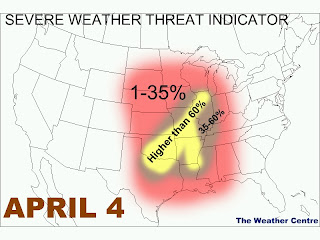 By Andrew at 5:23 PM No comments: Links to this post

This is an analysis about the images issued previously in this post.

NAM ANALYSIS
The 18z NAM definitely pulled back on the way of tornado threat in North Illinois. However, that region is still outlooked as a big risk area, especially North Central Illinois.
The Weather Centre, seeing how volatile this situation may be, has issued an image for this situation. 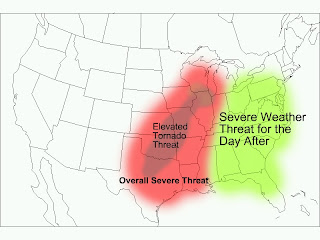 The Weather Centre is concerned with the area outlined as an 'Elevated Tornado Threat' as a low level jet stream will provide the threat for damaging winds and tornadoes. With the Significant Tornado Parameter at levels that we view as extremely concerning, this will be a very tender and volatile situation.
More updates as they come.
By Andrew at 5:08 PM No comments: Links to this post

NAM Model (Starting 27 hours out from now, going by 3 hours every image)

Write up issued next.
By Andrew at 4:47 PM No comments: Links to this post

The significant tornado parameter shot up in this NAM run in North Illinois. That area will be a good chasing area. However, it is incredibly hard, if not impossible, to predict areas where tornados may occur.
By Andrew at 10:31 AM No comments: Links to this post

This is part of the April 3-5 Severe Weather Outbreak series.
A cap is a region of negative buoyancy which suppresses the development of storms.
A strong cap is hard to break, thus storms may not develop.
A weak cap is easy to break, thus storms are likely to develop.
Regions with more negativity on the map indicate a stronger cap.
Below is a map of CIN (convective INhibition). 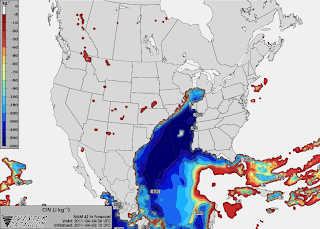 Here, we see a very strong cap over the Plains. That will be working to hold warm air in and make the atmosphere more unstable. Using this map, we can determine the Plains will likely get the brunt of this.
In the Souther Great Lakes, we see a much weaker cap. With that as weak as it is, it can be determined the worst weather will likely not occur there. That may be why the NWS office in that region only has North Illinois down for showers.
We will wait and see.
By Andrew at 9:29 AM No comments: Links to this post

However, some things stayed the same.
1. The system dropped off to the Southeast after hitting the Midwest.
2. The storms originated from the South Plains.

Just to give you an idea of how the threat shifted, below is Hour 48 from the NAM. Following that image will be hour 48 from the GFS model.
Now the 48 hour GFS image.
We do see a greatly differentiated threat with the models. 48 hours out is typically when the models have reached a consensus, but for difficult storms like this one, the consensus can be expected tomorrow morning.
(There is a new method for the GFS, but that is much less in terms of threat than the NAM as well. It is better to overguess and be wrong than underguess and have tragedy strike.)
I would take the NAM image, but Dr. Greg Forbes from The Weather Channel said that his specialized tornado forecast was 'moderate to high' a couple days ago. That is significant as his forecast is more short range.
That's the latest update on the storms. Another one will likely be issued tonight, separate from the forecast discussion.
By Andrew at 8:18 AM No comments: Links to this post