I have a very real concern that many of the same areas affected by the late June 2012 derecho may be affected by another potential derecho coming up this Wednesday. It should be noted that derechos cannot be accurately predicted, and this may end up just being a regular cluster of thunderstorms.

The Storm Prediction Center has issued a slight risk of severe weather from far western Illinois to central Pennsylvania, expanding from south central Michigan to the bottom 2/3rds of Ohio and Indiana, as the image shows above. This slight risk area is not angled in a position I would expect to see with a derecho potential, but then again, we are still 2 days out from the potential event. The Storm Prediction Center indicates there is room for an upgrade (possibly to a moderate risk of severe weather) for Wednesday, as their discussion shows: ...THE MIDWEST...
AS THE POTENT SHORT-WAVE TROUGH CROSSES THE MIDWEST...EXPECT SHOWERS
AND THUNDERSTORMS TO INCREASE THROUGH THE AFTERNOON...WITHIN AN
AIRMASS ACQUIRING MODERATE INSTABILITY IN CONJUNCTION WITH DAYTIME
HEATING.  THE GFS AND NAM DIFFER WITH SURFACE FRONTAL EVOLUTION/LOW
POSITION ACROSS THIS AREA...SO DETAILS REMAIN DIFFICULT TO
DETERMINE...BUT IN GENERAL A RELATIVELY BROAD ZONE OF AT LEAST
ISOLATED HAIL/WIND POTENTIAL IS EVIDENT GIVEN MODERATE WLY WINDS
WITHIN THE LOWER TO MIDDLE TROPOSPHERE ACROSS THIS REGION.  ONCE
DETAILS BECOME A BIT MORE CLEAR...MORE SUBSTANTIAL WIND THREAT MAY
BECOME EVIDENT ACROSS PARTS OF THIS AREA...WHICH WOULD WARRANT
INCREASED PROBABILITIES IN LATER FORECASTS. 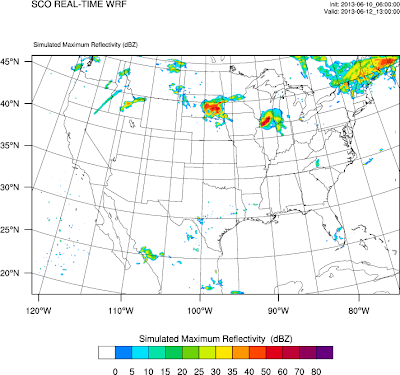 A certain WRF model has a thunderstorm complex entering Illinois by 8:00 AM central time. Other forecast parameters gained from the NAM model depict a very moist surface environment, with precipitable water values closing in on 2.00'' in northern Illinois and surface dewpoints beyond 70 degrees. This high moisture content, combined with instability surpassing the 3000 j/kg mark, sets up conditions deemed as appropriate for potential derecho formation by multiple publications from various sources around the National Weather Service. The shape this complex takes on as it moves into Illinois kind of gives away the idea that it will be at least a bow echo; maybe not a full-fledged derecho, but it will at least be some sort of bowing segment that will add to the damaging wind threat. Cities like Chicago IL, Gary IN and South Bend MI could all be affected by this bow segment. 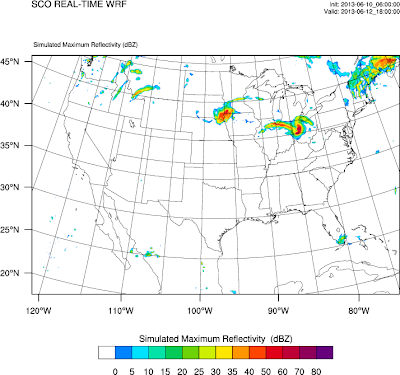 By 2:00 PM Eastern time, this bow segment has progressed into Ohio, practically running over the same areas that were hit by the devastating June 29, 2012 derecho event. This WRF model projects the bowing segment to remain rather small as it moves into Ohio and beyond, although there is still a lot of time for the track and size of this potential derecho to change. Columbus OH, Caldwell OH, Kenton OH and Dayton OH could all be affected by this potential derecho.

Quick note of comparison to those concerned about this being a repeat of June 29- this bow segment event looks to be weaker than the June 2012 derecho, and should cover less ground. The area it tracks over may be very similar, but as far as any potential damage goes, it will likely be exponentially less than what was seen on June 29.

Andrew
By Andrew at 9:19 AM 3 comments: Links to this post