It is likely that there will be a winter storm in the days prior to Thanksgiving.

This is a forecast from the GFS Ensembles out to the Hour 60 timeframe. While all of the colors and lines may seem a little overwhelming, we're only going to focus our attention on East Asia, which is under the deep blue swath in the top left part of the left panel. Another correlation that has been proved effective is how weather in East Asia can be reciprocated in North America 6-10 days after the weather anomaly in East Asia. This includes the presence of storm systems or high pressure in East Asia. The November 18 forecast from both the GFS Ensembles and ECMWF model indicates that a deep negative height anomaly swath will slide down over Japan. If we extrapolate November 18th six to ten days out, we come up with a potential cold weather and storm system time frame of November 24 to 28. This narrows down the timeframe previously set out by the Bering Sea correlation, and if we match up the two timeframes (November 24-28 for the East Asian connection and November 25-29 for the Bering Sea connection), we come up with a November 24-29 potential timeframe for a storm, which can be isolated into the November 25-28 period, which is shown by both connections. Based on these two connections coming up with a common timeframe for a potential US storm system, confidence is quickly rising that this event will happen.

The question now is, where will this storm system go? 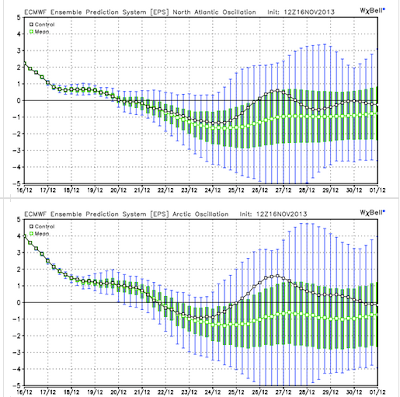 European ensemble projections of the North Atlantic Oscillation (top) and the Arctic Oscillation (bottom) are negative for the timeframe of this storm system. This suggests that the storm system should be sucked into the subtropical jet stream, and ought to go along the South US. The Arctic Oscillation going negative for this system's timeframe tells me that the chance of cold air for the North and Northeast US will be on the rise, and this would theoretically aid in the potential for snow in those regions. 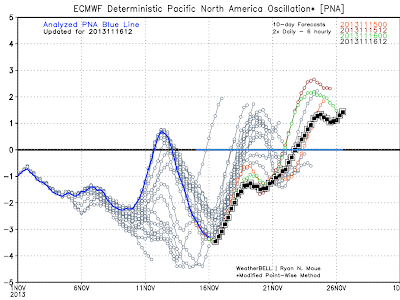 The ECMWF projection for the Pacific-North American index has been consistent with the index rising for the timeframe of this storm system. This would allow ridging to form along the West Coast, and help out the chances for this storm system going to the Midwest and Great Lakes. I'm hesitant to believe thoughts that the positive PNA will automatically force this system to head to those regions, as the negative NAO, if it grabs ahold of this system, will wield a good deal of influence on the track, so long as the system does get into the subtropical jet stream. Model solutions have been variable, but here's my early projection for this scenario. 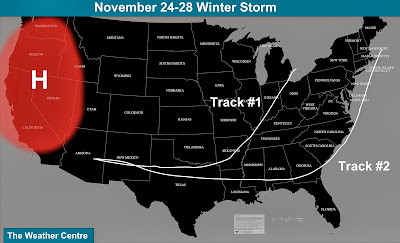 Andrew
By Andrew at 8:09 PM 8 comments: Links to this post