Updated Morning Discussion will be issued at 6:45 AM CST Tomorrow

The 0z models are bad enough that I will issue a full blown discussion tomorrow morning at 6:45 AM CST.

Not much of an update, but here's what it is.


For people wondering if a High Risk will be issued by the SPC tomorrow, I personally say probably not, because of lower CAPE and not enough dynamics likely to come together for violent tornadoes.

Tomorrow morning, I will come out with a new tornado map.

I am closely monitoring the potential for extreme severe weather tomorrow, March 2, 2012.

Discussion...
Have noted Storm Prediction Center's issuance of a moderate risk for Ohio Valley into the nation's Midsection and South Central US.

Model Used for Discussion: NAM due to recent issues with GFS

NAM has been putting out uncomfortably high EHI forecast values for South Illinois into Missouri, Tennessee and Kentucky. This is where the threat should start off with.

Deep layer shear from that point on increases to over 100 knots out west to over 70 knots in the area being monitored for severe weather. This deep layer shear is more than supportive for super cells, and should easily assist any possible tornado threats. Lower Level Jet stream will be quickly moving along with speeds upwards of 50 knots in the areas mentioned above. Jet stream at 300 mb level will be screaming at over 100 knots. Additionally, I have noted the NAM's split flow regime over Tennessee and Kentucky, only further enhancing my fears for this potential outbreak.

Progressing several hours further, the risk begins to shift east. Deep layer shear increases with this shift eastward. Lifted Index will be as low as -8, a very low number to see for early March. This intense lifting is signaling the deep layer shear to also begin to influence the rising air and may begin to spin that rising air. Split flow mentioned previously begins to wear off but is still very much present in the Tennessee/Kentucky region. At this point, surface winds should begin to increase beyond 20 knots.
High theta-e at this point marks the high instability that will be present in the region, even though CAPE measurements reflect a somewhat substantial 2500 j/kg.

Storms should be moving pretty fast, with some exceeding 40 knots in spots, which equates out to 46 MPH. And then there's the issue of storm relative winds. SR Winds at 850mb are going directly opposite of the forecast storm motions. As for exactly what this implies remains to be seen, but it is never a good thing to see two levels in the atmosphere going different directions.

I'm thinking that this won't be a terrible outbreak situation, but it will be pretty rough. This intense wind shear will do its job on updrafts that will be persuaded to rise by 1000 - 2000 j/kg of instability. As the shear takes hold and the updrafts strengthen in association with the moderate instability that will be on the increase, I am thinking that any storms that form will start out with a moderate risk for tornadoes that will be on the rise fairly quickly into the afternoon hours.
Here's my thinking for the tornado risk. 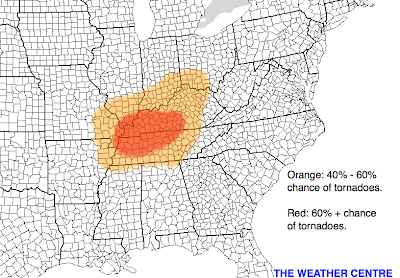 Caveats:
It is next to impossible (if not impossible) to predict tornadoes.
Models are still having disagreements (GFS is a tad less energetic).

Any questions may be asked below.
-Andrew
By Andrew at 3:54 PM 4 comments: Links to this post


Discussion...
The Storm Prediction Center has issued a rare Day 2 moderate risk area for the Ohio Valley into the nation's Midsection and South Central US.
Have tried to pinpoint exactly when the instability will be highest and shearing the strongest. After determining that timeframe, I have found the jet stream to be raging at 140 knots, which equates to 160 MPH. You may not know it, but 160 MPH for a jet stream is extremely similar to the strength that was present for the April 2011 Superoutbreak of tornadoes.
Low Level Jet stream at 700mb level will also be screaming at 70 knots, which is roughly 80 MPH. Again, this is unusually strong for a lower level jet stream, and will only increase to the worry factor for this situation. An atmospheric cap will be virtually nonexistent, meaning any storms that fire will quickly break any cap present and proceed to strengthen.
As for shearing, SFC-700mb shearing will be fairly high, with the maximum values in the 70 knot ranges. SFC-850mb values are lower, coming in at a maximum 50 knots. SFC-925mb shearing maxes out at 30 knots. These amounts seem pretty insignificant, but all this shearing could very well set the stage for an extremely active day tomorrow.
And then there's the issue of deep layer shearing (difference between surface and 500mb winds). Check out the forecast deep layer shear (DLS) for the timeframe I am using: 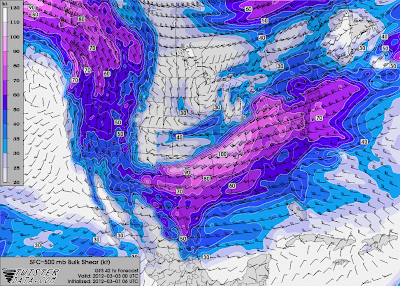 This amount of deep layer shear is incredible to me- values of 100 knots+ are possible per the 6z GFS! Deep layer shear is one of a few main things needed for tornadoes, and the fact that there is this much shearing worries me.
Another worrying thing is how the Storm Prediction Center has put in the wording "Long Tracked/Significant Tornadoes Are Possible".