This is a new discussion about the impending significant snowstorm and potential ice storm for a wide swath of the US. 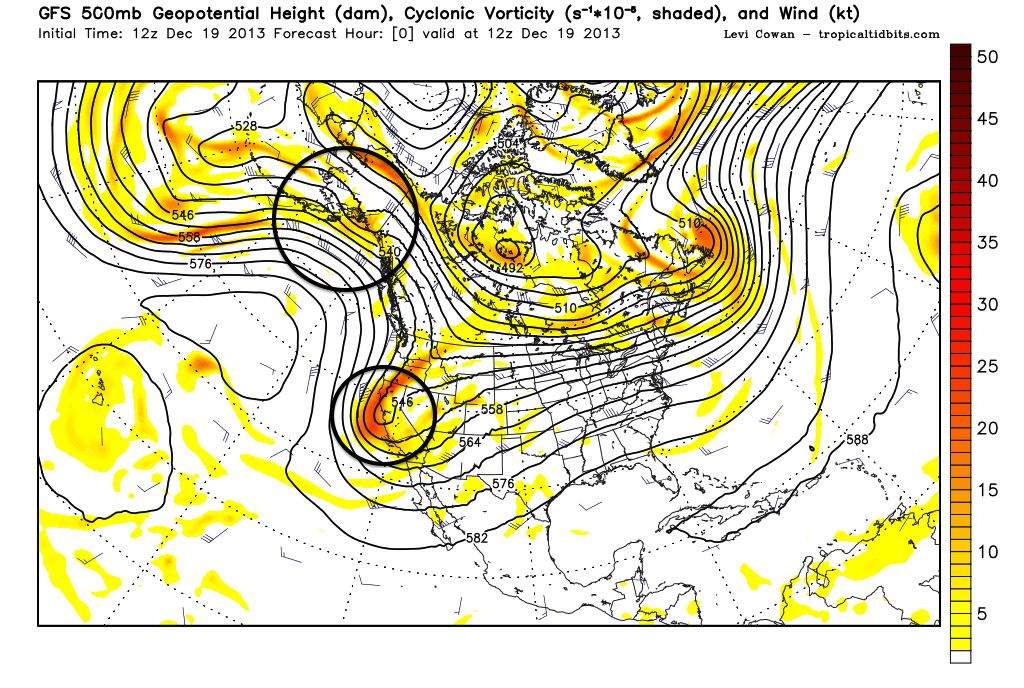 The two pieces of energy that are associated with this system are circled in black. We see a main piece of energy located just offshore the Californian coast, with the second piece of energy just scraping the Aleutian Islands.

There are a few things to discuss here.

I took a look back at the December 14th 0z GFS model forecast and compared it to the same image you see above, which is an analysis image of mid-level vorticity values as of 12z today. When I compared the December 14th image, valid for 6 PM CST tonight to today's 12z GFS forecast for 6 PM tonight, I found a couple of interesting tidbits. For one, the energy is a digging south in the Southwest a bit more than what the December 14th forecast had shown. This is good for those wanting a southern trend in the storm, as it helps prevent a more northern solution. Additionally, and this is probably a more important factor, that energy currently skirting the Aleutian Islands is faster in today's 12z GFS than December 14th's forecast. The faster this northern portion of energy goes into the US, the better chances are for this storm being more impressive than recent forecasts have projected it to be.

Secondly, we have reached what I believe is a crucial point in model forecasts. As the storm system offshore California finally drops down into the Southwest, the troubles models have been having with the speed and intensity of said energy dropping into California will be shed. This means that the upcoming 0z model suite should be forming something that may resemble a consensus of this winter storm. Currently, said consensus would bring heavy snow from portions of Kansas, through southeast Iowa and into Michigan. However, the recent southward trend in the models could continue as some have indicated, and if this is true, expect that heavy snow axis to shift south as well.


Here's the most recent ECMWF snowfall map, showing the predicted location of that heavy snow axis. Model guidance in general has been lighter with snowfall amounts, minus the ECMWF. Despite that discrepancy, I do believe that the strength and pure amount of moisture the system is pulling up should see amounts close to the ECMWF verifying. I really can't see locations in the thick of an all-snow event from this system not exceeding 6-8", even though some guidance systems want to place the threshold at 6". I definitely believe we should watch the models for future shifts to the south; I don't really expect a northward shift at this point. Either the snow shifts south, or we see the current idea verify. Not that enthusiastic about a northward shift from here on out.

As far as this ice storm potential, the exact details are pretty tricky to nail down. A primary factor is the track of the storm still relatively unknown, and the location/intensity of any potential freezing rain/sleet will be determined by the storm track. Regardless of who gets hit with any freezing rain, I think it will be a decent icing event, possibly with decent accumulations as well. I would watch out for changing freezing rain forecasts, as the ingredients needed for accumulating freezing rain are rather tricky to pinpoint, especially with a system as dynamic with this one. One thing is clear- there is certainly potential for an accumulating ice event.

I'll probably be ready to issue my next outlook tomorrow, when the model consensus should either have formed or be forming. Until then, here is a summarization of my thoughts.

-A significant winter storm is probable for the United States, with effects including significant snows and a potential icing event.
-Heavy rains are likely in many parts of the Ohio Valley and Midwest.
-Models should begin to get a substantial handle on this system tomorrow, with the first hints of a model consensus appearing tonight.
-A southward tick in the track with upcoming model runs is not out of the question.

Please do not ask for a specific location getting affected by this storm- this is a very fluid situation, and what you see here is about all I'm willing to say with confidence right now.

Andrew
By Andrew at 4:30 PM 8 comments: Links to this post