It is looking increasingly likely that a winter storm will affect the Plains over the December 4-8 timeframe.

Height anomalies over East Asia in the last several hours suggest the passage of a bout of stormy weather, centered over Japan. This is signified by the deep blues and indicate the presence of such stormy weather. There is a known correlation that indicates storm systems or ridges of high pressure over East Asia can be reciprocated in the United States 6-10 days after the event's occurrence in East Asia. As we see a stormy period begin in East Asia over November 28th, I would expect December 4-8 to be the timeframe for a winter storm in the US as a result of this East Asian correlation. Now that we have been tracking the models for the past several days, and have taken the Lezak Recurring Cycle into account, we are getting some returns on possible tracks for this storm system.

The Lezak Recurring Cycle would indicate that the storm system that passed through the Plains on October 11th should come back to haunt the region, roughly around the December 7th timeframe. As the mid-level chart from October 11th shows above, the system brought its strongest impacts to the Dakotas and Northern Plains, though I suspect that won't be completely the case this time around. For those unfamiliar with the concept, the Lezak Recurring Cycle, or LRC, is a tool developed by meteorologist Gary Lezak that, in essence, can enable forecasters to predict the overall weather pattern months in advance. The gist of the LRC involves a cycling weather pattern that develops in October and November of each year; no pattern is the same from year to year. Around mid November, the LRC begins to repeat, meaning we start to see a similar weather pattern in mid November that we saw in early October. This means that the cycling pattern has begun, and it will continue to cycle on a 40-60 day interval for the next ~10 months before it dissipates over the following summer. This season's cycle is roughly 57 days, which is why we have highlighted December 7th as the connection date for this October 11 system. 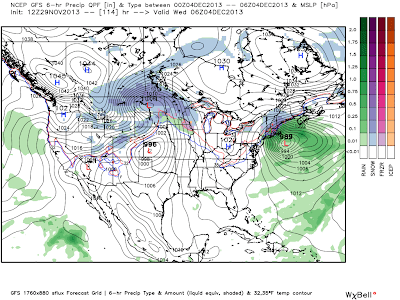 The GFS model has this storm system actually becoming two storm systems, though it is the northern-most one that drops snow across the Plains. This model puts down snow from Montana to Wisconsin, also allotting some snow to the Dakotas, Minnesota and Canada. With the presence of an Arctic front pushing south, I support this idea of the system taking a more zonal approach to its track when compared to the October 11th track. While model forecasts will continue to change until this storm system, I do think that more of the upper Plains and upper Midwest will experience the wintry side of this storm when compared to the portion of those affected in early/mid October. 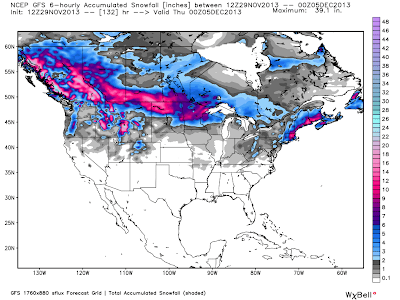 The GFS model puts down totals in excess of one foot across North Dakota, much of Minnesota and a slight portion of Wisconsin. Lower amounts greet the other half of the Dakotas, the rest of Minnesota and the upper half of Wisconsin. This does look to be a rather substantial event, should current forecasts verify, with plowable snow extending across a wide majority of the far northern states.