I'm feeling pretty confident that there will be a significant winter storm, composed of heavy snow and accumulating ice, between the December 19-23 period.

The following text & images are from yesterday's post on this system. The end of this copied portion will be denoted as (End of December 15th post).

A pretty strong storm system is expected to move across Japan in 48 hours, after dumping multiple storm systems over that area in the past few days. This storm system is looking healthy, as defined by the GFS ensemble mid-level height anomaly forecast above over Japan. As I have mentioned on this blog, there is a 6-10 day correlation between weather that occurs in East Asia, and weather that occurs in the United States. Thus, with this forecast image, we arrive at the December 13th date. Go ahead 6-10 days, and we find the potential storm timeframe of December 19th to 23rd. The reason I believe it may be significant is due to the strength of this system on the image above. Unlike the upcoming weekend storm, which saw only a moderate system in East Asia 6-10 days prior, the current East Asian projection is for a strong storm to hit Japan, and long range model guidance senses that this system will also be a strong one for the US. (End December 11 post). 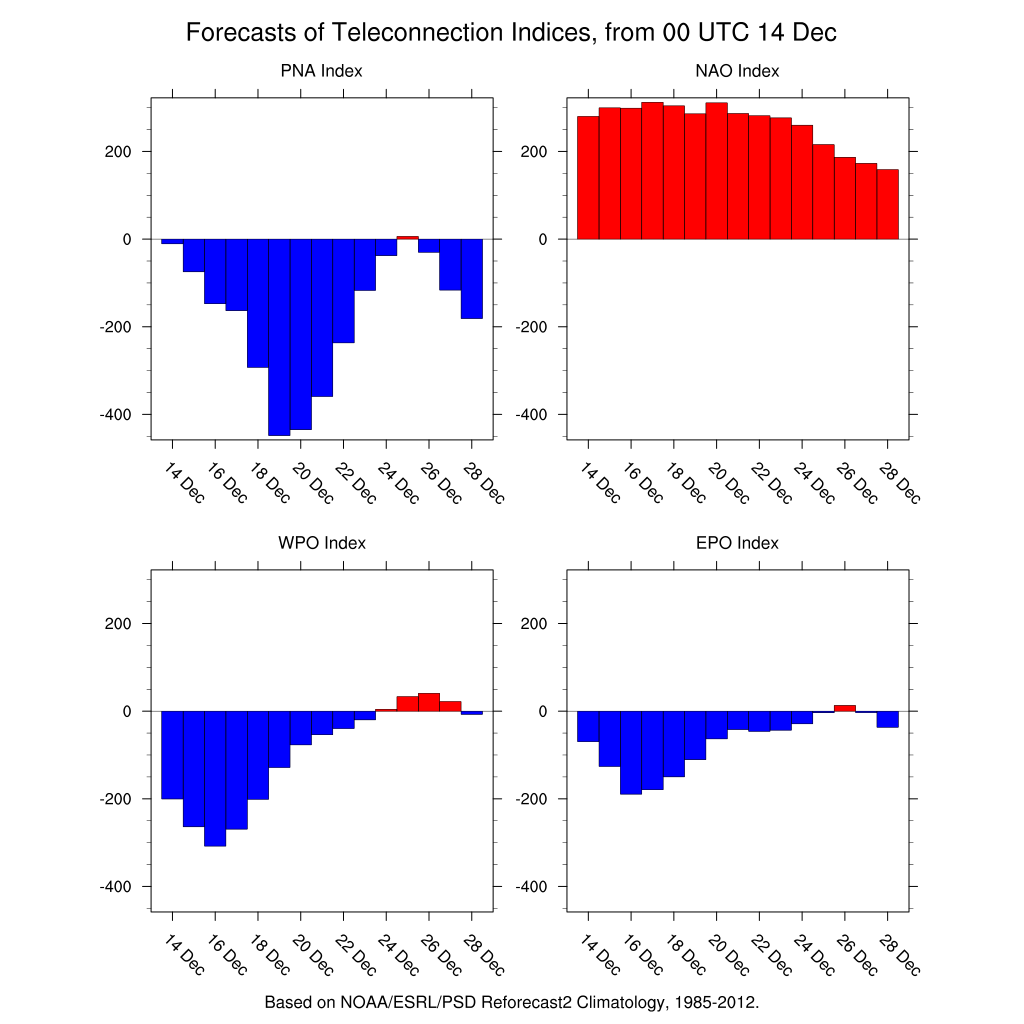 The teleconnection forecast for the next little while from the Earth System Research Laboratory (ESRL) above shows projections for the Pacific-North American index (PNA), the North Atlantic Oscillation (NAO), the West Pacific Oscillation (WPO), and the East Pacific Oscillation (EPO). For this discussion, we will focus on the PNA and the NAO.
The forecast for the Pacific North American index is negative over the time period for this storm system, even bottoming out to its minimum during when I anticipate this storm system to strike. So what does the atmosphere look like during a negative PNA? 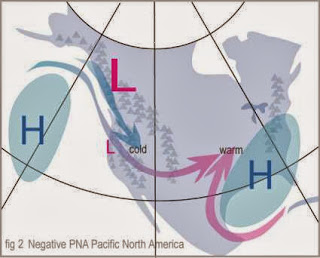 The image above is what is referred to as a negative Pacific-North American index phase (or -PNA for short). The negative PNA results from ridging in the Gulf of Alaska that then produces storminess/troughiness in the Western US. In response to that West US storminess, we then see the development of high pressure in the Southeast. The jet stream in this situation takes storms from the West and runs them north and east, typically delivering snow to the same areas that have been getting snow recently (think Plains, Midwest, Great Lakes regions). An interesting point of interest is how the two arrows on the image above (from NCSU) merge in the Plains. That means that, if the timing is just right, two storm systems could combine (phase) and form a stronger, single storm. History suggests storms that encounter phasing do become anomalously stronger thereafter, and can produce significant wintry precipitation. I'm not implying this will be a phasing situation, just something interesting.The next item to discuss is the projected positive phase of the North Atlantic Oscillation. During the positive NAO, we see stormy weather over Greenland, which shifts the jet stream so the weather pattern is not conducive to those big high pressure systems you might sometimes see over the Bering Sea or even the Western US. The positive NAO pattern is what is called 'progressive', meaning no atmospheric feature really sticks around in any single area, because the atmosphere wants to keep this moving, so to speak. That said, previous forecasts for this storm had the system going north-northeast from the southern Plains into the Dakotas and Upper Midwest. Because of that progressive pattern, I'm really doubting we see such a spike northward. Will we see northward movement? Yes, because the -PNA will supply that ridging in the Southeast. However, the progressive nature of the positive NAO should limit any NNE or even due-north movement by this storm. I would watch out for the storm to move northeast, or even ENE.

This relative measure of predictability map, from the NCEP, gives us a glimpse at what atmospheric conditions are likely to be unfolding by an assortment of colors, defined in likelihood by the legend at the bottom. In this case, we see that blues have a single or low double-digit percent chance of verifying, while oranges define close to a 65% or better chance of verification. This map is valid on the evening of December 20th, roughly a day or two before this storm is projected to strike. There are three things we have to look at with this graphic.The first item we'll discuss in this image is the ridging over the southern portion of the Gulf of Alaska. This ridging is encased in solid oranges right over the heart of the big arcing in the waters west of California and the coast, signaling high confidence that this ridge will be present. If that ridge is present, then is essentially guarantees the set-up I described above. Why? Well, that ridge in the waters off the West Coast then creates West US troughing, which provokes high pressure in the Southeast, and suddenly we have a classic negative PNA pattern.Second, we see a swath of oranges extending from southern Canada into the Rockies. The troughing in the West from that negative PNA pattern tells us that the ensembles are sensing the trough to be our storm system in the December 19-23 timeframe. Like the Gulf of Alaska ridge, the oranges signify over a 60% confidence among the ensemble system with this storm system. Rising confidence among the ensembles for not only the storm itself, but for the NE Pacific ridge tells me that this storm is becoming even more likely.Third, there is a wide body of oranges in the Southeast US. Going back to that negative PNA pattern, high pressure/ridging in the Southeast is expected, so it really isn't surprising that the ensemble set is going with a >60% chance of that ridge occurring. However, with the aforementioned progressive pattern thanks to the +NAO, it is unlikely that we see this ridge take over the East entirely. (End December 15 post).

Now, I was running through model solutions and found something that makes me believe this will be a storm for the Midwest and Great Lakes, possibly not as far south as recent solutions have been indicating.

This screenshot shows mid-level vorticity forecasts from the GFS on the left and from the GEM on the right. Both are valid for Sunday, December 22 in the morning. Right off the bat, we notice significant differences among each model. The GFS on the left has closed off our impending storm system in the far Southwest, extending into Mexico, while the GEM has refrained from closing off the low and has instead propelled it eastward into the Plains and Midwest. As a result of the GFS' closed off solution, the storm system is cut off from the jet stream and meanders eastward into Mexico before finally being pushed northward again. It is this closed off low idea that creates the southern storm track (where snow is given to southern IL, IN, OH and into the Northeast), while the GEM's more progressive solution forms the northern track (snow falls across northern IL, IN, MI, OH into southern Ontario).

To be quite honest, I feel that the GEM has the right idea here, at least in not closing it off in the Southwest. In a recorded list of model bias', the NCEP agency notes that medium range models have a tendency to close off low pressure systems too readily. I feel that this is expressed in the GFS system on the left panel above, and in the latest ECMWF forecast. The GEM also closes off the low pressure system in the Southwest, but releases it from that closed position earlier, thus transferring the storm eastward quicker and going with the northern track. The difference between the GFS/ECMWF and the GEM is that the GFS/ECMWF hold the storm in the Southwest for a longer period of time than the GEM, and that leads me to the second model bias. I have mentioned on this blog that there is a bias that indicates models will hold storms in the Southwest for longer than they actually end up there. The GFS and ECMWF are perfect examples of this phenomenon (seen well in the GFS/GEM panel above), whereas the GEM does not keep the energy in the Southwest for such a long period. Based on those two bias', I do feel like the GEM has an accurate handle on this system.

And the interesting part is, it's not alone.

This dual-panel image shows mean sea level pressure (MSLP) values for Hour 168 from the GEM on the left, and the ECMWF Ensemble Prediction System (EPS) mean on the right. Thus, both images are valid for next Sunday morning. Notice the similar tracks in the MSLP values across the GEM and ECMWF EPS. Timing is a bit off, with the ECMWF EPS faster by a good 12 hours with this system moving into the Ohio Valley. However, the main point is evident in that the GEM and ECMWF EPS agree on this faster ejection of the system out of the Southwest. I feel that the GFS and ECMWF operational models are holding the energy in the Southwest for too long due to that bias, and while the GEM is also subjected to the same bias, it would appear that the model is circumventing it and is going with a quicker solution. 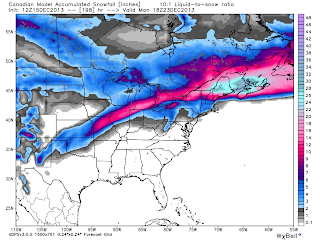 I do think that one part of the model tendency to hold that energy in the Southwest might be due to the aforementioned negative PNA during this timeframe, but with the PNA gradually rising to positive territory around Christmas time, as well as the previously-discussed model bias', I doubt the storm would be able to stick around in the Southwest for as long as the ECMWF/GFS believe it will.

It's still a little early for any projected outlook due to model confusion, as well as a couple things I want to monitor over coming days to see if a southward shift shown in the GFS/ECMWF may be a valid possibility (though as I said, I'm not sold on it yet).

Andrew
By Andrew at 5:34 PM 6 comments: Links to this post