**Notice: Due to continued confidence in my February 21-23 forecast, there will not be a new post.** 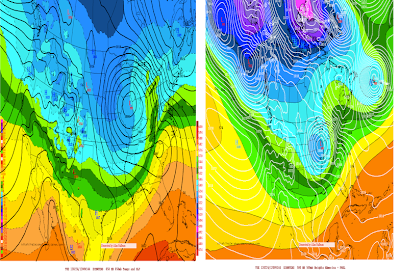 There appears to be potential for yet another winter storm across the nation from February 24th to 27th.

Shown above is a side-by-side comparison of the European ensemble set for Hour 144, or a week away from today. The left side shows 850 millibar temperatures and mean sea level pressure, while the right shows 500 millibar heights and mean sea level pressure. The European ensembles are predicting a pretty strong storm system to hit just south of Chicago, IL at this timeframe, in a solution that would most certainly bring accumulating snow to portions of the Plains and Midwest. A quick background on the European ensembles: They originate from the European model, which is a very accurate model, widely regarded as the best forecasting model in the world at the moment. This means its ensemble set, which is composed of 52 individual members, is also very prestigious. Think about the accuracy of the European model, and multiply it by 52. That's the European ensemble set for you. Additionally, the fact that it is showing such a strong storm this far out means there are individual ensemble members that are much stronger with this system, as these images are a mean of all the members combined. That said, there are also individual ensemble members that are weaker than this mean. Just a little something to keep in mind.

The 500 millibar forecast on the right signals the presence of elongated high pressure across the Eastern Seaboard into the Canadian Maritimes. There is a general lack of pressure anomalies in the Rockies, which concerns me. If you want to map out a storm's track, you want to have at least some signal from the Rockies, as its placement upstream of the Eastern US means it does have a profound influence on what the storm will do. 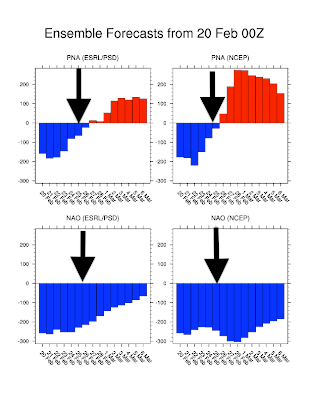 Shown above are two different atmospheric indices, forecasted by two different government weather agencies. The left half of the 4 panel image contains forecasts from the ESRL/PSD forecasting branch, while the right half shows forecasts from the NCEP (essentially the American model and ensembles). The top half shows forecasts for the Pacific North American index (PNA), which I will explain later, and the bottom half shows the North Atlantic Oscillation (NAO), which I will also show later on. I superimposed arrows pointing towards the date of this storm's timeframe. The two agencies generally agree on a slightly negative to neutral PNA. A negative PNA means there are negative height anomalies in the West US (low pressure), thus positive height anomalies must form in the East US (high pressure), as dictated by Newton's Third Law of Motion. The negative PNA discourages the big coastal storms known as Nor'easters, and are typically detrimental to the formation of any big winter storms in the central and East US, save the North Plains. However, as I stated with the European ensembles, there should be very little influence from the PNA at this time, which leaves more influence up to the NAO. Both agencies have the NAO negative during this timeframe. In the negative NAO, high pressure builds over Greenland. In response, the jet stream drops south into either the Central or Northeast US, bringing cold to the region. The negative NAO then enhances the subtropical jet stream, which is basically another jet stream along the Gulf Coast and South US. This is the jet stream that drives the Nor'easters up the coast. As the subtropical jet stream (STJ) is enhanced, high pressure in the East is suppressed, meaning that if there were a solid negative PNA, it would have to fight the negative NAO. Luckily, there will not be a negative NAO this time around.

I'm not saying this storm will happen. But if it did happen, I don't think we would see the storm go into the Midwest. I have a better time believing that the atmosphere will favor a more suppressed storm, possibly something that could affect the East Coast. Again, this is all with a lot of uncertainty, this is just what I'm looking at right now.

Please no questions about snow for your area; it's worthless to ask this far out.