Latest underwater anomalies from the TAO/TRITON agency suggest a building of cooler than normal waters below the surface. This comes as the atmosphere does not react favorably in the presence of an El Nino.

Waters as cool as 2 degrees below normal are being measured approximately 200 meters below the surface, outperforming that of the El Nino, which is being clocked at 1 degree above normal. Common sense says that such an abundance of cool water is suggesting something is happening, whether it is recognized or not. At the moment, I have a fine time believing that these colder waters will rise to the surface and overtake the El Nino to make for a neutral-ENSO winter. This body of cooler waters has been strengthening over the past while, as the El Nino actually takes it down a notch.

For those wondering, if this were a La Nina (NOT saying it is), this would be more east based, borderline central based. However, I am not nearly defining this as a La Nina. It is what it is: a cool body of water below a warm body of water.

This is one of the tricky parts of forecasting: Do you judge a book by its cover, or do you look deeper into what's really going on? I, in an attempt to give you the best information, believe that these cooler waters are weakening the El Nino. I do not anticipate an El Nino to be around by the time January rolls around. I base this on an unfavorable atmospheric response thus far, as well as this new cold body of water that, should it be on the surface, would be classified as a strong La Nina. 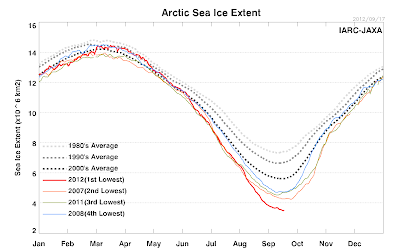 A record low amount of ice in the Arctic could play a big role in how atmospheric blocking may evolve in the upcoming winter.

At the latest observation, ice in the Arctic was down to 3.5 million kilometers(squared). That seems like a lot, and you bet it is. But, when you see that the average for this time of year is hovering around the 5-6 million square kilometer mark, you can see that this is pretty unusual.

The lack of sea ice, in a cause-effect relationship, typically reduces the amount of cold air in the Arctic. The less cold air there is in the Arctic, especially in wintertime, the more negative the Arctic Oscillation tends to be. The Arctic Oscillation favors cold weather in the US when in the negative phase. Now, if the cold air has fled south into our neck of the woods, this means that there is a ridge of high pressure in the Arctic. Should this ridge happen to be close to Greenland, we could also see the North Atlantic Oscillation (NAO) drop into negative territory. This is plausible, considering the two are closely related. In the event the NAO and AO both go into negative territory, the East Coast is in a much better position for big Nor'easters to hit.

This has been proven to possibly be correct, as the NAO has had an unusually prolonged stage of negative values in the past summer, even to this day. The forecasts for the NAO are also still looking fairly negative, further giving life into the possibility that the lack of ice is to blame. Unless we see a rapid build-up of Arctic ice in the next few months, an abundance of cold air in our neck of the woods could very well play out. This, of course, depends on if the other indices in the atmosphere agree.

Andrew
By Andrew at 4:33 PM No comments: