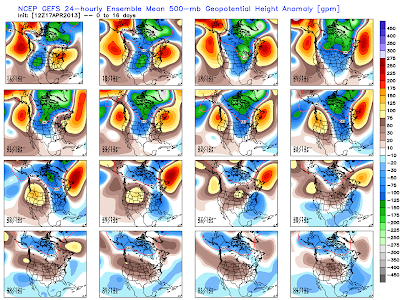 The long range weather pattern is not looking friendly in terms of sustained warm weather.

Shown above is a composite chart of 16 days worth of forecasted 500mb height anomalies from the American GFS Ensembles. The days increase from left to right, top to bottom. The current situation we are in (top left image) includes low pressure in the West and high pressure in the East. This set up allows for warm weather and thus potential for severe weather like we are seeing today and tomorrow. However, over the next week or two, low pressure looks to swing south and east from Canada and the Rocky Mountains to land in the East US. From there, high pressure appears to set up in the West US, and this provides us with the signal that colder temperatures are on the way for many in the central and east US. In the very long range, on the bottom row of images, forecasts show high pressure engulfing the nation from coast to coast. This would support a warmer scenario, but unless we see sustained low pressure in the West US, i'm not willing to buy into a scenario that gives actual springtime temperatures for the East US.

There appears to be growing evidence that tomorrow will hold what is being called a 'Significant severe weather episode' by the Storm Prediction Center, as shown in their most recent discussion:

BOWING SEGMENTS AND EMBEDDED SUPERCELLS WILL
BE FAVORED...ESPECIALLY WITH NRN EXTENT GIVEN THE DEGREE OF SHEAR.
POTENTIAL WILL ALSO EXIST FOR DISCRETE SUPERCELLS DEVELOPING AHEAD
OF THE QLCS AS MLCIN BECOMES MINIMAL. THIS WOULD SEEM TO BE MORE
PREVALENT WITH SRN EXTENT WHERE LARGE-SCALE ASCENT WILL BE
PROGRESSIVELY WEAKER. SWATHS OF WIDESPREAD DAMAGING WINDS APPEAR
PROBABLE ALONG WITH A ROBUST TORNADO RISK /SOME OF WHICH COULD BE
SIGNIFICANT/. 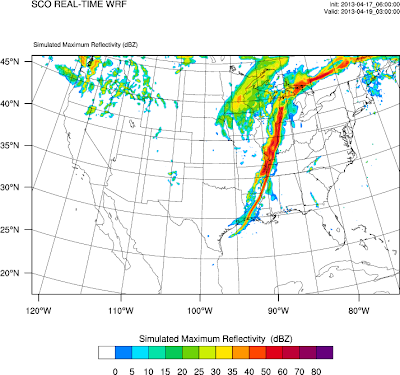 Model guidance suggests squall line formation will commence around noon to 2 PM central time tomorrow afternoon. The squall line is expected to begin in Oklahoma/Kansas/Texas and quickly shift eastward. Further development is expected, first along the southern fringes to cover the Gulf Coast, and then building towards the Great Lakes. This would fall right in line with the Storm Prediction Center's outlook, with a severe squall line building north as the afternoon progresses into evening. Basically anyone in the moderate risk area should expect to bear the brunt of this potentially hazardous squall line. The above image valid for 10 PM central time, shows the squall line still racing east, spanning from one border to another. It's not that often you'll see a squall line with that far a reach.

By Andrew at 4:55 PM No comments: Links to this post