Looking down towards the Himalaya Mountain range, we see there has been a trend of increasing warm temperature anomalies. The mountain range is one of the ideal spots for stratospheric warmings, as air is easily provoked to be forced up and into upper levels of the atmosphere. It was in the past several weeks that we saw a sudden stratospheric warming originate from the very same mountain range. While we are at the end of February and it would take a month to see this warming propagate down to the surface, the stratosphere does not effectively 'shut down' for the winter until well into the spring and into summer. Until then, stratospheric warmings are still on the table.

The EP Flux forecast at the bottom of this multi-panel image will also be on the rise in the next several days. This increase means the stratosphere is becoming more supportive of warming in the stratosphere. Personally, I don't believe we will see another sudden stratospheric warming in the next 10-14 days. However, that increasing warmth in the Himalayas will be something to watch- if it is able to strengthen and detach from that mountain range into the Arctic, we could then see a solid sudden stratospheric warming event. Climatologically, that chance is decreasing by the day, but in weather, anything is possible.

There could very well be a serious threat of damage inflicted on the Florida citrus business and other warm-season economies in the Deep South in coming days.

The forecast above depicts 850 millibar temperatures in light color contours, where below freezing temperatures are north of the thick blue freezing line, and above freezing temperatures to the south of that thick blue line. As you can see, the thick blue line is edging very close to the southern tip of Florida, leaving Jacksonville, Tampa and Orlando in below-freezing temperatures. Light precipitation over the latter two cities could indicate snow - yes, SNOW - would be falling in Florida. This solution has been shown a few times, so the idea of such cold temperatures hitting the state is not entirely out of the realm of possibility. The orange/citrus economy that is based in Florida could be severely damaged if such a solution came true- if snow fell, only time could tell what the impact on the citrus economy would be.

500 millibar analysis reveals that our storm system is currently in the Rockies, and is at the pre-mature stage of a positive tilt. The positive tilt is shown by how the vorticity values (in red outlines) seem to be trying to push to the southwest. In the next 24-48 hours, the system will attain a negative tilt, where the vorticity values will slide east and appear to be pushing to the southeast. In similar fashion to the most recent snow event, this storm will dump intense snowfall on the Plains and occlude (weaken) as it progresses east. 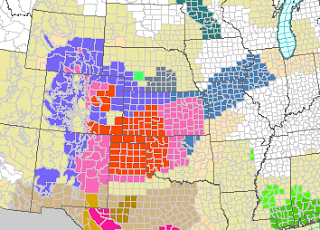 The time for analyzing forecast models has come and gone, as we begin to see swaths of the country stamped with various winter weather headlines. In purple, we see winter weather advisories, which are issued for generally lighter snow events. Pinks show winter storm warnings, and these are the areas that are most likely to see these heavy snowfall amounts in the next couple of days. In an orange-red color we see blizzard warnings, which extend from North Texas and western Oklahoma into southwest Kansas and portions of Colorado to the east of the Front Range. This is where the high-impact blizzard portion of the storm title comes from. These areas will see the worst of this storm in terms of travel impacts and ability to travel.

This is the short range NAM model, an American-based weather model that does fare well in these types of late-winter storm situations. Its forecast for this event holds as much as 31 inches of snow in western Oklahoma in that small red dot. That's nearly three feet of solid snow! The apricot color signifies 24-30 inches, and the light blues reflect 20-24 inches of snow. This is essentially a repeat of what we saw with the most recent snow event: It dumps all of its snow early, occludes and leaves the leftovers for the Midwest and Great Lakes. However, this time, the 'leftovers' may not be so meager. Multiple forecasting sources have informed me that cities like Chicago, IL , Gary, IN and even the region of southern Michigan could be in the running for more accumulating snow than what fell earlier last week. 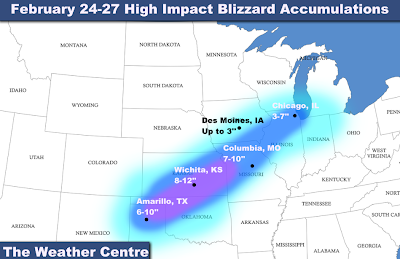 I did put in city forecasts for this event in addition to the coloring scale. Light Blue is a general 1-3 inches, dark blue is 4-8 inches, and light pink is upwards of 8 inches. I used a blend of the NAM model and forecasts from the National Weather Service, as well as my own opinion on the matter. As far as commutes go, I am anticipating an incredibly messy one for Wichita and Amarillo, where blizzard conditions are expected, especially in the latter city. Chicago and Des Moines will really be 'game-time decisions', as upper air thermal profiles are still a little murky and will ultimately determine how much liquid and snow falls over these cities.