Hello everyone, I'm here to present to you the Updated Spring-Summer Tornado forecast.
Already this year, there have been deaths and horrible occurrences of very strong tornadoes. In a very similar situation where fall can determine winter, I believe late winter can determine spring. If this is true, we are in for a very rough ride. 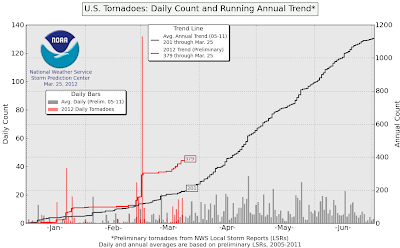 The chart above shows average tornado reports through the first half of the year. Also superimposed are the long range trend for tornadoes as well as 2012's tornado reports. As you can see, the tornado season of 2012 is already way above the average trend, and it's not even April!

I believe that warm weather will continue to flourish this spring and summer and make for above average temperatures. This tells me that a ridge will be in place over the East US. If that happens, storm systems may sweep south through the Southwest and eject into Texas and make for some severe weather. I also see the potential for storm systems to eject into the North Plains and hit the Plains and Midwest with some severe weather when warm air is not overwhelming the country. 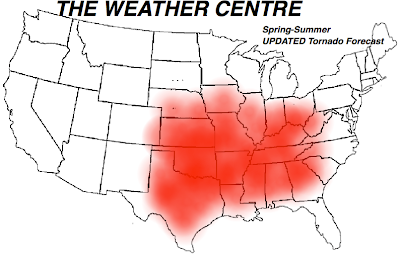 Here's my outlook for the rest of the tornado season. I feel that an already warmer-than normal Gulf of Mexico along with a more active jet stream helped in part with the cool Upper Level Lows that will charge through the Southwest and into the Plains will greatly contribute to a sizable tornado threat, mainly centered in the Southern Plains and into parts of the Ohio Valley and southern Midwest.

The Storm Prediction Center has outlined parts of the Midwest for a slight risk of severe weather today.
The main threat today appears to be damaging wind and hail, but the tornado risk is somewhat elevated and may need to be watched.

This comes as a storm system moves eastward from the Plains and brings with it some warm and humid air. The extent and power of this air appears to be centered in Illinois, Missouri and Iowa.

Here's an image projecting the calibrated potential for a severe thunderstorm, valid around 6-7 pm CDT this evening. If we use this to determine the area of greatest risk, it is quite easy to see that the Illinois/Iowa border is at the greatest risk for severe weather today.