On April 28th, 2014, a supercell moving northeast across northern Mississippi became tornadic, and exhibited multiple signals of a large, violent tornado before it struck Tupelo, MS.

At approximately 2:44 PM Central Time/3:44 PM Eastern Time, radar indicated a supercell with a defined hook echo signature located in the immediate vicinity of Tupelo, as indicated above. This supercell was exhibiting a tornado debris signature (TDS) at the time it struck Tupelo, indicating that a tornado was already on the ground and doing damage. The already-dynamic environment, which later warranted a rare 'High Risk' of severe weather designation by the Storm Prediction Center, provided a sustaining mechanism for this tornadic supercell which eventually did strike Tupelo. 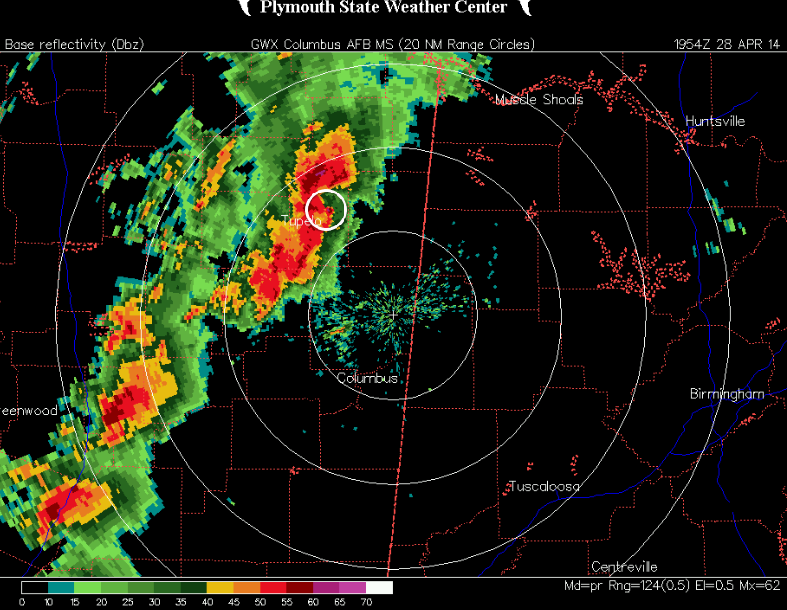 At approximately 2:54 PM Central Time, or 3:54 PM Eastern Time, the supercell had now moved past Tupelo. Radar imagery indicated a much more defined TDS, culminating into the appearance of a debris ball, in which a tornado is present and is throwing debris high up into the air, which then appears on radar. Note that the debris ball is significantly more defined at 3:54 PM in comparison to the previous radar scan at 3:44 PM. This development, combined with further analysis which detailed a more specific track, eventually led to the realization that this tornado had directly hit the city of Tupelo, Mississippi. 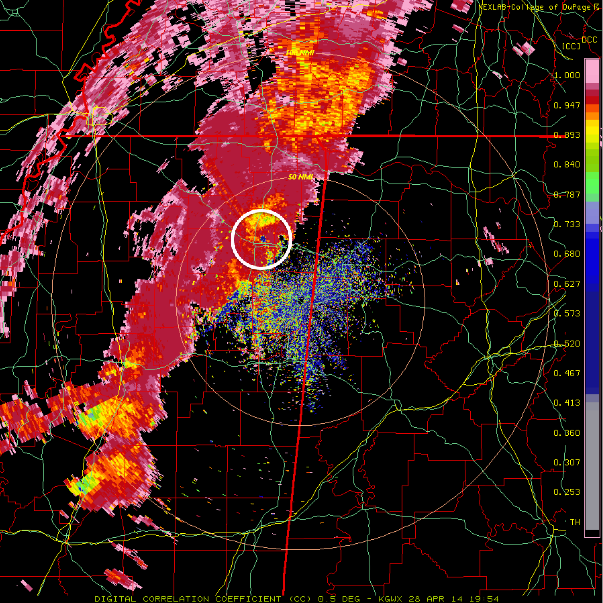 The correlation coefficient, a tool of dual-polarization radar, also indicated the presence of a debris ball. Using two methods of scanning from the radar tower, the radar is able to pick up the likelihood of a debris ball. When looking at a correlation coefficient (CC) chart above, one would want to observe values below 0.800 or so (seen as blues on this chart) to identify a potential debris ball. As this CC image from 3:54 PM ET shows, the debris ball is clearly evident in the white circle, seen as a deep blue dot. This nearly confirmed the possibility that this tornadic supercell had struck Tupelo, producing significant damage.

Additional analyses of other tornadic supercells will be released in coming days.