What Does The Drought Mean For This Winter?

This past summer, there was a massive drought spread across much of the Plains, Midwest and Rockies, at times putting much more than half the country under drought conditions. So, as we approach winter and we see the drought still ongoing in the central and North Plains, the question becomes, what could the drought do for winter?

Less Precipitation
When you have a drought, it means the soil is very dry. When a storm system comes through, it will drop precipitation and moisten up the soil again. However, for drought-stricken areas, this precipitation must fall in a multi-day event for the soil to actually moisten up for good. Because of the dryness of the soil, when storm systems come through, the system will have no moisture to pick up from the soil, meaning that the system can dry up and weaken. It's a very vicious cycle, but unfortunately it does happen. Drought-stricken areas are naturally given a disadvantage right out of the gate when the winter starts.

Warmer Temperatures
Let's go back to the soil moisture issue, but let's say this is a sunny day. High pressure is over the area, but weak enough so clouds can form if provoked. On this day, we'll say that a weak cold front is moving into a drought area. Because clouds form by warm air (and moisture) being lifted off from the near-surface air, soil moisture does become an issue here. In a lack of soil moisture, less clouds form, and thus the sun stays out longer, slightly enhancing temperatures in the day. The lack of clouds at night enables the day's heat to be released back out into space, meaning that temperatures are slightly lower at night.

Those of you in this drought can expect a very slight lowering in precipitation and a very slight raising of temperatures this winter due to the factors I described above. These changes will not nearly be significant, but if you were to break it down into the decimals, you could see a small change.

Andrew
By Andrew at 3:34 PM No comments: Links to this post

What Can Folklore Tell Us About This Winter?

Many of you may remember when I asked two Facebook questions, one asking the anomaly of acorns you had seen in your town, and the other asking if the amount of roadkill you had seen was above or below normal. Why did I ask those questions?

Something that Brett Anthony of KSHB uses is called the 'Acorn Theory'. As this post of his illustrates, the amount of acorns on the ground can help determine the snow amount for the upcoming winter. So, for those of you wondering why there are so many acorns, it could be Mother Nature's way of telling you that a harsh winter is incoming. If there is a below normal amount of acorns, a less cool and snowy winter may be on the way.

As nasty a subject it is, this is actually a legitimate predictor of winter. Let's say you told me that you have been seeing a ton of roadkill. What this means is that the animals are extremely active. Why are they so active? They are preparing for winter. The animals are scurrying around, gathering equipment for winter. Because they're so active, more roadkill is observed. If you are seeing a strikingly low amount of roadkill, the animals aren't too concerned about this winter, and you shouldn't be either- it could very well be warm.

So whether it's acorns or roadkill, there are some tools out there that can help us predict this winter. All you have to do is look.

A wild month of December could be ahead for the East Coast, including the Northeast, Mid-Atlantic and New England, thanks to several factors, but could also be hampered by one big player. Let's jump right in.

This is the forecast for the North Atlantic Oscillation (NAO) in the next several days from the Climate Prediction Center. The NAO involves the presence or lack of a semi-permanent storm system or ridge over Greenland. If that ridge of high pressure is in place over Greenland, this is a negative NAO, which then creates a favorable pattern for cold and storms in the Northeast. The ensemble forecasts from the CPC call for a big dip in the NAO by the start of December. From then onward the NAO becomes a bit more difficult to forecast, as the ensemble members begin to spread out. However, the general idea is for a negative NAO to continue.

This is the forecast for the Arctic Oscillation (AO) in the next couple of weeks from the same ensemble forecasts from the Climate Prediction Center (CPC). The AO's forecast has more of a consensus than the NAO's forecast, which means higher confidence. The ensemble members predict a plummeting AO through the end of November, but also keeps the AO negative through the rest of the forecast period. When you have the AO in the negative phase, the cold air in the Arctic is released south, and temperatures trend on the chillier side for much of the Lower 48.

This is the Pacific North American index (PNA) forecast from the same CPC ensemble members, for the same time period. Note how the PNA has been negative for the last few weeks, and this is thanks to a persistent stormy pattern over the Northeast Pacific, and I will explain more about this next. The PNA forecast ensemble members have the PNA staying negative, but trending more positive in the future. A negative PNA has a warmer pattern over the East, while a positive PNA displays cold and stormy conditions in the East US. 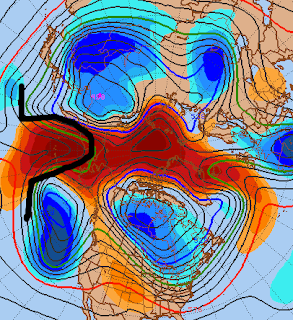 Here is the problem we need to watch. There is something ongoing in the Bering Sea called an 'Omega Block' pattern, where a ridge of high pressure forms in the Bering Sea, with storms on either side. This creates the Greek Omega sign, as I outlined in the image above (and which wxrisk.com was the first to note). Now, this Omega block has encouraged a persistent stormy pattern to develop to the east of the high pressure, which is the base of the negative PNA. So this is a pretty darn stubborn pattern, which has been holding for quite a bit. If we don't see this Omega block get going soon, December could be in trouble.

Let's divert our attention away from the Bering Sea for the moment and look in the upper left hand corner of this image. That area is East Asia, and this forecast for 3 days away shows a strong storm hitting the region. The GFS Ensemble averages (as seen above) have a stormy pattern persisting in the East Asia region for at least a week. Those of you who have followed me for a while know that there is a correlation between East Asia storms and East Coast storms, with a gap between the two of 6-10 days. So, if we see that strong storm in East Asia valid for November 28th, we could see another stormy pattern in the East US from December 4th- December 8th, and possibly beyond if a stormy pattern persists in the East Asian region for a longer time. 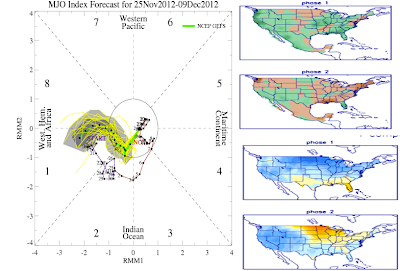 Another factor supporting an intense December is the Madden-Julian Oscillation (MJO). The MJO involves where a stormy pattern is in certain parts of the Bay of Bengal, Pacific Ocean and Atlantic Ocean. These different areas where the stormy pattern could be make up the 8 phases of the MJO. This forecast for the MJO has Phases 8-1 coming on, possibly into Phase 2 if this forecast verifies. The average conditions for temperatures (bottom right images) and precipitation anomalies (top right images) for Phases 1 and 2 are shown, and these two phases generally bring cooler than normal and wetter than normal conditions to the East US. Not so much Phase 2 as Phases 8-1.

So we have a favorable NAO, AO and MJO coming in for the next week or two. I would really like to see that Omega block get out of the Bering Sea as soon as possible. If that block holds steady for the next few weeks, precipitation could be affected, especially for the Ohio Valley, Plains and other similar regions. However, I feel that the negative NAO/AO will be able to squeeze in good shots of cold air in between ridges set up by the Omega Block. 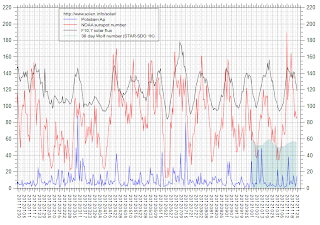 Something interesting that has been found is a negative correlation (Factor 'A' goes positive, so Factor 'B' goes negative) between the 30 day sunspot cycle and the PNA index. So, we are seeing the 30 day sunspot cycle begin to go back down to its negative (as shown in the image above), so it is plausible that we could see this Omega Block start to back off, leading to a slightly better pattern for a positive PNA to develop.