The Lezak Recurring Cycle (LRC) is now beginning to set up as we enter October, and a significant winter storm may be a part of this equation. 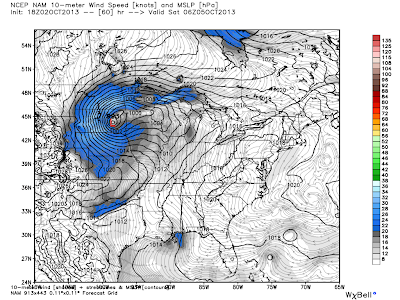 A strong winter storm is projected to develop in the Plains in the next few days, and it is very possible this storm system is factored into the LRC. The whole concept of the LRC is that a recurring pattern develops between October 1 and the middle of November that then repeats for the heavy majority of the following 12 months. Now that we are entering the month of October, it's time to start looking for pieces of the LRC that may cycle in the next ~12 months. One significant piece of the LRC could be this major storm. Considering the storm will happen on October 5th, it's possible we see this storm happen again a few times over the winter.

A few things before the excitement grows: The LRC varies with the storm's strength, precipitation amount and various other factors. This could be a weak storm when it happens again in late-ish November, or it could be strong again. The track could also be relatively different- rather than going through the upper Plains, it might go through the Midwest, or even north into Canada. However, the jet stream drops south each winter, and this should affect the storm track. Just how much it affects the storm track is to be determined. 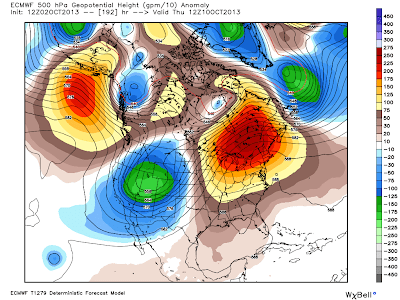 In the long range, the general consensus is that high pressure will dominate the Central and East US, with a very stormy pattern across the Southwest and general West US. This will lead to a period of above normal temperatures for the regions east of the Mississippi River, but this should last for a few days, at most per the latest forecasts. After the ridging begins to weaken and shift away from the East US, model guidance becomes too variable, so we cannot estimate what will happen beyond that. But the point is, already, it looks like this winter will contain some temperature swings, at least for a portion of the LRC.

Andrew
By Andrew at 6:19 PM 5 comments: Links to this post

There is potential for a blizzard to unfold in the Plains between October 4th and October 6th. 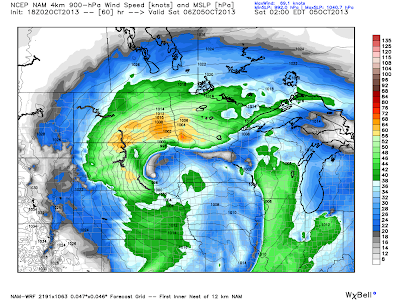 High resolution model guidance supports strengthening of a powerful storm system as it shifts north and east through the Plains. Lower level wind speed is shown as high as 69.1 knots on this map, with the strongest winds bombarding northwest Minnesota and the Dakotas. Sea level pressure contours in South Dakota drop down as low as 992.0 millibars, per the graphic above. With American model guidance showing this scenario consistently over the past 48 hours, it appears a Plains blizzard is certainly a possibility. 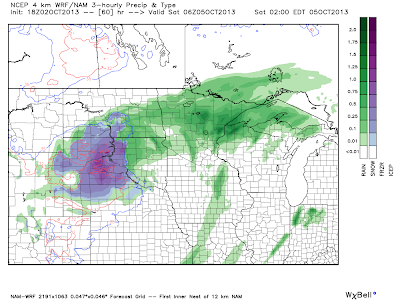 Precipitation type and 3 hour precipitation amounts shown above project the development of a sub-freezing air mass across the western half of South Dakota, leading to very intense snowfall amounts and rates. High resolution guidance indicates there is potential for 10'' of snow in 3 hours (just over 3'' of snow per hour, on average), but considering this hi-res model guidance is notorious for over-estimating snowfall, one should use this map and the one below with caution. 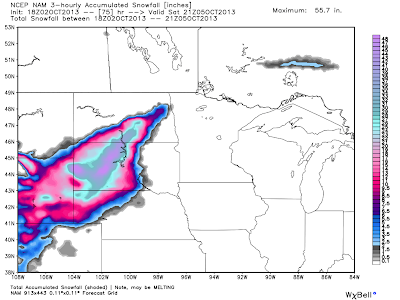 The high resolution NAM model shows incredible amounts of snow across western South Dakota and southern North Dakota. Again, this very well could (and most likely is) be exaggerated, considering the past history of NAM model forecasts. Regardless of its exaggeration bias, the other American model (the GFS) agrees with the projection of significant snowfall, but it has totals in the range of 12-18'' maximum. Model guidances will most likely remain unresolved until the event actually happens, but I project very isolated pockets of 20'' snow totals in western South Dakota, with generalized 12-16'' across western South Dakota.

Andrew
By Andrew at 4:50 PM No comments: Links to this post