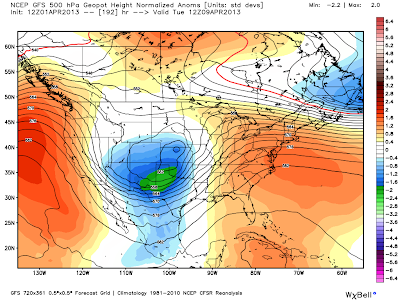 Medium range model guidance is indicating that a storm system will come onshore from the West Coast to kick off the second week of April. As the image above (valid for April 9) reveals, the storm will then travel east and into the Southern Plains. As this happens, high pressure in the East US will be pushed away towards the Atlantic Ocean, leaving warm air spread out east of the Mississippi with nowhere to go. Since spring is around the corner, a good cold front should arrive and could very well bring the first severe weather outbreak of the season. Let's look closer at different factors going into this event. 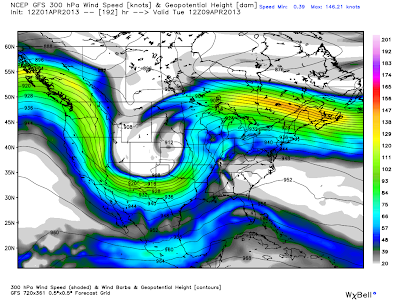 We'll start with the upper layers of the atmosphere and work our way down. Pictured above is the forecasted jet stream position for the same timeframe as the first graphic. We see our storm system clearly outlined by the large dip in the jet stream, beginning to push east. At this particular timeframe, our storm system is beginning to wrap a band of enhanced jet stream winds into its southern flank. This is shown by the darker greens and light yellows found in southern Arizona, New Mexico and Texas. As the storm system pushes to the east, this band of higher winds will also. I anticipate these higher winds to push into Arkansas and into the Gulf Coast/Midwest regions as time goes on. With these strong upper-level winds pushing into the region where the cold front may ignite thunderstorms, the storms could gain a stronger stance if the upper level winds cooperate. 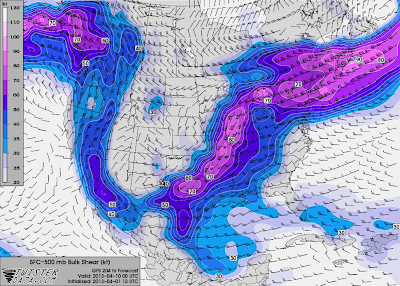 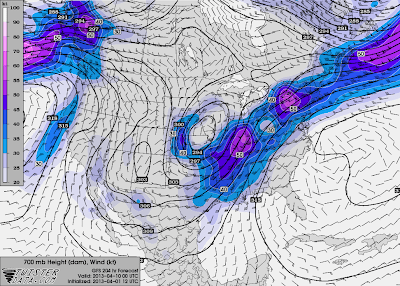 Continuing to work our way down the atmosphere, we arrive at the 700 millibar mark, the area best known for watching the lower level jet stream. The lower level jet stream (LLJ) is the main driver of severe weather when you find out some nasty weather may be headed your way overnight. If you know that the sun heats the Earth during the day to give energy to the storms, you may ask how they can keep going at night. The nocturnal lower level jet stream is your answer. This graphic is for the 700 millibar level, showing projecting winds for the evening of April 9th. We see the strongest winds are centered in southern Illinois, with still-formidable with speeds stretching across Missouri, Arkansas and into eastern Oklahoma. You can see the location of the storm system with the multiple circles in the central Plains, and the location of these high winds to the immediate east of those circles tell me these high winds will be right in the area for thunderstorm formation. These high winds increase my concern that this could be a solid severe weather event, possibly even reaching outbreak level. I will discuss how that outbreak level will become more likely as we keep going. 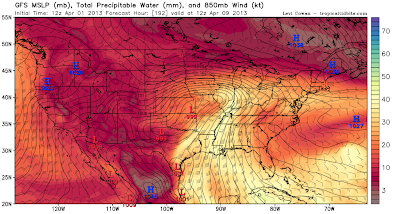 Now shown are projected precipitable water values in millimeters for the morning of April 9th. We see our storm system in the central Plains (denoted with the L) and our precipitable water values in colors. Winds 5,000 feet above the ground are shown in the gray wind barbs. Take a look at what you see:  those pale yellows are high precipitable water (PW) values being drawn directly from the Gulf of Mexico. With abundant moisture being a crucial ingredient in severe weather, this system could certainly have enough moisture to put on a show of severe weather. An analysis of instability maps for this same timeframe reveals enough energy is projected to be present for the season's first real opportunity at a synoptic severe weather event. The wind barbs for 5000 feet above ground are screaming at a maximum 67 knots, meaning the moisture flow will be intense. If this forecast verifies, we will most likely be looking at a good severe weather day for storm chasers.

Natural caveat is we are 8 days away and the forecast will change, but with the pattern looking more active in the long range, this sort of situation could happen more than once!

Andrew
By Andrew at 5:45 PM 5 comments: Links to this post

The overall weather pattern for the United States looks like a solid warm-up is on the way, and with it a more active storm pattern. 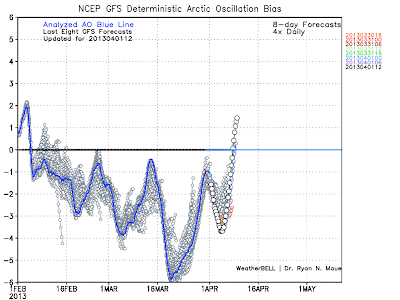 Another index we can look to for temperature guidance is the Madden-Julian Oscillation, or MJO. The MJO involves the location of convection along the equator in the Pacific Ocean. Each phase indicates a different location for this convection, and each phase affects the US differently. For example, when the MJO is in Phases 8-2 in the winter, we can expect cold weather. We see the index moving into Phases 4 and 5 in coming days, as shown above by the European model. These phases in the springtime tend to favor a slightly warm/slightly cool nation, switching back and forth depending on the strength of the phase. We see that the MJO is close to the circle at the center of the image, meaning it will be weak when it enters these phases. Nonetheless, I expect the incoming warm trend to be assisted at least slightly by the MJO. With the MJO in Phases 4 and 5, storms in the West can also become more common, which then forces high pressure formation in the East. This trait usually shows itself in the winter, but could also become present in early mid-spring.

The Climate Prediction Center is on board with this warm-up, predicting over a 60% chance of above normal temperatures across the central and eastern US. The higher the probability, the more likely a strong warm up will occur. With the pattern beginning to favor a stormy West US, it is only logical that we would see a warm and quiet East. This quiet will only last for so long- the storms in the West have to go somewhere. The storm systems beginning to progress east into this warmth then allows us to confront the potential of multiple severe weather events, the first of which is on the horizon and can be seen on the blog.