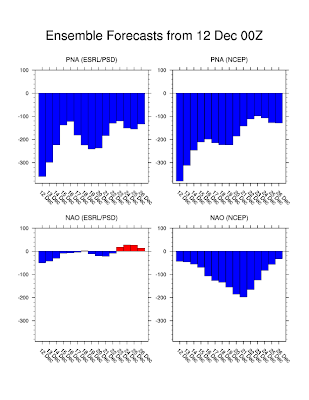 The pattern for the next while is looking much stormier in the near future.

Above is a 4 panel forecast of two teleconnections, the North Atlantic Oscillation (NAO) on the bottom half and the Pacific North American (PNA) index on the top half. The left half forecasts are from the ESRL/PSD, a physics-based branch of the government's weather services, and the right half forecasts are from the NCEP, which gives us the GFS model. If you didn't catch that, here's a breakdown:

The Pacific North American index involves what the atmosphere does in the northeast Pacific and the western coast of North America. When we see a stormy pattern in place over these regions, we call such a pattern a negative PNA, due to the below normal height anomalies in this region. In a similar sense, when high pressure dominates that same region, we call that a positive PNA. A negative PNA will bend the jet stream to give the storms to the Plains and the Deep South regions, frequently initiating high pressure system formations over the Central US. A Positive PNA will bring about an opposite response to high pressure (HP) over the West, and will have the stormy pattern evolve over the East US. These forecasts call for a deep negative PNA, which typically is not that favorable for cold in the East. We'll discuss that prospect later, but keep in mind that negative PNA.
The North Atlantic Oscillation involves the presence of a high pressure system over Greenland (negative NAO) or the presence of a low pressure system over Greenland (positive NAO). In the negative NAO, the jet stream will buckle into the Northeast to allow storms and cold to thrive in that region. The positive NAO denies this region any of these benefits. The ESRL and NCEP are varying on their forecasts, but I have a feeling that the NAO will stay negative, so HP systems caused by the -PNA may be deterred slightly by the -NAO.

This is the Arctic Oscillation (AO) forecast. In its negative phase, you will see high pressure forming over the North Pole, displacing cold air and letting it flow south into North America. The positive phase of the AO brings about a very strong polar vortex (low pressure system that sits on the North Pole), which locks up the cold air in north Canada. Multiple models and ensembles are predicting that the AO will go positive for a while before dropping negative during the second to last week of December, finally trying to push positive in the days leading up to New Year's. There seems to be good agreement among the models, so cold shots are likely to be shooed away in the positive phase and enhanced in the negative phase.

All in all, a negative PNA, weak negative NAO and rollercoaster AO support a much stormier pattern but not a huge potential for a cooldown. Unless we see a sturdy -NAO and -AO, don't expect to see any sustained cold.

There remains potential for a significant winter weather event to occur over some part of the central and eastern US. Let's see what the models are saying. 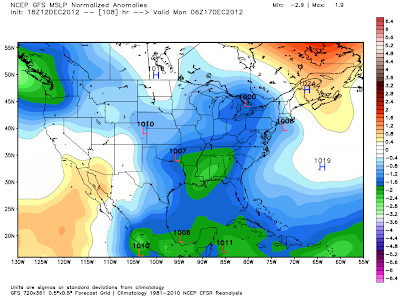 The National Weather Service's GFS model starts out with our system in the early morning hours of December 17th. These images will show sea level pressure (SLP) anomalies, with cool colors showing areas of low pressure, and warmer colors depicting higher pressure areas, hence the terms high and low pressure systems. We can see a nice swath of dark green across the Gulf Coast showing the presence of a storm system. I'll just come out and say it- at this point in time, with a lack of a strong high pressure system immediately offshore the Southeast, it's obvious this system wants to go up the East Coast. 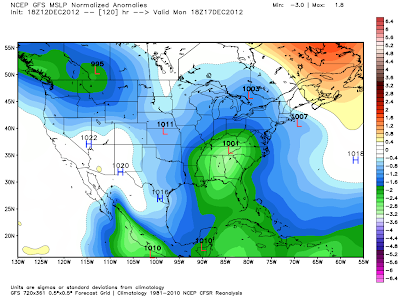 In the afternoon of December 17th, the main storm system has now strengthened, with light green anomalies blossoming across the Southeast. The low pressure system is now apparently in the southern Ohio Valley, or the western Mid Atlantic region. Again, the absence of a high pressure system and a negative NAO (more on that later) make me think that this system will try and slide offshore. 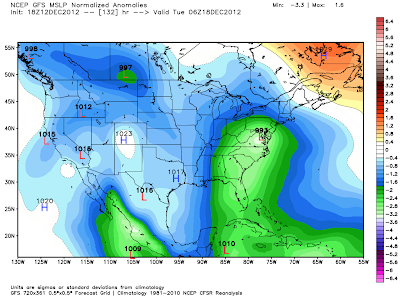 In the early morning hours of December 18th, the Northeast is greeted by a rapidly strengthening system. In a 12 hour period, our storm system has dropped its central pressure from 1001 millibars to 993 millibars- nearly a 10 millibar drop. This is no doubt due to the Atlantic Ocean's influence, something that will work to strengthen the system further as time goes on. 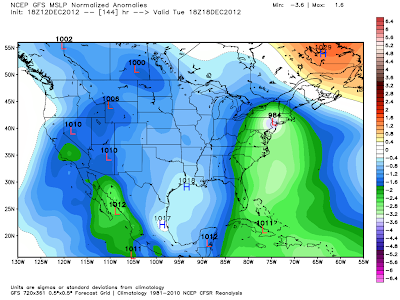 The afternoon of December 18th brings about an even stronger storm system, with a central minimum pressure of 984 millibars. The system is located just onshore. While many of you may jump for joy at the potential of a huge snowstorm, the GFS predicts a small corridor of intense snow well inland, with lighter amounts towards the coast. Immediate inland areas would receive rain.

While I think the GFS is too strong, it has been consistent with a forecast of a storm going up the coast. 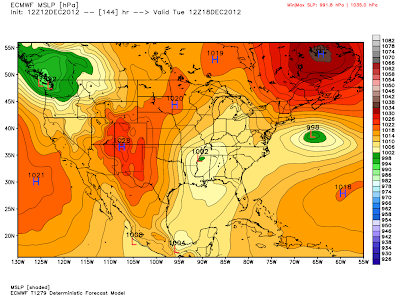 We now take a look at the European's ECMWF model, known to slightly outperform the GFS on a regular basis. The ECMWF, however, has a very similar solution to the GFS, with a storm system originating near the Gulf Coast at a minimum pressure of 1002 millibars. Again, the absence of a big ridge in the Southeast tells me a move offshore and up the coast is possible. 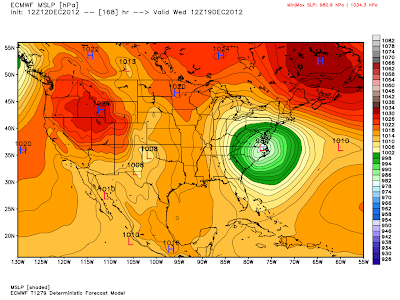 On the morning of December 19th (keep an eye on these timing issues, they could be crucial), we see that the ECMWF has indeed taken this storm towards the coast, and we now see a strong system hitting NC/VA. The tight alignment of isobars near these two states tells me that winds will be strong, regardless of precipitation. I should mention that this looks to be a rain event at this point in time. 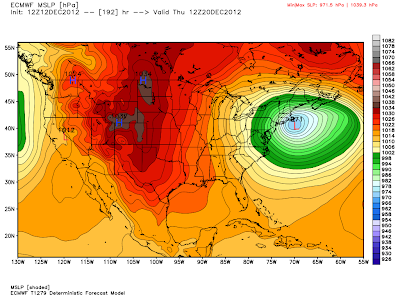 Going ahead further to the morning of December 20th, our storm system has fully bombed out and is immediately offshore the New England area. Very strong winds are predicted across the region. Now, I know what you Northeast folk are thinking: snowstorm. And to that I say: hold on. This system came from the South, which means it is carrying a warm and humid influence with it. That doesn't help snow prospects in the least. But, to see if this is the case, let's see the forecast for 850mb temperatures. 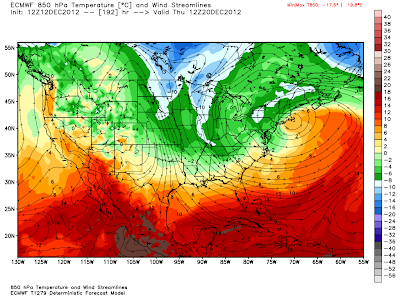 In order to get snow, we want to see 850mb temperatures below 0, or in colors that are not light orange. Personally, I would want to see dark green/light blue to be confident of a snow potential. All we see in New England is dark green and spots of light blue. That's not encouraging to me. I'm not buying this scenario just yet of an all out snow storm in the Northeast. Now, if I were to combine the GFS/ECMWF and make a forecast out of that, yes, there is potential for accumulating snow in the Northeast. However, the next segment explains why I am hesitant to believe such an idea.

This is the ECMWF Ensemble Prediction Center, also known as the ECMWF EPS. Imagine the ECMWF model, but there are 51 different forecasts of the ECMWF, each with its parameters slightly changed to give diversity to the forecast. This image and the next will show the average of these 51 ensemble members. This first forecast, valid the morning of December 18th, sees our system in the Ohio Valley rather than the Gulf Coast. That difference in placement, while it may seem small, is pretty darn significant. This particular scenario would give snow to the Midwest and Ohio Valley rather than just into the Northeast.

24 hours later, the ECMWF EPS sends this storm out into the Atlantic, just offshore of the Mid-Atlantic region. Cold air looks to be sufficient to give snow potential to the Northeast as a whole. If you haven't already guessed, the GFS/ECMWF are at war with the ECMWF EPS to see whose forecast will verify.

Usually, I would side with the ECMWF EPS, but the consistency of the GFS and the new trend in the ECMWF brings me confidence too low to make a call.

Andrew
By Andrew at 5:04 PM 5 comments: Links to this post