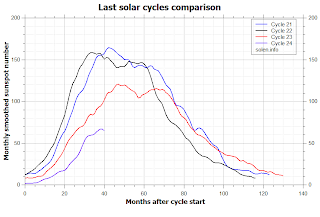 If we use previous cycles to compare to this one, we see that, by this time, Cycles 21 and 22 had already reached their maximum sunspot number for that cycle. Seeing as Cycle 24 is not even close to 100 sunspots at this time, it looks like Cycle 24 will begin to drop back down in the next 6 to 8 months as other cycles have done in the following 12 months from where Cycle 24 is now.

This will have more significant impacts later on, and they will be addressed when the time comes.

Andrew
By Andrew at 4:35 PM No comments: Links to this post

The ECMWF is holding firm with its idea to split the polar vortex in the next 10 days.

This is the 100mb forecast for 240 hours away, or 10 days out. I encircled the newly-split polar vortex in black (they are now called vortices), and highlighted the factor that is making this happen. There is a strong ridge that will be in place over the Bering Sea (which does not bode well for the East US' winter, but is Cloud 9 for skiers in the West) that will break up the polar vortex. It appears that one piece of this vortex will spin south into Canada and the Northern Plains, and the other piece will slide into Russia and eastern Asia.

The polar vortex coming into your backyard is nothing to mess with. It has the name polar vortex for a reason. When the polar vortex comes around, you best prepare for temperatures colder than you've seen this entire season. This vortex is carrying air gathered from Greenland, Siberia and far northern Canada, which means that the air that comes around will have traits of those regions. In summary, it's cold.

This polar vortex split (and subsequent warming) will lead to the Arctic Oscillation dropping negative, which would bring cold air south into the US. However, that cannot fully happen until that Omega block high pressure system in the Bering Sea gets out of there.

Andrew
By Andrew at 4:35 PM 2 comments: Links to this post

This is a post concerning my winter thoughts as of Late November. We'll get things going right away.


The El Nino-Southern Oscillation, or ENSO phenomenon involves the warm or cool anomaly of sea surface temperatures (SST's) over the Equatorial Pacific waters. The top image shows the ENSO anomalies per region, with Nino 1+2 being the furthest east near the coast of South America, and Nino 4 being west of the 180th Meridian. As you can see, Nino regions 4 and 3.4 are pretty warm, actually achieving El Nino state. An El Nino is when these waters are at or above 0.5 degrees above normal. A La Nina has water temperatures at or below -0.5 degrees below normal. Both temperatures are in Celsius. If you now look at the bottom pair of images, you will see the observed SST's and SST anomalies. The warmest waters are centered from 140W to 160E, which does include the Nino 3.4 and Nino 4 regions.

Despite this warming and hinting of an El Nino, I support a Neutral ENSO winter, which is neither an El Nino or La Nina. The neutral ENSO phase can be thought of as if you're taking a shower and the water is room temperature- neither hot nor cold.

This image above is an observed image of the Quasi-Biennial Oscillation, or QBO. The QBO involves wind directions in the upper levels of the troposphere and stratosphere. When the QBO is negative, winds are westerly, or eastward. A positive QBO involves easterly, or westward winds. The Lower 48 is most commonly given colder weather in a negative QBO, as a negative phase of the QBO is able to influence the North Atlantic Oscillation (NAO) into going negative, which only continues to enhance cold potential, especially for the East US.

In the image above, negative anomalies (Negative QBO) is shown in white, while positive QBO values are shown in grays. As you can see, there has been a positive QBO movement from the upper stratosphere recently. When the positive QBO movement progresses down into the troposphere, this occurs at a rate of about 0.6 miles per month. However, the movement has been slowed recently at the 20mb mark. If we look on the right, it shows kilometers. If the QBO descends at 1 km per month, it would take the entire winter to get down towards the 30mb mark.

The line of values above is of the Atlantic Multi-Decadal Oscillation, or AMO. In a positive phase of the AMO, the water temperatures in the far north Atlantic are above normal. This, in turn, enhances the potential for ridges of high pressures to form and sustain themselves over Greenland. This phenomenon is commonly called the negative NAO. In a negative AMO, cold water temperatures are observed, leading to a stormier trend over Greenland, bringing about an increased likelihood for a positive NAO. 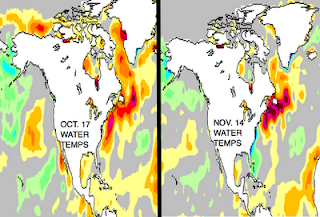 This is a graph showing Northern Hemisphere snow anomalies from October through November of this year. Typically, when October snowfall is above normal, the Arctic Oscillation goes negative the following winter. Likewise, when the snowfall anomalies are below normal, the AO tends to stay above normal in the following winter, meaning warmer than normal temperatures. An analysis of this past October shows a negative anomaly for the first half of October, which means December could be lost to warmth. Considering we already have the Bering Sea under a massive Omega block, such a solution is not out of the question. I expect January into February to favor cold temperatures, with the latter month bringing down the hammer as far as cold weather goes.

All in all, I'm expecting a gradual turn-around from these warm temperatures to cold weather, especially in the latter half of the season. A negative NAO / Negative AO combination will support cold weather and storm action for the Northeast, some of which will be diverted west thanks to an intermittent positive PNA. Winter will hit the best in the Northeast, with the runner-up being the Midwest, Plains and Ohio Valley.

Andrew
By Andrew at 3:30 PM No comments: Links to this post