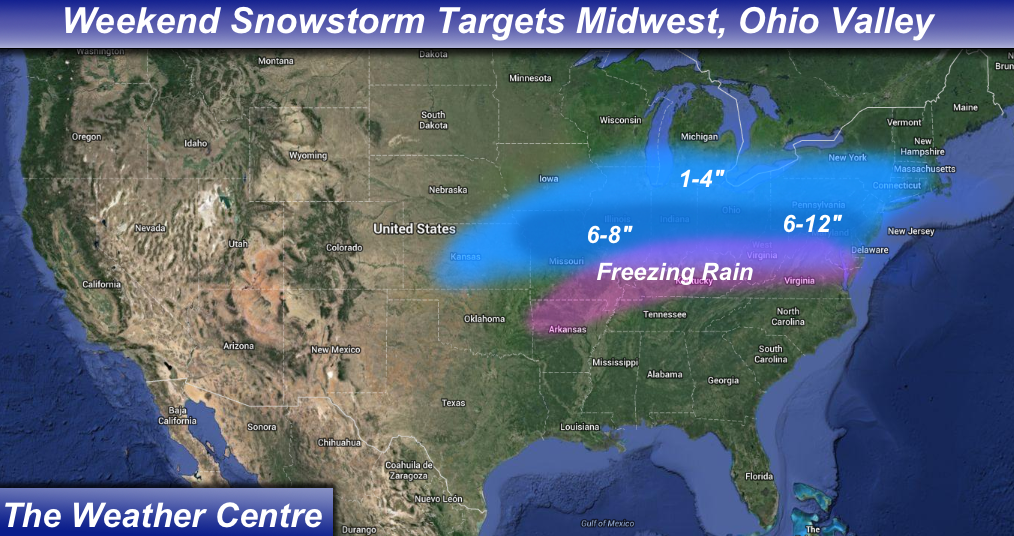 I'm expecting a snowstorm to impact the Midwest, Ohio Valley and East Coast this weekend.

As the graphic above shows, I anticipate the heaviest snow to extend from northern Missouri through Illinois, Indiana, Ohio and into Pennsylvania and New Jersey. West Virginia and Virginia will also be impacted by heavy snow. I anticipate we see amounts somewhere in the 6-8" range over the Midwestern states I just mentioned, while areas along the East Coast have a higher upside, possibly near 12". With this storm comes the threat for freezing rain, and I expect this threat to reside from Arkansas into Kentucky, eastward through the Virginias. Pinpointing the location of freezing rain is difficult, and with model guidance still having numerous issues handling this event, do not be surprised if my forecast chances later today. I based this map off of the 12z GFS, seeing as the system has finally made it ashore and a general forecast with this layout appears to be the consensus at this time.

A look at enhanced water vapor imagery shows the storm system making its way onshore, throwing out massive amounts of moisture ahead of it, as the warmer colors show. The circulation of the storm remains just offshore of California, a bit east of that swath of dry air depicted in dark blues. As the system makes its way onshore, we should see model guidance improve and (hopefully) settle on a solution, as the weather balloons sent up by each National Weather Service office at 6 AM and 6 PM (central time) each day will be able to ingest data from the storm, which then feeds into the models to make a more accurate forecast.

There is some talk about model guidance underdoing precipitation in this storm, and also being too far south. The jet stream is predicted to be aligned in such a way that the storm would normally push further north than it is currently projected to go, and we would typically see the heaviest snow shifted to the north as well. However, with models standing their ground on the storm staying south, and both the northern and southern jet streams now "sampled" by those weather balloons, having been onshore for some time, tells me that the storm will most likely stay on its southern track. The under-doing precipitation claim is a bit more difficult to decipher. On one hand, model guidance is notorious for over-doing precipitation when you compare observed precipitation to forecasted precipitation, but in this scenario, we will have a strong jet stream and Gulf of Mexico moisture feeding into the environment, which would usually help enhance precipitation totals. I want to wait for a bit before making a call on that issue, because it'll most likely take a close analysis of radar trends to determine how model guidance has been handling that aspect of the storm.