The sun is quieting down to the point we could see Maunder Minimum-like sunspot values by 2020. Let's review what's currently going on. 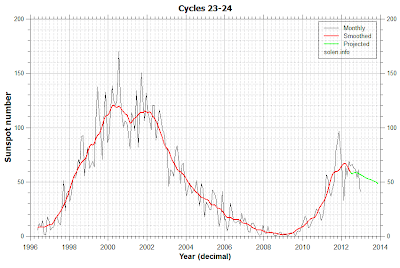 Above, we see a chart of the observed number of sunspots from Cycle 23 and the ongoing Cycle 24. Every roughly 11-12 years, a complete cycle of the sunspots occurs, with an example of such a cycle shown from 1995 to 2006 or something along those lines- starting at the minimum, rising to the maximum, and dropping back to the minimum for the end of the cycle. That was Cycle 23. Looking at where we are now, we may have already reached the maximum number of sunspots for Cycle 24, and that would only be half of what Cycle 23 saw. The green line at the far end of the image is the forecasted sunspot number, and that shows us going back down towards the minimum, meaning 2012 may have held our solar maximum for Cycle 24. 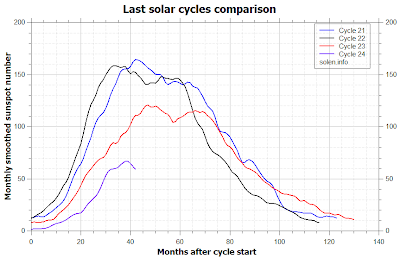 You might think 'Yeah, so the sun's a little quiet. So what?' Well, in the graph shown above, you can see the last 4 solar cycles superimposed onto one graph. Notice how Cycles 21 and 22 were pretty generic, nothing really out of the ordinary. However, by Cycle 23, shown in red, you could notice some changes as far as the anomalously quiet nature of the sun. And now, we are in Cycle 24 and we may have crested for the rest of the cycle. That purple line showing Cycle 24 is nearly a third of what Cycles 21 and 22 were, meaning the sun is indeed entering its much-anticipated hibernation.

But here's the big news- this is only the beginning of what could be a prolonged hibernation of the sun. 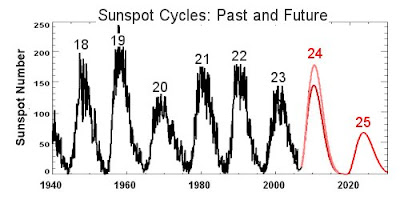 Forecasts from two well-respected solar researchers are shown in the image above, with the pink like displaying the forecast from Mausumi Dikpati, and the red line from NASA solar physicist David Hathaway. Although they both predicted a relatively quiet solar cycle this time around, they drastically overestimated the weakness of this cycle. Essentially, they forecasted Cycle 25 to have low numbers beyond 2020, yet we're seeing those same values today in 2013. This revelation can only mean one thing: the Sun will be even weaker than predicted in 2020.

If you recall, the Maunder Minimum had snow-covered areas in low latitudes year-round, and ice covered many bodies of water year-round as a result of such a low period of sun activity. If the forecasts are correct, we could see sunspot values struggling to surpass the double digit mark, and that would induce potential Maunder Minimum-like effects. Time will tell, but this is certainly a very ominous sign from the sun that must be watched closely.

Andrew
By Andrew at 1:41 PM 7 comments: Links to this post 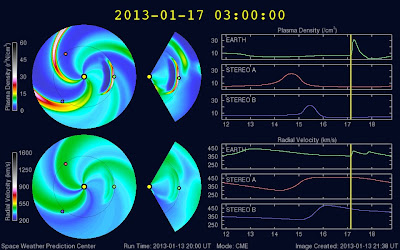 A coronal mass ejection, or CME, appears to be likely to hit Earth in the next several days.

The image displayed here shows the solar wind forecast for the late hours of January 16th. If we look at the top left set of images, we see a small but intense band of colors just beginning to hit a small green circle. That green circle is Earth, and that small band of colors is a coronal mass ejection (CME). When the sun gets 'agitated', it puts out a burst of energy that can fly in any direction. Some happen to put Earth in the line of fire, and this is one of those times.

If this happens, radio transmissions may be disrupted, some airplanes may see slight communication difficulties, but unless this event becomes major in the next model forecast, this will not be a significant event.

Andrew
By Andrew at 1:41 PM No comments: Links to this post 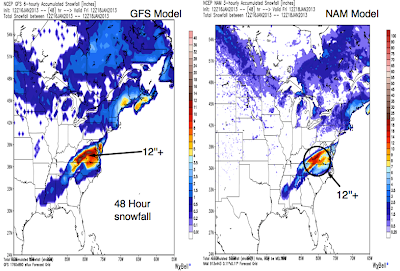 Significant accumulating snowfall looks probable in parts of the Mid-Atlantic over the next 48 hours, with two reputed models supporting accumulations surpassing one foot.

The image shown depicts the GFS model on the left and NAM model on the right, images courtesy of Weatherbell. The models are forecasting accumulated snowfall to reach significant amounts in parts of the Mid-Atlantic. The GFS believes much of Virginia will experience the brunt of this snowfall, with east Kentucky and east Tennessee getting in on the snowy fun. As far as the NAM model goes, a wide swath of snow appears forecasted across all of Virginia, especially in the western part of the states. Southern West Virginia is also primed for accumulating snowfall in the NAM's scenario, with KY and TN finding themselves with shovel-able snow.

Here is my snow day forecast for January 18: 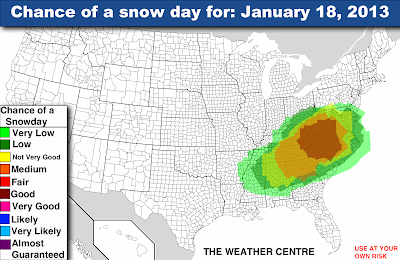