Preword: The title phrase '...Follow in the footsteps of Superstorm Sandy' only refers to how the superstorm evolved, not how it was a hurricane, etc.

On the heels of Sandy, a powerful Nor'easter is expected to brew in the days following the election- and this one will evolve the way Superstorm Sandy did.

This is the 6 day forecast of 850mb temperatures and MSLP (pressure) lines across the United States. Note there are two factors in this situation: an already-developing coastal system, and a fairly 'good' Canadian storm system. The coastal storm is moving to the northeast, hugging the coast, while the Canadian system appears to be wanting to move southeast.

This is where things get interesting.

A mere 24 hours later, a strong storm system has formed immediately inland of the same cities that were most devastated by Superstorm Sandy, with cold air behind it and warm air in front. If you can't already tell, this is, in some ways, a Superstorm Sandy replica, and here's how.

•Both Sandy and this Nor'easter did/will develop by phasing (merging) of two storm systems.
•A cold Canadian air mass will be sucked into the new strong coastal storm, much like Superstorm Sandy.
•This sets the stage for heavy precipitation in many of the same areas as Sandy, with a possible snow event ongoing in Pennsylvania and West Virginia.

The only thing that will not be the same is the strength, a key difference. Sandy was a hurricane up until landfall. This system will be just a regular Nor'easter. That said, winds will be dramatically lower, and precipitation will likely not be training (precipitation moving over one area over and over again, like a train on one spot of track) as much as we saw with Sandy.

This will, however, continue to hamper residents of the Northeast whose lives have been forever changed by Sandy. I will follow this storm daily to keep you up to date on what could happen.

The latest runs (yes, plural) of the GFS model are showing a strong storm system making landfall on the West Coast in mid-November, when winds at the 500mb level (commonly used to identify areas of high/low pressure) surpass 80 knots- a benchmark for the 'strong' storm system line, in my opinion. Usually, such long range forecasts are worth next to nothing to me. But here's the thing:

I believe this forecast.

This is the 500mb map from August 21st of this year. Note how there is also a strong low pressure system in the Ohio Valley and another one just off the West Coast. Also observe the presence of a high pressure system (shown by arcing lines in the Rockies) out West. If we compare this to the November 9th forecast, we see a striking similarity. The forecast also holds a disturbance in the Northeast and a strong system on the West Coast. Adding to the similarities is the presence of a ridge in the Central US. This is what we call the Lezak Recurring Cycle, and those of you who have followed me for a while know what I am talking about. Here's the low down of the LRC:

•A 40-60 day pattern that sets up every year in the fall.
•This pattern continues thru winter, and is never the same from year to year.
•Every 40-60 days, a 'cycle', or repetition, occurs.
•Because the LRC involves disturbances and ridges, each cycle means that the same piece of energy or high pressure system would come around again 40-60 days later, in the general same area.

The LRC is hard at work. Now, we can apply the LRC to the rest of winter and see what'll happen. I'll have more details on this tomorrow.

Andrew
By Andrew at 5:08 PM 2 comments: Links to this post

What Are The Models Saying This Winter? Part 3

Yes, you guessed it. Another sequel to show you what the models are thinking for this upcoming winter. If you want to keep these coming (I have several other models), comment below and tell me so! Let's get right into the models. 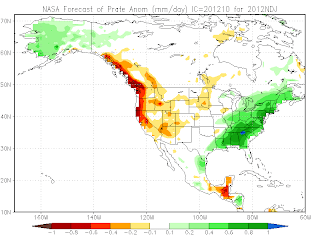 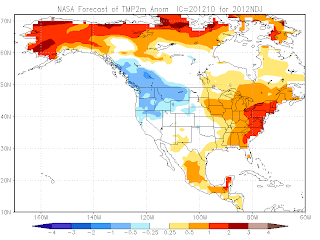 This is the precipitation (top) and temperature (bottom) forecast for this winter off the NASA model, a model run by the folks at NASA. This model is showing a very wet East Coast and Southeast, as well as above normal precipitation anomalies in Alaska. However, for the Northwest and northern Plains, a drier scenario is waiting. As for temperature, a warmer than normal airmass is being forecasted across Alaska and northern Canada. In the Lower 48, another warm air mass controls the East Coast and Midwest into the Southeast. The Northwest, however, gets a chill for the winter.

This forecast is puzzling. I'm seeing an above normal temperature anomaly in the northern reaches of Canada. Typically, this can indicate a negative Arctic Oscillation, or AO. This negative AO helps to bring cold air south into the nation. However, the NASA model prefers a warm East Coast. While this is completely possible, the overall scenario seems a little "off" to me. Also, the NASA model is not known for its verification, which isn't the best. That said, I don't think I want to side with this model at the moment. 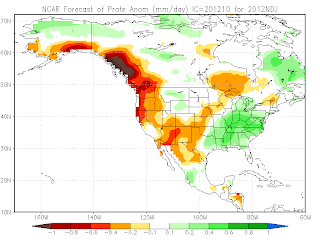 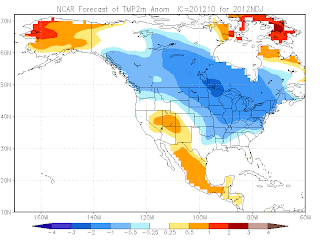 This next model's precipitation (top) and temperature (bottom) forecasts are from the NCAR long range model, developed at the NCAR facility. This model is also not known for being the best when it comes to its forecasts verifying, but the NCAR long range model may have some sense in this forecast. I want to start in the temperature department, where above normal temperatures are displayed in Alaska and the Greenland region. The above normal temperatures in Alaska would lead to a likely ridge in the area, which provokes cold air to be sent south. This could be encouraged by warm northern Atlantic waters (possibly a negative NAO pattern), which leads us to the NCAR's forecast of well below normal temperatures in much of the nation. In the precipitation department, a very dry Alaska (symptom of ridging) and West Coast are observed. This dry spell extends into the Plains, although much of the East US is well above normal for precipitation. The factors working together spell out a pretty logical forecast. If this were to verify, I can't say I would be surprised. I do support some portions of this forecast, mainly the temperature forecast.

Look for more 'What Are The Models Saying This Winter?' posts in coming days!

Andrew
By Andrew at 4:36 PM 3 comments: Links to this post