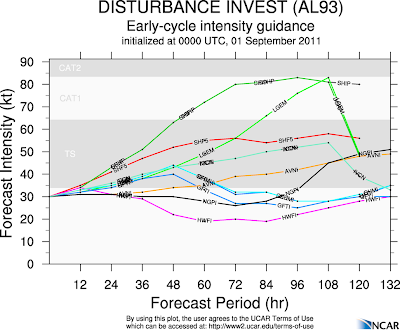 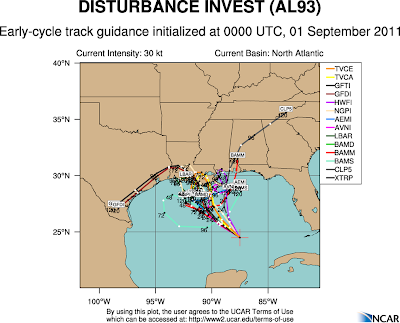 By Andrew at 9:03 PM No comments: Links to this post

Here's a cool video from a GOES satellite that watched Irene come onto the East Coast.

By Andrew at 8:39 PM No comments: Links to this post

Invest 93L's development chances upped to 60% in Gulf of Mexico

The chances of Invest 93L developing into a depression, storm or hurricane in the next 48 hours have increased to 60%, and that number is expected to climb rather quickly at some point soon as upper level winds become more favorable. As soon as that happens, we can expect that we will have 'Lee' on our hands in the Gulf of Mexico. Here's the latest update from the NHC.

We also have some early updates as of 8:00 pm EDT this evening on the invest, and here they are.

By Andrew at 8:23 PM No comments: Links to this post

Hello everyone. You are probably expecting an update of the ECMWF model, but we're going to take a look at surface observations and that kind of stuff. First off we have microwave imagery of Katia

Basically, it shows the coldest cloud tops (most intense convection) in the storm, as well as a generalized view of the center of circulation.
This won't be a long discussion, so here's the ensembles take on Katia. 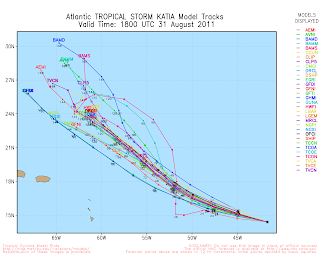 By Andrew at 4:06 PM No comments: Links to this post 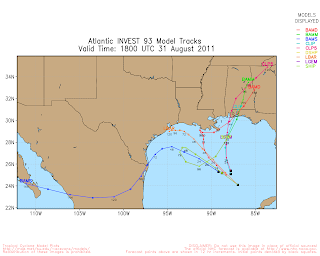 Ensembles are showing Lee has a wide variety of options. The models are not handling this invest well at this time. However, at this time, it is believed that the two main options are south into Mexico, or northeast into Mississippi and Alabama. There is still the other two options on the table, but these are based on consensus and thoughts of other meteorologists.
There is still a lot of time before Lee could develop, and we will keep you informed throughout.
By Andrew at 3:53 PM No comments: Links to this post

Email ThisBlogThis!Share to TwitterShare to FacebookShare to Pinterest
Related: Invest 93L
We do not have data yet on the latest 12z ECMWF model or any 12z model for that matter. Next update will be at 330 this afternoon.
By Andrew at 11:07 AM No comments: Links to this post

The National Weather Service will be rolling out a new design on its NWS homepage (See Figure 1) and Local Forecast Pages (See Figure 2). You can click here for the full press release, and click here to publish comments to the NWS about the new design.

A big development has occurred this morning, folks. After checking the 0z ECMWF, I did an unusual thing and put the ECMWF up against four other models: the GFS, HWRF, GDFL, GEM models. It turns out the ECMWF is the farthest north out of all 5 of the models put together. This is a significant development because it means some models could be calling for an East Coast run.
Here's the multi-model panel 126 hours out- just on the edge of the 5 day forecast. 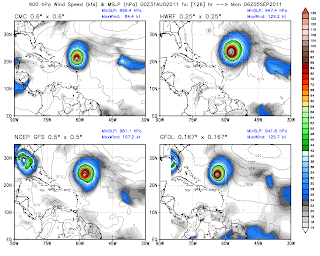 You can differentiate which models are which by looking at the image headers. You can see maximum wind speed in that same area as well. Here's a piece of information. There are some biases on these models. I only know one or two, and here they are.
-HWRF is stronger than what actually pans out.
Yes, the HWRF is pretty much always stronger in tropical cyclones than what happens, so don't take strength forecasts too seriously. Now compare the 4 panel image to the 0z ECMWF of this morning. 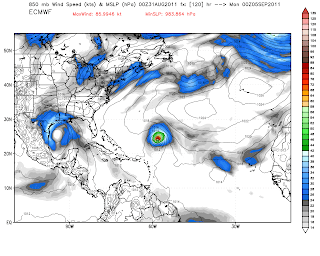 Check out how far north the ECMWF is compared to the other models. This presents a problem to forecasters- which model suite should I choose? There's a majority of somewhat reliable models, up against  a heavy hitter model in the computer model world. Right now, we are not going to choose, but will watch all models carefully over the next couple days.

There is a rumor that Katia's models will have a change coming in the next 2 days as a typhoon will move over Japan.
By Andrew at 6:15 AM 2 comments: Links to this post