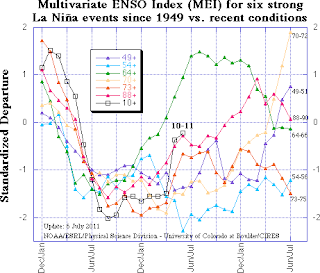 Stay tuned for the next update (by August 6th, or earlier) to see where the MEI will be heading next. La Niña conditions have at least briefly expired in the MEI sense, making ENSO-neutral conditions the safest bet for the next few months. However, a relapse into La Niña conditions is not at all off the table, based on the reasoning I gave in September 2010 - big La Niña events have a strong tendency to re-emerge after 'taking time off' during northern hemispheric summer, as last seen in 2008. I believe the odds for this are still better than 50/50.

The MEI (Multivariate ENSO Index) is an agency that monitors ENSO conditions. The above paragraph is a small portion of what it has published for the June update.
The MEI will be updating again this month soon, and when it does we will be posting the update.
The reason I have posted this is to recognize the fact that there is scientific evidence by respected scientific officials for a chance of a strong La Nina re-occurring after settling down for the summer.
You can see other 2011-2012 winter forecast posts on the right sidebar.
http://www.esrl.noaa.gov/psd/enso/mei/
By Andrew at 6:44 PM No comments: Links to this post

I apologize for such short discussions, but I need so regain my energy. For some reason I am very tired in the last week.
You can go to http://www.nhc.noaa.gov/index.shtml?epac for more information on Calvin.
By Andrew at 6:13 PM No comments: Links to this post

Thanks to extensive research by a fellow weather enthusiast, it has been determined that the winter of 2011-2012 appears to have probabilities of being similar to the winter of 1995-1996. 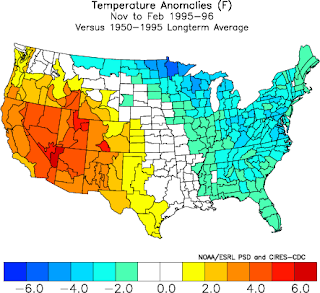 Precipitation anomalies for Nov.-Feb. 1995-1996 with regards to long term averages 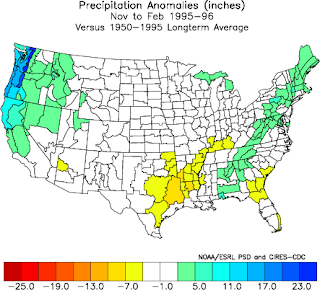 While unfortunately we cannot superimpose these images together, we are able to determine that the west wing of the US should be warmer than average, with the east portion of the US to be cooler than average, including all of the Great Lakes. The Central Plains could be at an average.
Precipitation wise, a strip of lower precipitation amounts existed from West Kentucky and through Arkansas into Texas. The West Coast was very wet in the winter of 1995-1996, while the Northeast and portions of the Southeast were slightly above average in precipitation.

While details are impossible to figure out this far out, we will provide more data as we receive it. Look on the right sidebar and click '2011-2012 Winter Forecast' tag for all posts regarding that topic.
By Andrew at 11:55 AM No comments: Links to this post