This post will address the current situation of the model guidance, as well as what I think will be happening.

The ECMWF model, which previously dumped a wide plethora of snow in excess of one foot across the Lower Great Lakes, suddenly flipped over to the GFS' solution in an unexpected turn of events. The European model had been forecasting this solution for five consecutive runs until this afternoon, when it decided to take the snows further north in accordance with shifting the low pressure system itself further north. The GFS and GGEM had also taken this system further north with today's afternoon runs, meaning a consensus appears to be forming.

I have a few thoughts on this. For one, with a storm this strong, a northern shift to the storm was bound to occur, though one could argue it was made a while ago when the GFS came north after making its far-south forecast a few days ago. Strong storms naturally have the tendency to overachieve to the north, so to say, in that models may underestimate the northward motion of the storm. I find that to be a very plausible scenario, and it is possible this ends up being the final track to the storm.

Another possibility with this system is that it is not being handled correctly. This would arise due to the lack of this system being in the United States, where the radiosonde (instruments attached to the big weather balloons) can collect crucial data that then goes into the models, and enhances their forecast's credibility. Our system is not in the US yet- it is currently skirting the west coast of Canada. It is possible that the track will change again over the next 24-48 hours before it finally comes ashore. When it does come ashore, expect to see a model consensus quickly materialize, whether it be the one depicted above by the ECMWF, or a further south one. 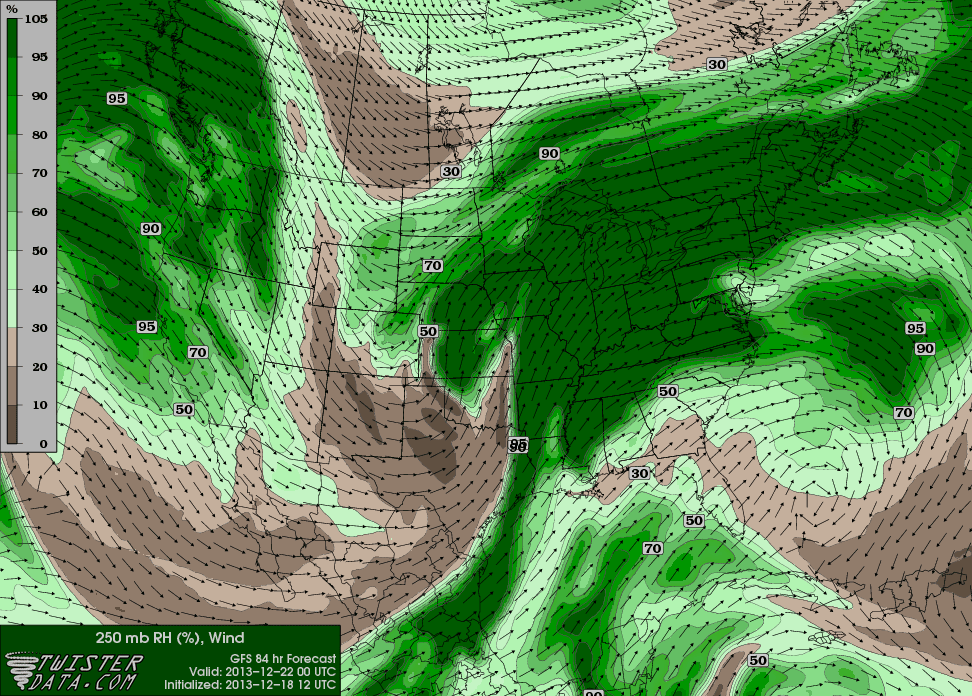 One thing is for sure, however- this storm will be hauling loads of moisture northward. As the relative humidity forecast chart from the GFS shows, there will be immense amounts of moisture being pulled north for this storm. Regardless of where the storm ends up tracking, chances are good that someone will receive significant snow, while others receive a significant ice storm, and still others get flooding rains. This system will be one of the more powerful ones we have seen in recent years, and its impacts will not be as weak as some modeling systems have previously been predicting them to be.

Here's my last thought: I believe a southward shift is in the picture for this storm yet again. Why? Taking a look at model bias' yet again, as I have throughout this system, it was determined by the NCEP that energy in the Gulf of Alaska moves too slow across all models. Additionally, models have issues in not moving Arctic air and Arctic cold fronts south quickly enough to the east of the Rockies. Considering these two model bias', I do think there is wiggle room for another shift southward, and would not be surprised to see such a shift unfold. If we did see the energy in the Gulf of Alaska move faster than it is projected to (considered at this time to be a possibility), the system could very well return to what the ECMWF had previously been showing in terms of track, and possibly heavy snow as well. I'm not completely confident in these ensembles, so the chance of this happening is consequentially in question.

I would watch out for a southward model correction in future runs, in the event that we see the energy along the Canadian coast actually move faster than it is projected to. At the same time, however, the longer this new model consensus goes on for, the better chance it has of working out.

I'm not confident enough to release a second outlook, but here's a summary of my thoughts.
-We are looking at a significant storm system hitting a large part of the nation.
-A significant snow, ice and rain event is possible/probable with this storm system.
-There is potential for models to correct southward once again, though the degree of correction and probability of said correction is unknown at this time.