I am still monitoring the potential for a period of active weather in mid-June. 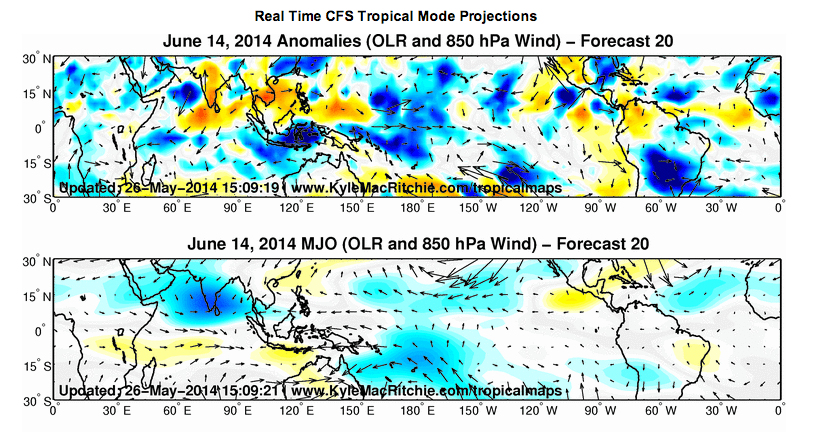 The image above shows a long range forecast of outgoing longwave radiation (OLR) anomalies over the equatorial region of the globe, valid on June 14th. In both of these images, the yellows represent positive OLR, or suppressed tropical convection, while the blues denote negative OLR, or enhanced tropical convection. We can see a strong active Madden-Julian Oscillation (MJO) signal on the bottom panel, with deep blues indicating abnormal convection occurring over southern India into the waters east of the subcontinent. The placement of this enhanced convection tells me we are looking at a Phase 2 MJO, as the OLR composite shows below.

Now, outside of the fact that Phase 2 MJO events have been known to increase the risk of violent tornado outbreaks in the spring months, the mid-level pattern during a June Phase 2 MJO event also signals the potential for severe weather.

The image above, produced by Americanwx, shows 500mb height anomalies over the northern hemisphere when the Madden-Julian Oscillation is in Phase 2 during the month of June. In this image, warm colors indicate high pressure/calm and warm weather, while cool colors denote stormy and cooler weather. During a typical MJO Phase 2 event in June, we tend to see ridging set up from the Bering Sea to the Great Lakes, enhanced slightly by weak troughing in the West. Because of this weak West US troughing, warmth and moisture are pumped north into the Central and East US from the Gulf of Mexico. This action then feeds into the increased potential for severe weather. Based on this composite, I do feel this time period may be defined by some active severe weather.

More evidence for an active severe weather period in mid-June arises when we take a look at the long range CFS severe weather forecast. The dates on the right display the date the forecast was made on, and the dates on the bottom legend indicate when this forecast is valid for. Warmer colors indicate the higher potential for severe weather. For instance, if I want to know the severe weather potential for May 30th on a forecast made on May 5th, I go up the legend on the left to find May 5th, then scroll on the corresponding horizontal line to find the May 30th box. In this case, we have been seeing the majority of recent forecasts highlighting the June 10-25 period as the one to watch out for, as the varying-colored boxes show on the upper-right corner of this image. Sometimes, there is safety in numbers in the weather world. In this case, with the relative consistency of these forecasts for the mid-June timeframe, I feel comfortable raising the concern of a potential active period for the aforementioned timeframe.

Andrew
By Andrew at 2:55 PM 4 comments: Links to this post