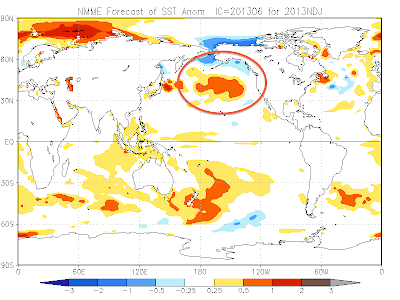 The Negative phase of the Pacific Decadal Oscillation (PDO) appears likely as we head into this winter.

Shown above is an average of multiple globally-produced forecast models, showing sea surface temperature anomalies for November-December-January of 2013-2014. The circled area shows the trademark presence of the negative PDO- we see a body of above normal sea surface temperatures in the northeast Pacific, surrounded by below normal sea surface temperatures in the waters immediately offshore the coasts of western Canada and southern Alaska. While this covers two of the three big winter months, the PDO is called the Pacific Decadal Oscillation for a reason. We have been in the negative phase of the PDO for a while, and even without looking at this model suite, there is a decent probability that we will be in a negative PDO this winter. 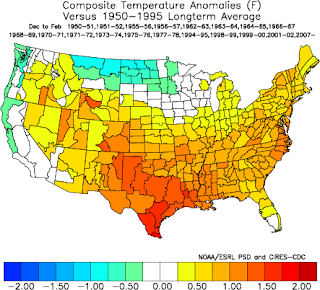 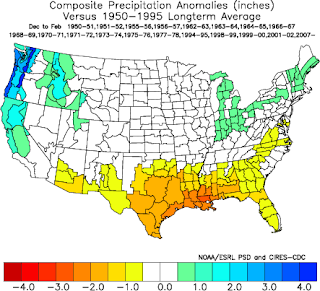 For precipitation, the negative PDO brings about a decidedly below normal trend in the Gulf Coast region and into the Southeast. While the severe drought observed just a year or two ago in the southern Plains has been alleviated to some point, it would only take one more winter of below normal precipitation to bring back some effects of that drought. Again, I cannot emphasize enough the fact that the PDO does not decide the entire seasonal trend- many other large and smaller-scale variables go into a seasonal weather pattern.