My ideas for a cold January are evolving as expected, with the latest CFS v2 weekly forecasts calling for an outright obliteration of the Arctic floodgates in the 1st to 2nd weeks of January, as pictured above.

Siberia's snowfall, which has a correlation with temperatures in the US during the winter, was below normal in the first half of October. This would call for a warm December and possibly first half of January. As we have already determined, December is lost as for persistent cold and snow. However, as I have been calling for, this winter will be backloaded, with the most cold and snow hitting in January and February. 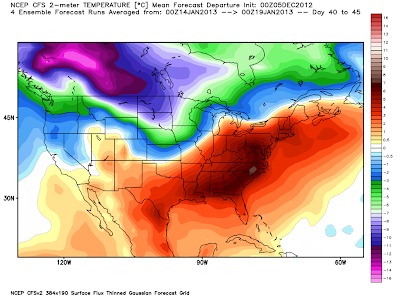 This CFS v2 weekly forecast for the 3rd week of January shows yet another strong cold outbreak infiltrating the Lower 48 after a brief warm-up. Again, we can see Siberia's October snow cover fitting in here. Siberia did moderate in the middle of October, which would affect January. What I expect based on my findings in Siberia is that cold outbreaks will become stronger in January with each storm that passes through. Periodic warm-ups are inevitable, but cold outbreaks will become more persistent, long-lasting and stronger.

We're still a month away, so this is nowhere near written in stone. However, if Siberia does take hold, cold weather would be expected in the month of January.

This is an article concerning the potential for a major winter storm between December 10 and 12. Let's get right into it.

We'll start off with the American GFS model, run by the National Weather Service. This is the 0z model run, meaning it was run at 12z today, or 6:00 AM central time this morning. The GFS model begins its forecast for the storm by having the system moving into southwest Missouri as a weak storm system above the 1000mb mark. Precipitation is widespread north of the blue line, and this blue line is the difference between rain (south of the line) and snow (north of the line). The 12z GFS essentially gives a nice snow event to the states of Kansas and Nebraska at this forecast, which is valid for the afternoon of December 9th. There is also some light precipitation to the north and northeast in response to the advection (movement) of a warm air mass against a colder one.

12 hours later, we are now at the forecast for the early morning hours of December 10th. We see that our system has now moved northeast and has strengthened, with its pressure dropping to 998 millibars, a nice drop from 12 hours ago. Precipitation remains widespread north of the rain/snow line, with Michigan, Iowa, Wisconsin and Illinois getting the brunt of the potential snow. Illinois looks to be in the dicey area as far as precipitation type, as we see the rain/snow line is cutting into te heaviest precipitation to the north of the storm system, meaning possible snow totals could be cut down. I would like to see other models' interpretations of how far the warm air will advect north before I make a decision on if I agree with this forecast.

6 hours later, we arrive in the morning hours of December 10th. It's not the very early morning, just around 6:00 am central time. The system in question has now dropped its minimum central pressure to 994 millibars, indicating a continuation of strengthening within the system. Some backside snow looks to be ongoing in Illinois, Wisconsin and Michigan, with the main event now in southern Canada. A squall line could be forming across the Southeast, based on fairly heavy rain totals in a linear formation. This would not surprise me, as this is a very cold air mass moving south in the wake of this storm system.

This is the Canadian's CMC model forecast, sometimes referred to as the GEM model or the GGEM model. This is hour 114 from last night's 0z (6:00 PM) model run, and the forecast hour puts us in the afternoon of December 9th. The CMC model is forecasting a pretty hefty snow event across much of the Plains, with some of the precipitation associated with this system, and other precipitation associated with another system on the US/Canada border near Minnesota. If this solution were to pan out, several inches of snow could fall in Iowa, Minnesota, Nebraska and Colorado before this system even gets itself out into the Midwest.

We've now moved forward 12 hours, and our disturbance has made its way towards the Midwest. But hang on- is that TWO low pressure systems I'm seeing?? Yes. The CMC model has split our system into two separate systems. This is probably a good time to tell you that the CMC is rarely known as the most reliable model in the weather world, and this solution only enhances such an idea. Anyhow, the CMC model still delivers heavy snow to Iowa, Wisconsin, Minnesota, Nebraska and Kansas, and this solution could bring the first three states several more inches of snow.

This is where the CMC model takes a turn for the weird. The model rejoins the two low pressure systems into one 995 millibar system. As it does this, the CMC model guides the disturbance into Indiana with a very heavy rain mass in tow, possibly an intense squall line. Light snow is now ongoing across Wisconsin, Iowa and Missouri, with heavy rain for all locations south of the blue rain/snow line.

So we've established that the GFS model has a fair idea for its forecast, while the CMC model is doing its own weird thing. Let's keep moving.

Now we move on to the Navy's NOGAPS model. Again, as a forewarning, the NOGAPS model is also known as one of the less reliable models, and tends to print out solutions that sometimes make sense and sometimes leave me scratching my head, saying 'What did I just see?' This is the forecast for the morning of December 9th, meaning that the NOGAPS has this system moving faster than other models. That's something we'll have to watch. Anyhow, the NOGAPS starts out its forecast with a heavy snow event in Colorado, Wyoming, Nebraska, Kansas, Iowa, South Dakota and more. The hardest hit areas would be nearest the storm system (located in western Arkansas). There is a large rain mass extending east of our system, and this could saturate the ground, making it harder for any possible snow to stick in the future.

12 hours later, we see our NOGAPS model taking the system, now with a central pressure of 1010 millibars, in the middle of Indiana. I want to stop and talk about that pressure reading. That is very weak! Much weaker than what other models were showing in above solutions. Already, with the timing issues and now this strength difference, I'm starting to question the NOGAPS model. As for precipitation, heavy snow is still ongoing in Iowa, Minnesota and Wisconsin into Michigan, with lighter snow in Kansas, Nebraska and South Dakota. Heavy rain continues to fall in the Northeast.

Despite the significant timing and strength differences with the NOGAPS and other solutions, the placement of warm air and precipitation does not seem all that far fetched, but I think that it's best to discount the NOGAPS model in the face of these previously-mentioned issues.

It's time to take a look at the ensemble means and not just the models. This is the forecast for 5 days out from last night's 0z model run. The forecast is valid for the evening of December 9th. The GFS Ensembles (commonly called the GEFS) have our system pretty far south on the Indiana/Kentucky border, with some pretty good snow ongoing across the Midwest from Missouri to Wisconsin. Rain continues to fall from Houston to State College according to this average of all the GFS Ensemble members.

Moving forward 12 hours, it becomes apparent that the GFS Ensemble members are becoming more confident with the intensity of precipitation, as we see darker colors appearing in the Ohio Valley and Midwest. If this average of all GFS Ensemble members were to pan out, one would expect a good snow event across the Midwest and Ohio Valley, especially in Indiana and Kentucky into extreme western Tennessee. A potential squall line would be setting up in the Ohio Valley and Southeast, as we have that strong cold air mass crashing into a warmer air mass. The system's central minimum pressure is 1005 millibars, meaning that the GFS Ensemble members are taking this system fairly weakly.

The last forecast image from the GFS Ensemble members shows this system has now moved into the Northeast, now with a deepened central pressure of 1001 millibars, slightly strengthened from our previous image, which was about 12 hours ago. This forecast, now valid on the evening of December 10th, has heavy snow continuing to fall throughout parts of the Northeast, and heavy rain moving towards the East Coast.

So, we have marked out the GFS Ensembles, the GFS model, the NOGAPS model and the CMC model. Of all these solutions, I find the GFS model has a fair idea, although the GFS has been wobbling for a while, and I would like to see a more confident solution.

Either way, we're looking at a possible major snow event for the Midwest, Plains and Michigan. Areas in the Ohio Valley and Northeast would likely not see as much sticking snow, because already-fallen rain has warmed and saturated the ground, significantly melting any snow that tries to stick on the ground.