It has been noted that the GFS has an error with the jet stream after hour 108 on the latest 12z model run. This means that Irene is being steered too far east.
By Andrew at 12:54 PM No comments: Links to this post

This is the 9:30 AM CDT Update on Hurricane Irene.
Good morning everyone, this is the 9:30 AM briefing on Hurricane Irene. Irene is currently a Category 1 hurricane with maximum sustained winds of 80 mph/70 knots. Irene made landfall in Puerto Rico earlier today and is now moving westward. She may go over the Hispaniola area, which could diminish Irene. Let's study the tracks.

Here is the track from the National Hurricane Center. We see Irene projected to make a NW turn in coming days. Irene may scrape the Hispaniola area, and if she does, big things could happen. Hispaniola is known to be a tropical cyclone devastator, if not killer. If Irene goes just over the northern area, she may not be affected as much as she would going directly over the region. That would let Irene freely strengthen as rapidly as she pleases, which would be deadly. And at this stage, it will be making a US landfall. 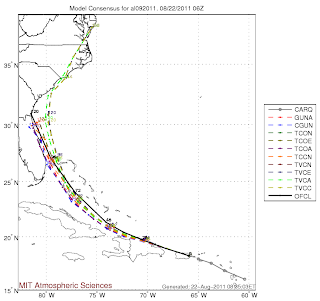 Here is a consensus of models forecasting for Irene. The black line is the NHC's forecast. While it may seem that the trend is to the east, it is actually roughly in the middle as a few models are a tad west than the NHC. Florida will likely be scraped by Irene if not hit, but impacts will be felt in that area. We do project Irene to make landfall in the Georgia/Carolinas area. After that, there is potential for Irene to shoot north and deluge the New York area with 9+ inches of rain. However, it is still a far ways out, but that is what is on the table right now. 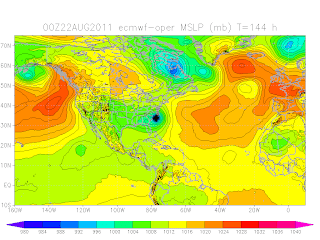 This is the ECMWF model. It displays a monster storm slamming into an area approximately in the Carolinas area. This could be a major hurricane, but with no wind speeds available, we will have to settle with the lowest pressures. This will likely be a category 2 or higher when it makes landfall.

Here is the GFS mean sea level pressure forecast for 1 pm CDT on August 27. It does definitely outline a major hurricane to strike the border of South Carolina and North Carolina. This scenario does worry me, as these states may not be as prepared for a hurricane as Florida is, much less a major hurricane. Rainfall and wind will be big factors in this storm, and we have wind gusts here below.

Wind gusts go as high as 90 knots on this chart just as the storm is making landfall.
I cannot emphasize how dangerous this storm MAY be. And that's the whole reason why it is dangerous. The models and us forecasters don't have an especially good handle on this storm, so it could shift large distances and strengths in only a few hours. With each run that becomes a lesser possibility, but there's always that chance.
By Andrew at 9:51 AM No comments: Links to this post