To continue the new trend of non-model forecasting, it appears the Plains will be at risk for a winter storm around December 2-3.

This is an image of winter storm Atlas, which produced massive snow totals across the Dakotas and killed thousands upon thousands of cattle. Atlas hit the Plains between October 5-6, and if you haven't guessed already, this storm is a part of the Lezak Recurring Cycle. The Lezak Recurring Cycle, or LRC, is a tool developed by meteorologist Gary Lezak that, in essence, can enable forecasters to predict the overall weather pattern months in advance. The gist of the LRC involves a cycling weather pattern that develops in October and November of each year; no pattern is the same from year to year. Around mid November, the LRC begins to repeat, meaning we start to see a similar weather pattern in mid November that we saw in early October. This means that the cycling pattern has begun, and it will continue to cycle on a 40-60 day interval for the next ~10 months before it dissipates over the following summer. With the new cycle determined to be ~57 days, the October 5-6 timeframe comes out to December 2-3 of this year.

While the track of an LRC storm is never 100% the same as last time, the upper level pattern should be similar enough to maintain at least a similar track. However, there are some caveats when you enter the teleconnection department. 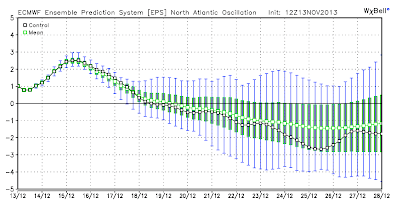 For one, the North Atlantic Oscillation is projected to be in moderately negative territory in the days leading up to this potential winter storm. If the energy that was Winter Storm Atlas in early October is able to be pushed down south enough this time around in December, it could get into the southern jet stream and may sneak up on the East Coast. For consistency's sake, I'll place my bets on a Plains winter storm again, but it's very possible we see this energy meander somewhere else like the Midwest, Ohio Valley, or even Northeast. This will become clearer in the weeks ahead, but right now, there is definitely some reason to believe that there may be a winter storm in the December 2-3 timeframe.

The idea of a Thanksgiving winter storm continues to lurk around, and now that the storm is of decent possibility, let's examine where this storm may go.

So what's all of this talk about a Thanksgiving winter storm? It's only November 11- how can I know this is actually a possibility? Well, we know that this is at least a possibility due to the weather experienced in the Bering Sea recently, and the weather East Asia will experience soon.

Take a look at the Bering sea in this two-panel reanalysis of the weather on November 8th. If you look closely, you can see that the Bering Sea was in the midst of a decent storm system on this date, just three days ago from today. This storm system passed along those waters in the midst of a mammoth ridge of high pressure just to the south. The 500mb height anomaly chart on the left best reflects this storm system, but its presence is confirmed on the right panel, which displays mean sea level pressure contour lines and denotations, as well as cloud cover. This Bering Sea storm has a connection to this potential Thanksgiving winter storm. Based on research done by Joe Renken, weather in the Bering Sea correlates to weather here in the US approximately 2.5 to 3 weeks after the Bering Sea weather anomaly occurs. This storm system in the Bering Sea happened on November 8th, and extrapolating that out 2.5 to 3 weeks ( 17-21 days) leads us to a potential storm system impacting the US around November 25 to 29. Considering November 28th is Thanksgiving, there does appear to be at least decent potential for a winter storm around the Turkey Day timeframe. But this is only scratching the surface of this storm's potential, and for that reason, we'll continue on with the investigation into this potential winter storm.

This is a forecast from the GFS Ensembles out to the Hour 168 timeframe. While all of the colors and lines may seem a little overwhelming, we're only going to focus our attention on East Asia, which is under the deep blue swath in the top left part of the left panel. Another correlation that has been proved effective is how weather in East Asia can be reciprocated in North America 6-10 days after the weather anomaly in East Asia. This includes the presence of storm systems or high pressure in East Asia. The November 18 forecast from both the GFS Ensembles and ECMWF model indicates that a deep negative height anomaly swath will slide down over Japan. If we extrapolate November 18th six to ten days out, we come up with a potential cold weather and storm system time frame of November 24 to 28. This narrows down the timeframe previously set out by the Bering Sea correlation, and if we match up the two timeframes (November 24-28 for the East Asian connection and November 25-29 for the Bering Sea connection), we come up with a November 24-29 potential timeframe for a storm, which can be isolated into the November 25-28 period, which is shown by both connections. Based on these two connections coming up with a common timeframe for a potential US storm system, confidence is rising that this event will happen.So, we have tentatively established that there will be a Thanksgiving winter storm. Where would this storm go? Well, we can get a decent idea from not only the aforementioned teleconnection discussion, but also from a set of composites I outlined for the Midwest and Northeast for major storm systems.Let's outline what we are expecting in terms of teleconnections for the time around Thanksgiving- more specifically, the November 24-29 period for when this storm could occur. The Arctic Oscillation is expected to be neutral or negative for this timeframe, meaning there may be cold air available for a winter storm and not just a regular storm system. The North Atlantic Oscillation should be in neutral or negative territory, which tells us the energy from this storm should be kept south in the Plains, following the probably-positive (or neutral) PNA, which ought to encourage this storm system to head into the Plains, Midwest or Ohio Valley. The EPO will most likely be negative, and this helps out the cold air idea that the negative Arctic Oscillation should try to establish for this storm system. So now that we've established that there should be a neutral/negative AO, a neutral/negative NAO, a neutral/positive PNA, and a negative EPO, let's take a look at some composites I made up for the Midwest for major winter storm systems and their relationships to teleconnections.
By accounting for a handful of major winter storms in the Midwest, I was able to create a composite of when winter storms are most likely to occur in this region. By looking at a total of 17 major winter storms, I compiled data that indicated a negative NAO, positive PNA, negative EPO and negative AO were most favorable for Midwest winter storms. Do those phases of the teleconnections sound familiar? They should, because they match up nearly perfectly with the forecasted teleconnections around Thanksgiving. I also collected data from these 17 storms on the Madden Julian Oscillation, and that told me that an overwhelming percent of the sampled winter storms involved the MJO being in Phases 5-8, with emphasis on Phases 7-8. This composite doesn't match up as well as the teleconnection information, but as I showed in the MJO discussion earlier, Phase 1 still has a very wet pattern for November for the Midwest and Ohio Valley.

Now, we will look at the latest forecasts of the North Atlantic Oscillation and the Pacific North American index.


The ECMWF ensembles project a steadily decreasing NAO from now until Thanksgiving day. This includes the timeframe of this potential winter storm, meaning that the southern jet stream (a slightly weaker jet stream that is usually found around the Gulf Coast and Southwest) should be active during this timeframe. This backs up previous ideas that this storm system should exit the Rockies from southern states like New Mexico or Arizona. Further analysis of the negative NAO doesn't reveal a decisive east or west-based pattern for the time around Thanksgiving.


The ECMWF ensemble forecast for the Pacific-North American index has been rather consistent in the past few runs, and in those cases, the PNA dropped down to a deep negative for the halfway point of November before spiking again in time for the 20th or 22nd of the month. Depending on how long this positive PNA spike lasts, we could see this storm shift northwards from the South, or continue east and possibly set its sights on the East Coast. Ensemble forecasts have been trending negative with the PNA since Monday, and if this negative PNA does happen, the East Coast may not see a proper chance with this storm. The Plains might get in on this storm if the negative PNA is strong enough, but because it appears that index is the wild card at this time, I don't want to go into speculation too much.

In all, it's looking like the Plains, Midwest and East Coast are at risk for this storm. To be more specific, I would highlight the Midwest and East Coast for the negative NAO, but until I can determine if it is west-based or east-based, and until the PNA is figured out, that's about as specific as I can get.

Andrew
By Andrew at 5:42 PM 2 comments: Links to this post