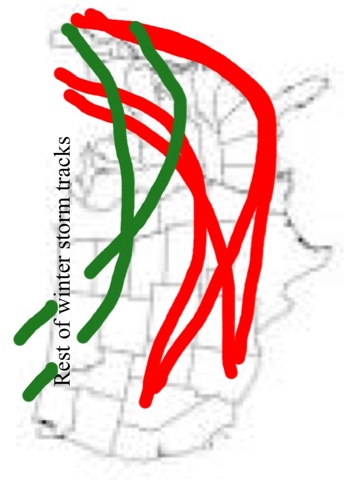 How Does the Stratosphere Warm so Quickly?

It's called a Sudden Stratospheric Warming (SSW).
A SSW happens when warming in the atmosphere is observed in significant fashion. Typically, stratospheric temperatures will rise by several tens of units over a few days. That is what we have seen in the last couple weeks.

Recently, we have been seeing a drop from the SSW, as observed by these CPC Temperatures.
By Andrew at 6:36 PM 1 comment: Links to this post 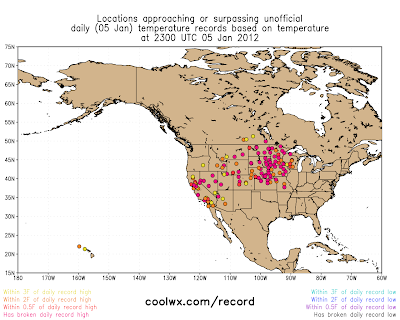 There are unofficially 67 stations that have broken daily records today, as a storm system in the far northwest pulls a warm front into the far north Great Lakes, thus the multiple dark pink dots right by the Upper Midwest. Comment on our Facebook Page if you've seen records broken today!
By Andrew at 5:59 PM No comments: Links to this post

We are watching the potential for a storm system to affect the East US. The system we are watching is the area circled in yellow. This system will be moving eastward from the Pacific. We can see several factors in play. First, we have the subtropical jet stream in the south that will likely have the most influence on the storm system as the storm system is closest to the subtropical jet stream. Another factor is the mid-latitude jet stream, or the jet stream you hear about on the TV or in newspapers. This jet stream will be wailing at over 120 MPH way back up in Canada before dipping south. Here's where things get interesting: It appears that the subtropical jet stream and this mid-latitude jet stream may be phasing together. This is seen as a larger jet stream after the proposed crossroads, as well as higher-speed winds. These jet streams may be forced together by the strong storm system moving south. This strong system, if it continues moving south, would essentially strengthen the jet stream even more, as pressure on the two jet streams would increase. Eventually, the system will be swept into the jet stream and be thrown out to sea. Following that, if there will be no more strong systems moving south, the mid-latitude jet stream would fling back north to its regular position.
The disturbance would continue to move east. Now, there is another proposed idea of what would happen if the jet stream moved too far south. If it moved too far south, it may move north over the system so it would be closer to its original position. If that happened, the storm system would most definitely go more NW than what would be anticipated. As of right now, thinking that the aforementioned scenario will not happen, the disturbance outlined in yellow would move across the South, and then out to sea. But if this huge disturbance pushing the jet streams down is swept east before the original disturbance is, we would see the storm system likely affect the Great Lakes and Midwest.

All in all, what does that mean?
It means that this could be a snowstorm for anyone in the East US. It depends on this very strong storm system, as well as jet stream placement, as well as if the original disturbance will even be present. So this is just a heads up.
We will continue looking into this, as many factors could complicate forecasts for this storm.
By Andrew at 5:41 PM 5 comments: Links to this post

I'm seeing a snowstorm for the Northeast around the 12th or a bit later. Accumulations will be around 6-8 inches tops, depending on the rate of strengthening from the Atlantic. The NAO will be neutral, so a snowstorm is still on the table for the NE. Additionally, the polar vortex will be something to watch, whether good or bad.
By Andrew at 3:00 PM 16 comments: Links to this post

StormWatch- The Next 16 Days

A disturbance coming off of the Alaskan Low regime in Alaska looks to come southward and rapidly deepen when it hits the Great Lakes. Seeing as how it is coming from Alaska would indicate that the Alaskan Low may be weakening. Another thing to watch for this storm is how cold it may be. Because it is coming from Alaska, it can be expected that cold temperatures will be present as the system moves southward. What you see on the left are the 6z GFS Ensembles at hour 180- January 12. We extended the dates to provide the days for when the storm affects the North Plains and eventually the Eastern Great Lakes. Something interesting is how all of the ensembles are showing this, which greatly raises my confidence level. So here's my prediction for this storm.
Up to 10 inches in the Upper Great Lakes. Rain for the Mid-Atlantic and far eastern Ohio Valley. Blizzard conditions possible in Wisconsin and parts of Minnesota. Depending on the rate at which the storm rapidly strengthens, accumulations may exceed 12 inches.

Some GFS Ensembles are showing a storm system forming across the US. There is some indication that the Eastern Half of the US. I would not be surprised with this storm formation, as the persistent ridges interrupting the Polar Vortex would be pushing small parts of the Alaskan Low out into the Pacific or Canada to affect the US. Those ensembles are on the left at hour 324- January 18. In case you don't know, the storms are in the blue. If there are deeper shades of blue, or even pink, that indicates a stronger low pressure system. My confidence level is too low to forecast for this storm.
By Andrew at 7:29 AM 11 comments: Links to this post

For 1 hour, you can ask as many questions as you want regarding this winter, and have them answered by me.
Here's some examples for possible questions:

Anything you can think of that has to do with winter you can ask.
We will answer as many questions as we can.
So here's the details.

FAQ
How many questions can I ask?
-Unlimited.

Will all of my questions be answered?
-We will try our best to answer as many as we can, but as soon as it's 1:00 PM CST we will not be answering any more questions.

Stay tuned for more details!
By Andrew at 6:33 AM No comments: Links to this post