I'm monitoring the potential for a Valentine's Day snowstorm.

With this northwest flow would come increased chances for snowstorms for the Northeast, and it looks like we could see one of those storms around the Valentine's Day time period. 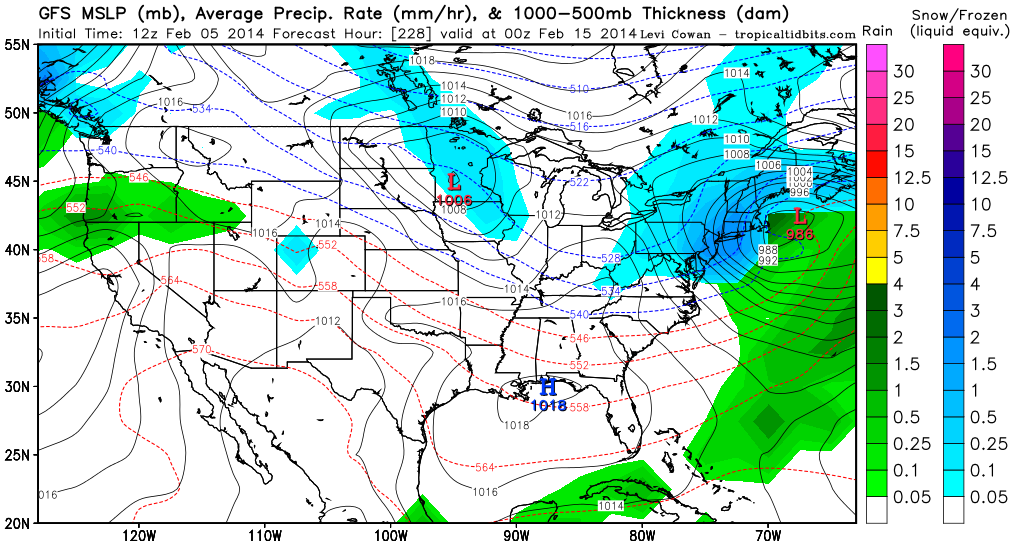 The long range GFS model shows heavy snowfall hitting the Northeast in response to a storm system moving away from the coast. The snowfall would likely be maximized along coastal regions, including Massachusetts, New Jersey, and the coastal portion of New York. The northwest flow pattern is clearly defined here, not only by the presence of a coastal storm, but also with the southeast-moving 1000-500mb thickness contours, where blues show colder weather and reds indicate warmer weather. The stray clipper system in Minnesota also alludes to the presence of that northwest flow.

While the GFS is obviously in its inaccurate long range forecast at this point, and there is every chance that this storm may not end up happening, I'm thinking the East Coast will see a shot at snowfall in the mid February time period. Whether it be an amplified clipper system that hits the coast and gives big snows to the Northeast, or a storm system crawling north from the Southeast, I'm liking the East Coast for the snowier opportunities come mid-February. The prevailing northwest flow, which model guidance is in good agreement on, would not support a Midwest, Plains or Ohio Valley major snow event. Alberta Clipper systems would be more likely.