-Tomorrow, I will have a post basically confirming all suspicions of a polar vortex collapse at 12:00 PM central time. I'll describe the effects of cold as well.

-An update will be made to the Current Weather page tomorrow.

-I will attempt to make an update to the Models page.

Andrew
By Andrew at 7:46 PM 4 comments: Links to this post

A 50mb animation of temperature anomalies shows we are seeing that sudden stratospheric warming (SSW) ongoing across Canada and the Arctic at this time. This comes after a previous SSW in the opening days of December. But I want to point something out. Watch the last few frames of this animation. See how that warming starts to propagate towards Japan? This could be a second warming that may strike as the current warming is ongoing. Based on how the Japanese warming cell's contour lines are expanding northeast towards the ongoing SSW, I see reason to believe this Japanese cell of warming may also move towards the Arctic and strengthen the ongoing SSW.

Here's what I want to watch as far as model forecasts go. I am staying with the ECMWF model today out of confidence over the GFS, and because it displays information better than the GFS. Let's start with the far upper stratosphere.

This is the 1 millibar forecast for the stratosphere over the Northern Hemisphere. The US is on the left side of the image; you can make out the shape of Alaska in dark blue. I want to point out the main attraction, the big red blot over Europe. This is the warm air from the SSW. It is doing significant damage to the polar vortex, as I went back a few forecast timeframes and found significant weakening with every 24 hour image. This confirms my theory that the polar vortex will most likely collapse in the upper stratosphere first, if there is a stratosphere collapse to be had.

I'll show these next two images together due to their similarities.

The top image is the pressure and temperature forecast at 20 millibars, and the bottom image has the 50 millibar forecast. We want to pay close attention to the pressure lines here. Both images show two areas where there are multiple enclosed circles and/or ovals. These are daughter polar vortices. They signify that the main polar vortex has split and made multiple daughter cells. In both images, one vortex is over Canada and the other covers Eurasia. The reason these two images are significant is because the vortices are so far apart, and the split is so massive that I find it hard to believe the polar vortex can fully recover from this. The vortex is on its knees at this point- one more good SSW and collapse of multiple stratospheric levels of the polar vortex appears probable.

The last two images to show involve potential vorticity, or PV. In areas of raised PV, low pressure systems are commonly found, in this case the polar vortex (vortices). The top image shows presumably the PV values for the middle of the stratosphere, while the second image shows PV values for the upper stratosphere. Let's analyze the upper stratospheric image first (bottom image). We see two areas of slightly raised PV, indicating two daughter polar vortices. But they are so weak that they don't even constitue themselves to be fully-functioning polar vortices. This is what I call a good collapse of the polar vortex.
As for the top image in the mid-stratosphere, we see one compact vortex and one elongated vortex. The compact vortex is placed in Canada, meaning very cold conditions can be expected in that nation come late January-early February. The elongated polar vortex is the superior one here, but is gradually weakening per review of multiple forecast hours at this same stratospheric level. I believe weakening should continue with both polar vortices, seeing as even lower PV values are trying to funnel in the space between the two vortices. If that happens, the chances of reconciliation between the two vortices becomes lower, the chances of a collapse are raised.

The last image to show is a zonal wind forecast for Day 10, the same forecast time as the other forecast images. Here, we see three items of interest: 1) the oranges and reds in the middle of the image, 2) the blues in the right corner of the image, and 3) a finger of blues between the numbers 30 and 100 on the far left side of the image.
(1): The oranges and reds suggest winds in the stratosphere that are favorable for polar vortex formation and sustainment. The winds in the stratosphere are working to hold the vortex together in the areas where there are oranges and reds. The warmer the color, the more favorable the winds are to polar vortex sustainment. This spread of oranges used to cover the entire image, but has now eroded in the face of our next item of interest.

(3): That finger of blues between the 30 millibar area and 100 millibar area shows yet another wind-based phenomenon in the stratosphere called the Quasi-Biennial Oscillation, or QBO. In a negative QBO, one encounters winds that are unfavorable to sustainment of the polar vortex, while the positive QBO brings about favorable polar vortex winds. Considering that finger of blues exists in the regions mentioned, I find a negative QBO to be in existence, another piece of the puzzle detrimental to the polar vortex.

In summary, the polar vortex is definitely taking multiple hits and will experience collapse in the upper stratosphere if these forecasts verify. If the split in the polar vortex continues and even strengthens, we could see a collapse in the middle and lower stratosphere later on in January, which would then make for a cold February. I will discuss that at a later date.

Andrew
By Andrew at 3:47 PM No comments: Links to this post

The GFS model has been trending with the potential for a storm in this timeframe for several days now. Let's take a closer look.

This forecast for the evening of January 11th shows the storm system in the southern Midwest, producing massive amounts of precipitation over the region. Snow appears to be falling in Oklahoma, Kansas and Texas, to name a few, but only light snow. Extreme northeast Texas appears to be receiving quite a bit of accumulating snow. On the warm side of the system, a partially-linear precipitation signal is appearing in Arkansas, Texas and Louisiana, something that may hint at a severe weather situation. Further to the northeast, we see an arm of heavier rain and maybe embedded thunderstorms in the Virginias, Kentucky and Tennessee. Lighter rain is ongoing in the Ohio Valley and Northeast.

The GFS has been trending with this solution of a storm coming through the South and shooting northeast through the Ohio Valley to bring accumulating snows to portions of the Ohio Valley and Midwest. The cold air that follows would likely bring fair lake effect snow to the Great Lakes.

Moving ahead 12 hours, we find a lot of heavy precipitation in the Ohio Valley, falling as -that's right- snow. That purple color is north of the blue rain/snow line, and that little 'x' in the middle of that purple color shows 1.95 inches of precipitation, meaning nearly 20 inches of snow could be falling there! Heavy snow would also be going in in the rest of the Ohio Valley, with Midwestern states like Illinois and Missouri getting the lighter snows.

This has indeed been showing up for a long time on the GFS model, meaning it has a better potential to happen. Now, in the end, it might not even happen, but the fact that the GFS has been so consistent on bringing this storm back for each model run tells me that confidence is only growing with regards to this system.

I have been calling for a polar vortex breakdown and possible collapse for a while now, and I now think it is time to introduce the possibility that January-February 2012 could resemble the infamous January 1985. 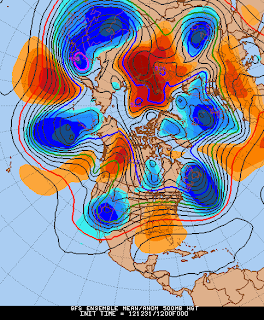 This reanalysis image, once again from weatheradvance.com, shows what the month of January 1985 was like as a whole. We saw high pressure dominating the northeast Pacific, low pressure in Asia, and a strong high pressure regime in the Arctic, which appears to have been a base for the exile of the polar vortex. Low pressure was found in the Plains and general North US as the polar vortex was displaced south. 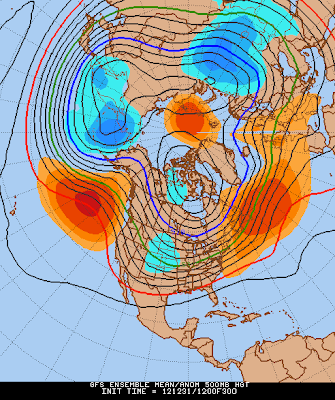 Here's the strikingly scary part- the long range forecast from the GFS Ensembles closely resembles this reanalysis image. We see high pressure in both the northeast Pacific and north Atlantic. Low pressure is present in the Bering Sea and Eurasia. A triangle of high pressure systems from the Pacific, Atlantic and Arctic shows that we are once again looking at a potential exile of the polar vortex. Look closely at the US. Slight low pressure is forecasted in the North US in an eerily similar move to January 1985. The center of the polar vortex, placed west of Greenland and shown as several ovals, is in almost the exact same spot as the polar vortex in December 1985, once again shown as several ovals.

Let me set the record straight- I am not calling for another January 1985. What I AM saying is that signs are pointing to a SIMILAR set-up as January 1985. That in NO WAY means the polar vortex will once again slip south- it means the potential is there, but NOT CERTAIN.